I finished my workday yesterday by doing a quick search online for commentary about the play I was about to see at the Stanley Industrial Alliance Stage (2750 Granville St). The most intriguing post was from cast member Scott Bellis: It’s opening night for #PrideAndPrejudice @theArtsClub. It’s a beautiful adaptation and we have a great cast. Plus I get to wear a dress.” With a story that is so familiar, it call comes down to the cast and crew’s production and after seeing that message I was certainly excited to see what was in store.

Pride and Prejudice at The Arts Club

It was a soggy Vancouver evening, where the pink glow from the Stanley’s marquee glistened off the tops of umbrellas that waited in the box office line. My mother and I picked up our tickets and enjoyed a quick dinner over at West (2881 Granville St) before returning for the show. I’ve read the novel by Jane Austen, and I’ve seen my share of Hollywood heartthrobs portray Mr Darcy on screen, but this was my first theatrical experience for Pride and Prejudice. 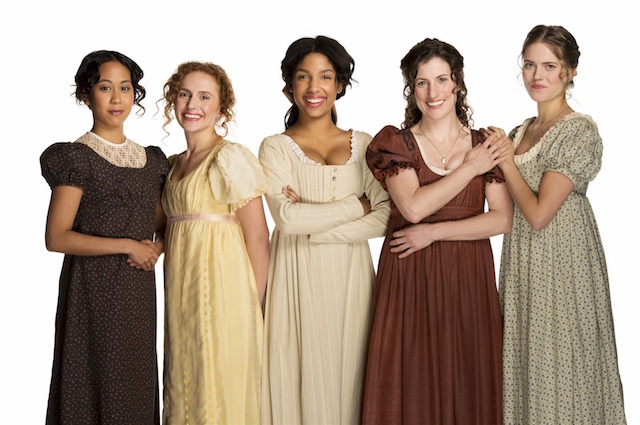 Cast of Pride and Prejudice. Photo by David Cooper

The set seemed to be pared down, a simple backdrop of watercolour paintings that set the scene, and two musicians — a violinist and guitarist — on the side of the stage that provided a score, and doubled as Mr & Mrs Gardiner. The simplicity of the design was in itself a feat, as Artistic Director Bill Millerd comments in his Bill’s Notes guide, Pride and Prejudice is one of the largest and most lavish plays The Arts Club has produced.

The play began and Janet Munsil’s adaptation bounced onto the stage with a string of jubilant Bennet daughters. With such a well-known work, there must have been challenges but I believe they were met with the lovely and lively portrayals by the cast.

Scott Bellis, whose post on Twitter piqued my interest earlier in the day presented the best Mr Collins I have seen. His interactions with Naomi Wright as Elizabeth Bennet were priceless and as @PeterCarlone commented on Twitter: “The exchange between Mr Collins and Elizabeth is tinder in a nutshell. #letMeSendyouAPicofMyEstate.”

Indeed Bellis did don a dress to play Mrs Reynolds at Pemberley, which the audience loved. All of the Bennet girls were delightful: Sarah Roa as Mary Bennet was perfectly and adorably bookish, Raylene Harewood and Kayla Deorksen were fun and flirtatious as Lydia and Kitty, and Kaitlin Williams was angelic as Jane.

Amanda Lisman was a perfectly snobbish Caroline Bingley, that made the audience both gasp and giggle on a few occasions, and Daryl King as her brother Charles Bingley was as smitten with Jane as you would imagine. David Marr as exasperated patriarch Mr Bennet, and Katey Wright as the noisy and foolish Mrs Bennet were also audience favourites.

Of course there is also Mr Darcy, Eric Craig, whom the audience judged harshly before he proved himself (swoon) worthy enough for our Elizabeth.

At times it was hard to hear the dialogue when actors turned to face one another at centre stage (full disclosure: we were seated in the right orchestra and I am hard of hearing on my right side). Other than that, I found the entire production rather agreeable.

What I thought was a simplistic set at the start of the play turned out be a beautifully choreographed and animated stage. The lighting of lanterns and chandeliers, and timed out placement of chairs around a dining table, added movement that was soft and pleasant, like the score. The warm lighting made me long for a stroll across the meadow to pluck spring flowers before I stepped back into the dark, cold, and rainy Vancouver night.

Also on Miss604.com
« Win Tickets to See Wanda Sykes in Vancouver
Things to do in Vancouver Family Day Long Weekend »