The 12th annual Rogers Santa Claus Parade will hit the streets of Downtown Vancouver on Sunday, December 6, 2015 at 1:00pm in support of the Greater Vancouver Food Bank Society. This festive event, including many local organizations and businesses, is a kick-off to the holiday season for many and will be filled with family fun.

Starting out at 1:00pm, the parade will begin at West Georgia Street and Broughton, travel east along West Georgia, turn south on Howe and finish at Howe and Davie. Over 300,000 spectators flock to this event each year so be sure to arrive early to stake out your viewing spot. 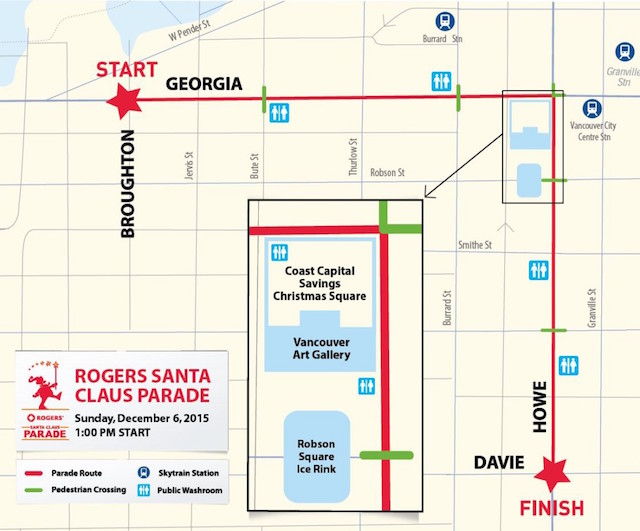 You can also enjoy many activities around the Coast Capital Savings Christmas Square (in front of the Vancouver Art Gallery) that will be open form 10:30am to 1:00pm. The square will have a gingerbread decorating station, face painting, letters to Santa station, and an entertainment stage featuring exciting music and dancing performances. That is where you can also drop off your donations to the Greater Vancouver Food Bank Society.

Most Needed Items for the Food Bank

Along the route, volunteers will collect non-perishable food items and monetary donations on behalf of the Greater Vancouver Food Bank Society. For every $1 donated, the Food Bank can purchase $3 worth of food – so remember those loonies on Parade Day!

I have 4 VIP seats to give away in the Rogers Santa Claus Parade VIP viewing area. Here’s how you can enter to win:

Support @VanFoodBank + RT to enter to win VIP seats for the @RogersSCParade from @Miss604 http://ow.ly/UOvzk

Follow the parade on Facebook and Twitter with #RogersSantaClausParade for the latest updates. I will draw one winner at random from all entries at 12:00pm on Wednesday, November 25, 2015.

Update The winner is @lainiesoleil77!