Every day the Vancouver skyline seems to change, with new glass walls rising above the rooftops of previous generations. It’s not often that a whole tower is taken down though, and entirely replaced with another. That’s what happened to the Georgia Medical-Dental Building in 1989, when the 17-storey tower was razed and the 23-storey Cathedral Place tower popped up in its place.

Built in 1927-29, the Medical-Dental Building was the first art deco skyscraper built in Vancouver and was designed by the same architects who did the Marine Building, McCarter and Nairne. “Like the Marine Building it rose in tiers, topped by pale terra cotta that dripped off the brick facade like ice cream,” reported the Vancouver Sun. Chuck Davis wrote about the features of the building in his History of Metropolitan Vancouver: “[The Medical-Dental Building] was richly embellished with whimsical ornaments like plump little terra cotta owls and other birds, lions and horses. The building was adorned with medical, religious and mythological symbols around the main door. Most of its tenants were doctors, dentists and the like. Easily the most famous distinguishing features on the building were three 11-foot-high terra cotta statues of nursing sisters in First World War uniforms, one perched on each of the building’s three visible corners.” 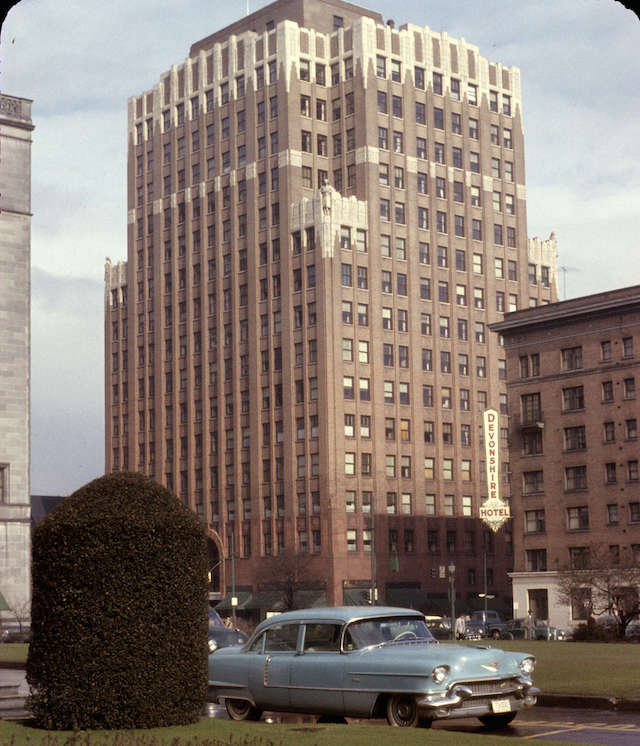 At about the 10th-storey level, the building was graced with 11-foot-high, terra cotta statues depicting a Nursing Sister of World War I, one on each of the building’s three visible corners. Architects John Young McCarter (1886-1981) and George Colvil Nairne (1884-1953) had both served overseas during World War I. McCarter was seriously wounded and credited the Nursing Sisters with saving his life. They founded their architectural firm in 1921, and when they obtained the contract for the Medical Dental Building, they decided to honor the Nursing Sisters. The sculptures were designed by Joseph Francis Watson. A local joke among the medical users of the building was that the statues represented the Rhea Sisters – Gono, Dia, and Pyo. [Source: Vancouver’s Monuments To Nurses by Nina Rumen, RN, BScN / RNABC History of Nursing Group] 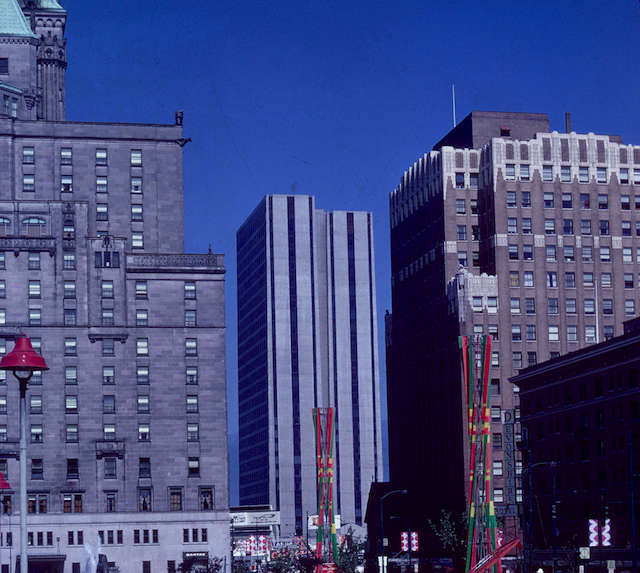 As a young girl, out on one of our many family Sunday drives, I distinctly recall looking up at the “Nursing Sisters”. In fact, it’s the only building I remember admiring when I was a child, through the window of our van. This memory must have been before I was even 10 years old as the building was imploded in 1989.

Following the public outcry that surrounded the dramatic demolition of the Georgia Medical Dental Building, City Council introduced a policy to prevent the future demolition of “A”-listed heritage buildings.

“Council has instructed that prior to consideration of a proposal that includes demolition of an “A” listed building, a formal independent consultant’s report on the physical condition and economic viability of retaining the building be reviewed by the Director of Planning. The report is at the expense of the applicant.” Council reaffirmed this policy on April 18, 1991. [Heritage Vancouver] 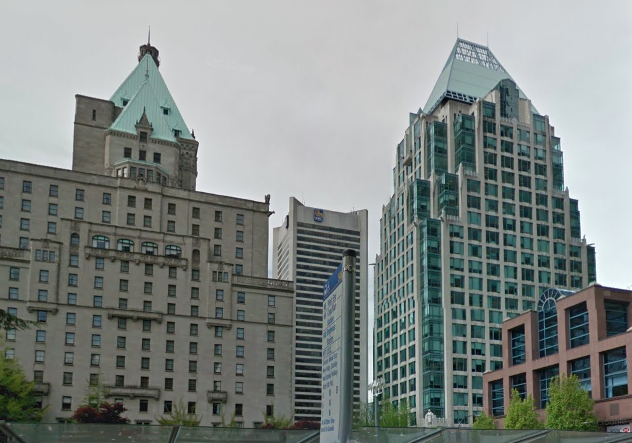 The Shaw Tower at Cathedral Place is a dramatic postmodern structure designed by Vancouver architect Paul Merrick. Cathedral Place was developed through a joint venture with Sir Run Run Shaw of Hong Kong to realize a long-time dream of Charles Shon to redevelop the Georgia Medical-Dental Building site creating an enduring architectural landmark. 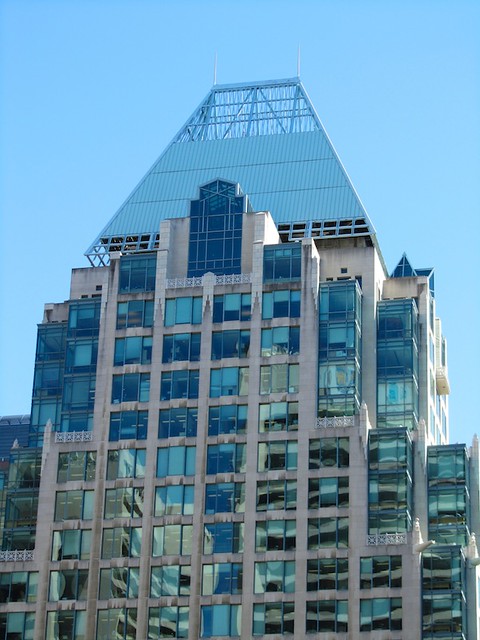 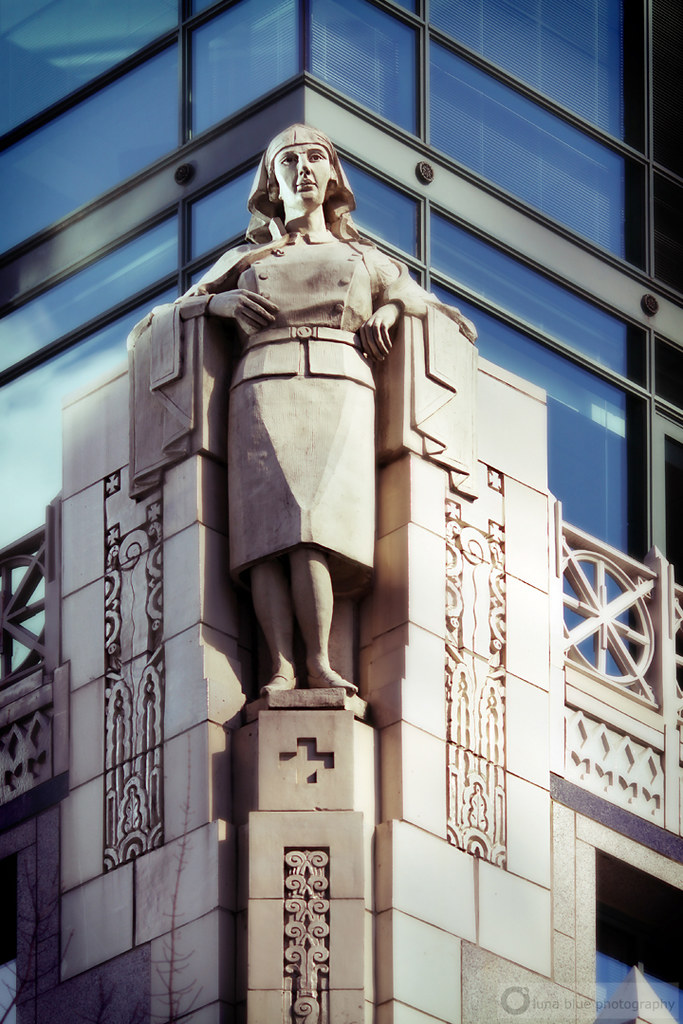 A public campaign was raised to save the original statues for the new building. However, as these proved both extremely heavy and difficult to remove from the original building, replicas had to be made. When the new tower opened in 1991, the replicas were mounted at about the 3rd-storey level, easily visible from the streets. [Source: Vancouver’s Monuments To Nurses by Nina Rumen, RN, BScN / RNABC History of Nursing Group] 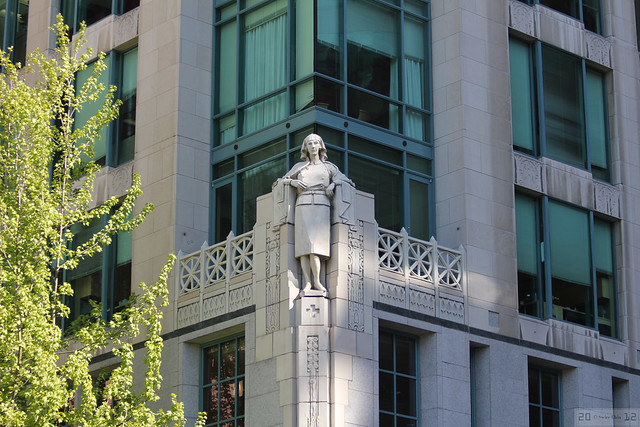 In 1992, the Museum of Vancouver took the least-damaged head from one of the broken statues for safe-keeping; this was also patched and repaired and is held for display by the Museum. A fibre-glass replica of the head also is on display in the lobby of Cathedral Place.

“I quite like Cathedral Place,” writes Eve Lazarus. “It’s nicely tiered, the roof fits in with the Hotel Vancouver across the street, and it even has a few nurses, gargoyles and lions pasted about as a reminder of the former building. Everyone over 35 likely remembers the three nurses in their starchy World War 1 uniforms looking down from their 11th storey parapets.”

While walking back from the Whitecaps FC 2 match at UBC’s Thunderbird Stadium last Sunday I looked up at the corner of the Technology Enterprise Facility III building on campus and spotted some familiar faces. Looking down from fifth floor there they were, the Nursing Sisters! It felt as though I spotted an Expo86 bench in White Rock or a repurposed Vancouver 2010 sign — but I felt 10 times the excitement. 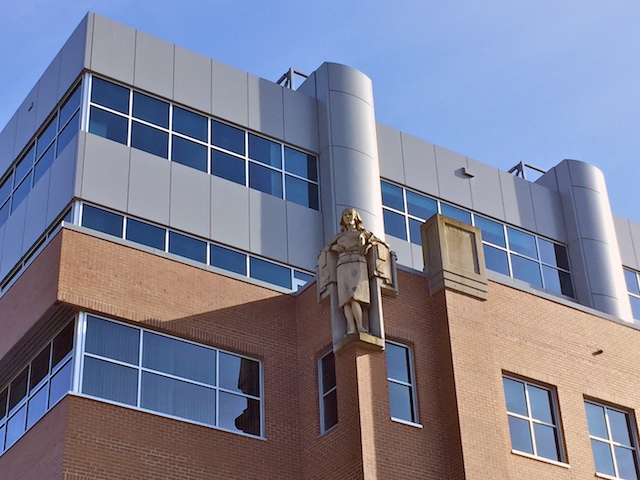 “A Vancouver landmark, [the Medical-Dental Building] was the focus of an intense public preservation campaign. Although the battle to save the building was lost, Discovery Parks purchased and restored the salvaged terra cotta, with proceeds used to benefit the Vancouver Heritage Foundation.” 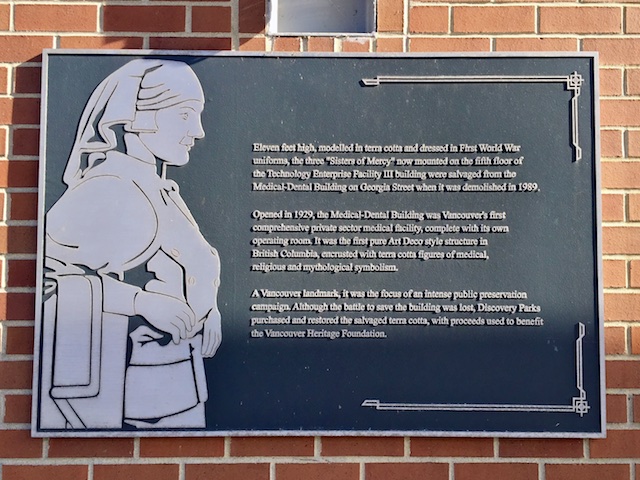 I have yet to confirm whether these are another set of replicas (according the several sources they are) but the plaque on the building seems to imply that they are in fact the original, restored terra-cotta pieces. Either way, if we look close enough, there are pieces of local history all around us, and we just have to keep telling their story.