This week, Vancouver Opera presents the last three performances of Die Fledermaus (The Bat), the Austrian operetta composed by Johann Strauss Jr., adapted by UBC’s Nancy Hermiston to include theatrical dialogue in English with timely or local references. 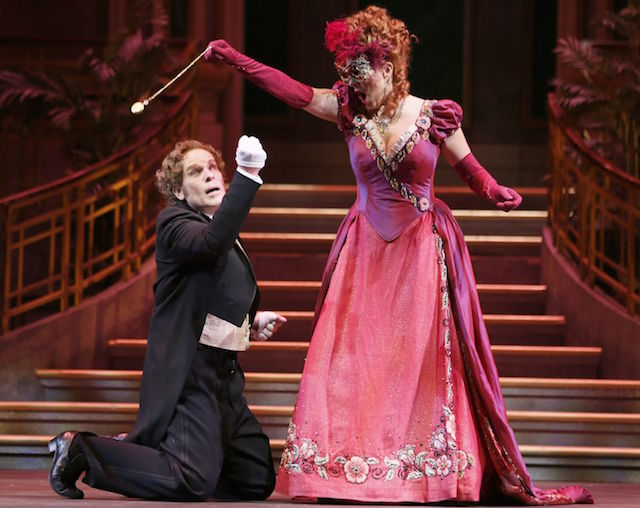 Eisenstein (Roger Honeywell) is dismayed to find that a disguised Rosalinde (Joyce El-Khoury) has his watch. Photo by Tim Matheson

Set it old Vienna, chambermaid Adele (Suzanne Ridgen) has received word that her ballerina sister has been invited to attend a lavish ball hosted by Prince Orlovsky (Julie Boulianne) and wants her to come. Meanwhile, her employer, Gabriel von Eisenstein (Roger Honeywell) is due to go to prison when his friend, Dr. Faulk (Hugh Russell), convinces him to attend the same ball before he turns himself in. His wife, Rosalinde (Joyce El-Khoury), who being pursued by her former Italian lover Alfred (David Pomeroy), gets word off her husbands plan and decides to attend the ball in disguise as a Hungarian countess to catch him red handed in his philandering ways. What follows is a story about mistaken identities, love, and celebration–all to the music Johann Strauss, Jr., AKA the “The Waltz King.”

What makes this production unique is that it’s a musical-theatrical hybrid. Most of the time, I found the modern-day English helpful to understand the plot as it can be confusing (after all, it’s a story about an elaborate prank and I don’t understand German); however, sometimes I felt the dialogue interrupted the musicality of the performance. For instance, Christopher Gaze, Artistic Director of Bard on the Beach, a great actor in his own right, has a massive monologue at the beginning of Act III, poking fun at his own public personae as “Mr. Shakespeare” in town. I felt this went on too long and became tired of the joke. This is no fault of Mr. Gaze, but of the writing, which I felt was sometimes too on the nose.

The performances, however, were phenomenal. A performer would be singing the most exquisite aria in one moment, and then transform into a powerful stage actor (I wondered if they got tips from Mr. Gaze?) the next. All in all, it was an impressive and highly-entertaining evening and left me amazed because who knew opera could be this light-hearted and funny?

Catch Die Fledermaus at the Queen Elizabeth Theatre on March 5th, March 7th, and a matinée on March 8th. Follow Vancouver Opera on Twitter and Facebook for more information.