Spring has sprung early in Vancouver and the tree branches outside my window in the West End are a hive of activity. Birds in nests, green buds ready to create summer’s canopy, and squirrels leaping from limb to limb, excitedly foraging for the season. One of the creatures I see most often is the fluffy grey squirrel, a creature that’s only been in Vancouver since 1914. 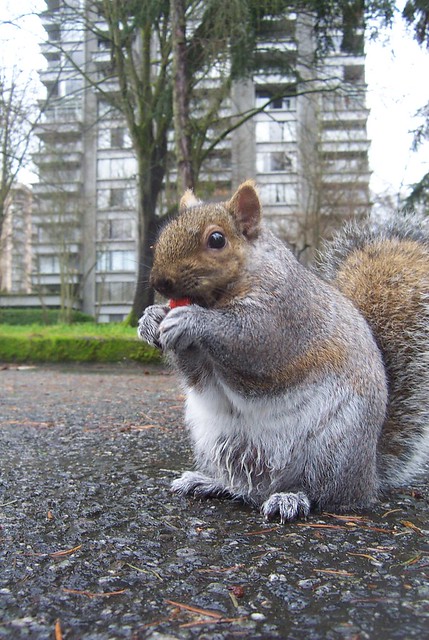 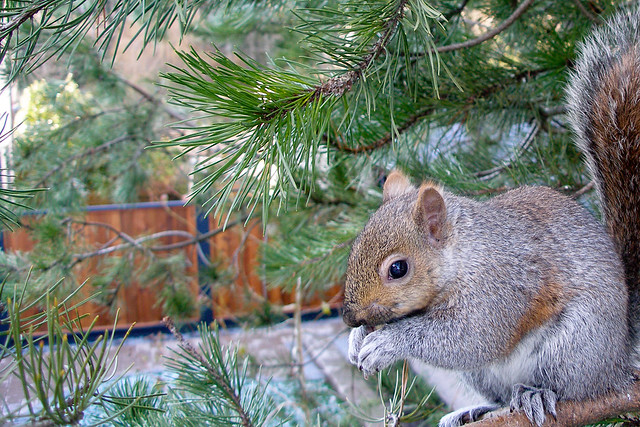 The most common squirrel in the province’s urban centres, the Eastern Grey Squirrel (Sciurus carolinensis) was released into Stanley Park in 1914 and introduced to Vancouver Island in 1966, where it causes a particular threat to Garry Oak trees. According to the BC SPCA:

“Eastern Grey Squirrels are much larger than native squirrels, are either grey or black in colour, and flourish in urban environments. The increasing number of Eastern Grey Squirrels is often blamed for the decrease in native squirrel populations, however given that these squirrels have different food and shelter preferences, its more likely that urban development and the loss of coniferous forests is responsible.”

So how did this squirrel get here just over 100 years ago? Some reports say that the squirrels were a gift from the Mayor of New York City in 1909 but Jolene from Stanley Park History found that in 1909 Vancouver Park Boar Chair, Charles Tisdall, wrote to various American cities in search of purchasing “grey squirrels” for Stanley Park.

“The City of Vancouver Archives holds numerous other letters over several years relating to this quest. There is also a receipt made out to Chas. Tisdall which reads, “2 doz grey squirrels to be shipped as soon as possible – $40″. The receipt is from Wenz & Mackensen, Naturalists, Yardley, Pennsylvania and dated January 3, 1910 […] According to other documents at Archives, it appears there was a problem securing those 2 dozen and the search for replacements promptly continued.”

However it came to be in Stanley Park, the Eastern Grey Squirrel has learned to live (and thrive) alongside two other park squirrels. The Vancouver Park Board says that the Douglas Squirrel, which is reddish brown and half the size of the Eastern Grey, is much less likely to approach people for food, and tends to live in more forested areas. The nocturnal Northern Flying Squirrel is very rare and has the amazing ability to glide from the tree tops with the use of loose skin flaps.

The Eastern Grey Squirrel, while cute, fuzzy, and fun to watch bounce around, is actually listed in by the Invasive Species Specialist Group (ISSG) as one of the Top 100 Invasive Species in the world.

Also on Miss604.com
« Stanley Park Easter Train
What to do When You Spot a Whale or Dolphin »