“This is 2015, this is what soul music is,” Adam Castaneda of Houston’s The Suffers told me last night at the Sunset Tavern in Seattle. The 10-member band is currently on a West Coast tour to spread their Gulf Coast Soul sound to those hungry for real, exciting, and energizing live music. Somewhere along the way, I also got the recipe for great gumbo. 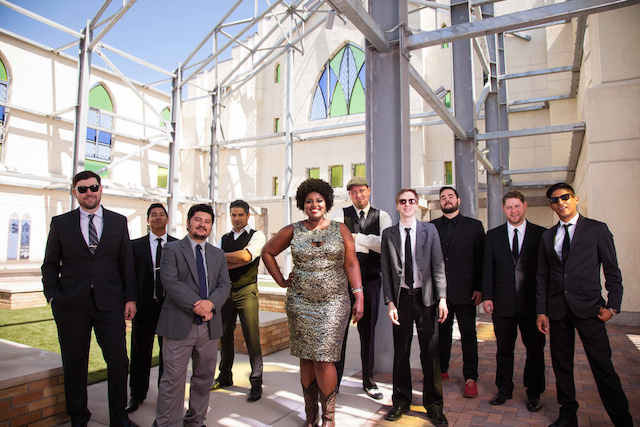 The Suffers’ Recipe for Success

I met Adam in the front room of the Sunset Tavern on Ballard Ave NW, under glowing red lights and next to the hum of the old school photobooth, in which we couldn’t resist posing following the interview. Painted above the front door in cursive letters it stated that the venue’s capacity was 99 people, meaning over 10% of the people in the back room tonight would be on stage — meaning we were about to get walloped with some amazing sound.

Adam, who plays bass, formed the Suffers in 2010 with keyboardist Pat Kelly and the pair carefully assembled the group piece by piece over several months, adding each ingredient to the mix along with the cherry on top, powerful and energetic vocalist Kam Franklin.

“If you haven’t been to the Gulf Coast or spent much time there, there are a lot of different cultures that come together.” Adam says that Houston is a melting pot, especially when it comes to music. Country, classical, blues, jazz, get stirred up with Cajun music, combinations of caribbean and native music, and African melodies. Pour latin influences into the mix such as Tejano music, Colombian influences, and you’ve got a hearty combination.

“It may not necessarily be soul as it’s defined in record charts and in stores, but it’s all very soulful music, and it all gets mixed up.” While avoiding a throwback or retro vibe, The Suffers manage to show what soul means to them, in this day and age.

“It’s a gumbo, which is not just in New Orleans it’s all over the place.” Starting with your base, the roux, each chef adds in their own ingredients to make their gumbo unique. “Some put a little crab in it, or some shrimp. Some people put chicken in it or some other combination and it just makes a gumbo, it’s a stew. No matter what they put it in, it’s always good.” 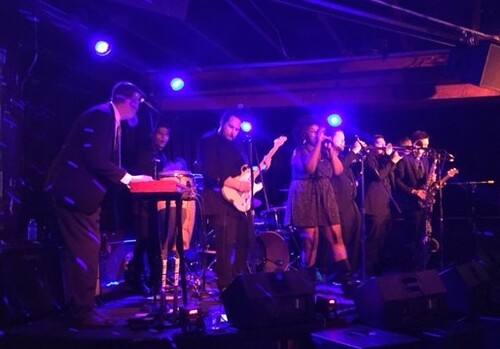 The band took to the stage shortly after 9:30pm, did a quick round of sound checks, then turned inward toward Nick on the drums to let out a battle cry in unison with their arms in the air. The music that then filled the room was in perfect harmony, and I was able to savour every note.

The first song rolled into the next, and the next, as the group barely seemed to pause, boiling over with energy and keeping the motion and the music flowing. Even the lights of the disco ball that slowly turned in the corner couldn’t keep up until they cruised into Giver, an 8-minute ballad.

Funk, soul, and definite ska influences tickled my ear drums. Michelle, with whom I made the trip to Seattle, leaned over and mouthed the words, “She’s amazing!” I nodded, took another sip of my local Chuckanut Pilsner, and felt even more glee as audience members began to let loose on the dance floor in front of the horn section. Bringing together a solid, smile-inducing, toe-tapping, core-shaking, sound with everything from bongo drums and a keyboard to bass and a trombone, takes talent and The Suffers have it in spades.

As it turns out, I was standing next to Lynval Golding, of legendary new wave/ska band The Specials, for almost the entire show, after which he recorded a video message standing alongside lead singer Kam Franklin. “Tonight I fell in love with this wonderful, amazing, beautiful lady,” Golding says in the video.

“Music has got such strength,” he added. “Good music is what it’s all about and this is a fantastic band.” Golding, who says he doesn’t usually get excited but was actually beaming with the joy from The Suffers’ performance, signed off by saying they were wonderful, wicked, excellent, and I felt exactly the same way — and hungry for more.

Recent winners of five Houston Press Music Awards, you’ll be able to experience The Suffers live in the “604” this summer at a music festival — I can’t tell you which just yet — but you’ll want to make sure to set a reminder to catch them on stage. Adam told me that the band loves festival settings as much as small venues. “We’ve all been playing music for a long time and in front of different size crowds, it’s just a different thrill. Whether it’s a barbecue or a sushi dinner, both are great you know. Bring your appetite!”

Update April 1, 2015: I can now announce that The Suffers will be playing at the Pemberton Music Festival this July in Pemberton, BC.

Share14
Tweet1
Share2
Pin
Email
Reddit
WhatsApp
17 Shares
Current Contests on Miss604
*All contests are open to residents of Canada only, unless otherwise stated. Contest timelines are published on each individual post along with entry methods. Some contests may only be open to those 19 years of age and older. Winners are announced on the contest blog posts. Contest policy »
Comments are closed on this post
Advertisement