I have curated the Miss604 Flickr Pool for the last seven years and I believe that no other animal has piqued the interest of local photographers quite like Yoda the Pug, aka The Red Baron. However upon looking around the corners of the internet to find out more about Yoda, I discovered that his pet parent, Mad Dog — who made his signature sidecar — was even more of a legend.

Mad Dog, referred to as the “Heritage Punk of Vancouver”, was featured earlier this year in a web series about The Real People of Vancouver. This multi-part documentary aims to showcase people who inspire, intrigue, who stand out from the crowd, and who the creators of the series believe should have their stories told. 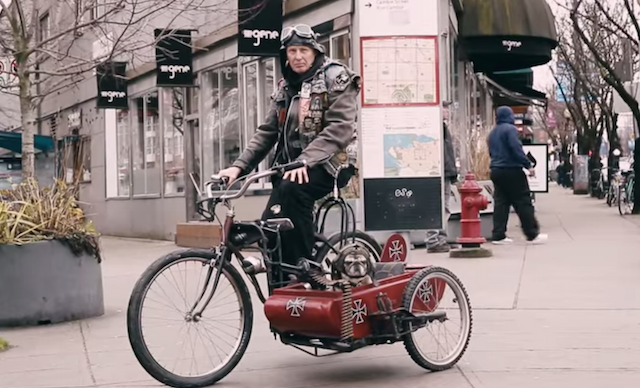 Still from the Real People of Vancouver video

I started watching a 25 minute clip and within the first 30 seconds Bev Davies began introducing Mad Dog. Davies, a legendary punk rock photographer, is one of my local idols.

Mad Dog’s is a fascinating story about the city’s gritty past, its punk history, and his one-of-a-kind art.

Every neighbourhood has “that guy”. The kind of crazy looking eccentric you see playing a keyboard with a peg leg or some woman in a cape who sells the most amazing jewelry known to man kind for chump change. In my neighbourhood, Mount Pleasant, just south of Downtown Vancouver, that guy is a bleached-out old punk dude named Mad Dog.

I didn’t know much about Mad Dog when I first saw him around. All I knew was that he rode a old, suped-up motorbike with a side car that held his tiny pug who wore goggles and a black vest. Then Mad Dog came into my work place and noticed my Germs circle tattoo. “You’re a little punk!” he yelled at me. “That band was great.” I was immediately intrigued. Asking around, I found out that Mad Dog was not only an artist who did everything from rebuilding old bikes to revamping baby dolls into Chucky-like sculptures to creating miniature replicas of now-destroyed hotels and clubs in our city, he also used to front one of Vancouver’s early ’80s hardcore punk bands, Slaughter Squad. For a tall can and some smokes, Mad Dog let me come over to his place and listen to his stories of what it was like to be a broke, starving, junkie punk in the days of D.O.A., shooting galleries, soup-kitchen handouts and moneyless freedom. 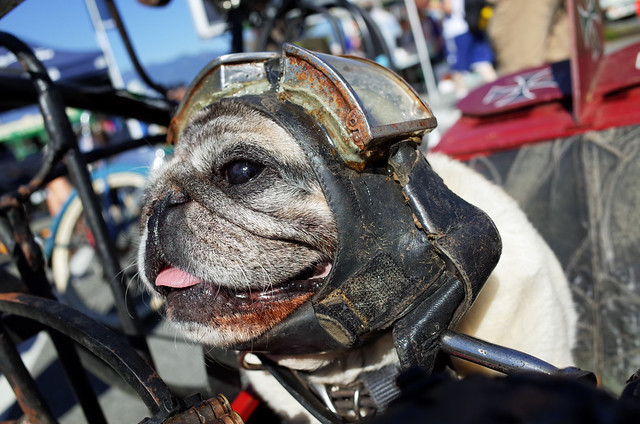 Other Real People of Vancouver that have been featured in these documentaries include Ken Foster, #Streetscript, and Mabel Todd. As for Yoda, we don’t learn too much about this adventurous canine but if you spot him around town, you’ll know a bit more about the person riding the bicycle next to him.

Share51
Tweet1
Share
Pin6
Email
Reddit
WhatsApp
58 Shares
Current Contests on Miss604
*All contests are open to residents of Canada only, unless otherwise stated. Contest timelines are published on each individual post along with entry methods. Some contests may only be open to those 19 years of age and older. Winners are announced on the contest blog posts. Contest policy »
Comments are closed on this post
Advertisement

Also on Miss604.com
« Win Tickets to Yoga on the Ice with the Canucks
Vancouver Fog Photos January 2015 »