John and I recently had the opportunity to get away, thanks to Rogers Communications, and the Palm Desert was calling our name. Resort spas, cocktails, brunch, and shopping were all on our list of things to enjoy but at the very top was a nature walk (or two). The first was Joshua Tree and the second was to the Coachella Valley Preserve and the Thousand Palms Oasis. 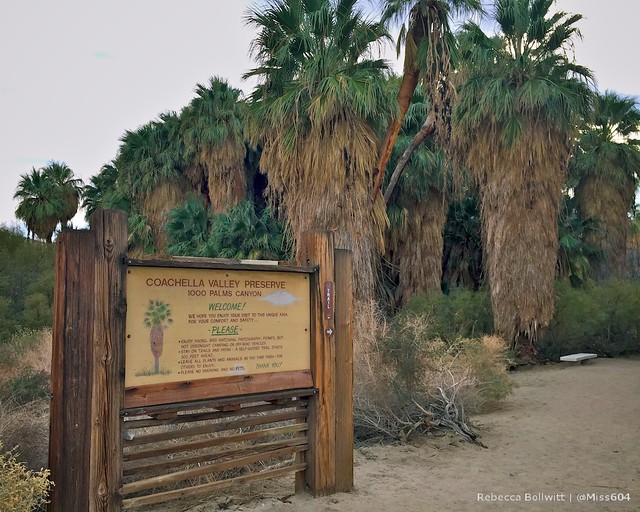 Staying at the Westin Mission Hills Resort, it only took 12 minutes to drive over to the Coachella Valley Preserve, which I found on a list of nature walks in Palm Springs.

Surrounded by dry, rocky valley peaks and pale desert sand, this pocket of wetland was a true desert oasis with lush, towering palms and Desert Pupfish swimming in the Salton Sea tributary fed by underground springs.

From the USGS: “The Coachella Valley Preserve is located on the trace of the San Andreas Fault between the towns of Palm Springs and Indio, California. The main groves of the preserve are called the Thousand Palms Oasis. A visitor center is located in the Paul Wilhelm Grove along Thousand Palms Canyon Road. Springs rising along the Mission Canyon Fault and Banning Fault (parallel strands of the San Andreas Fault System) are the water source for Desert Fan Palms (Washingtonia filifera) (Howard, 1994).

The preserve began with the purchase of 1,920 acres of the proposed site by the California Nature Conservancy. It was expanded with the support of the U.S. Fish and Wildlife Service and the U.S. Bureau of Land Management. The preserve now encompasses 17,000 acres, protecting three separate desert dune fields and six palm forests (over 1,500 palms). It is part of a 20,000 acres dedicated to protect the habitat of the Coachella Valley Fringe-toed Lizard and other species. The preserve covers a large portion of the Indio Hills in the valley west of Joshua Tree National Park (Coachella Valley Preserve, 2009).”

We pulled up and parked, passing a park map and donation box along a sandy path before reaching a small visitor centre filled with pioneer artifacts and old photographs. We set out along the McCallum Trail boardwalk first, ducking under palm branches then following another loose sand path to the visitor centre. 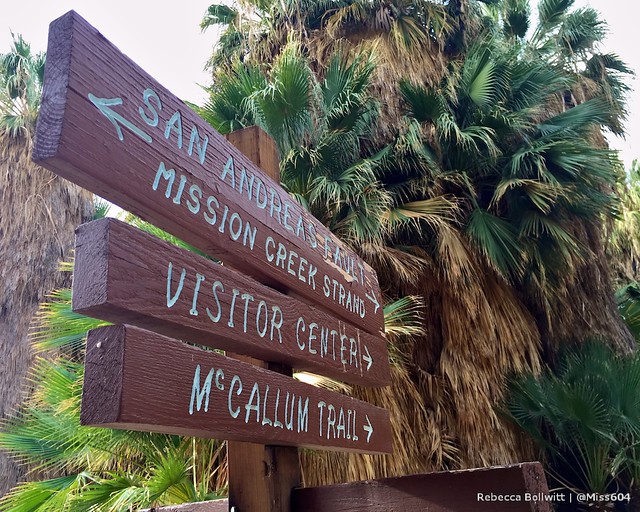 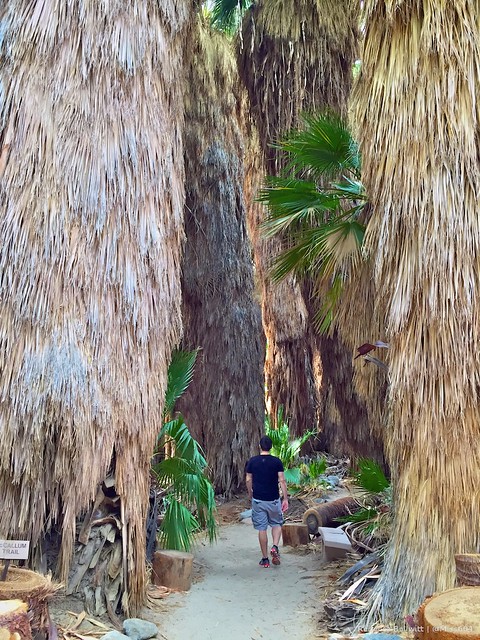 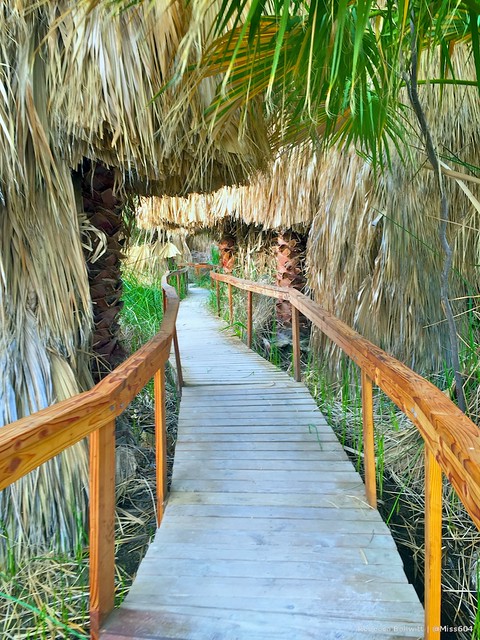 We looped back around as we both wanted to get above the oasis, having previously spotted some hikers on a ridge as we drove in. 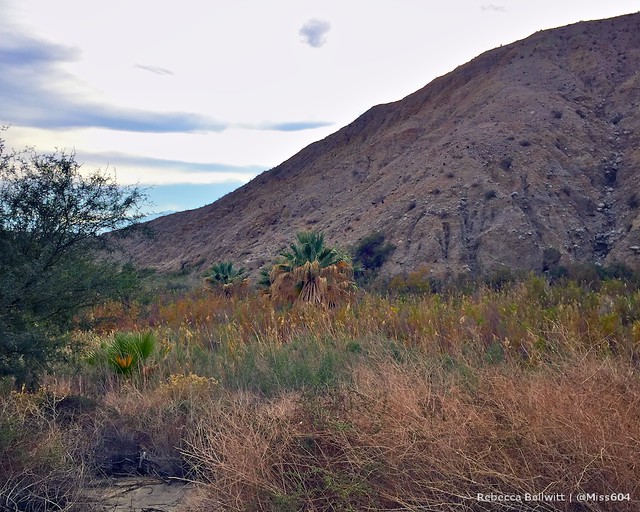 Curious about the geology of the West Coast, particularly when it comes to earthquakes, we both wanted to pinpoint the location of the San Andreas Fault. This continental transform fault extends roughly 810 miles (1,300 km) through California and forms the tectonic boundary between the Pacific Plate and the North American Plate.

We found a winding path on a mound that rose above the oasis on the south end of the park and made our way up to where we could spot the highway on which we drove in, surrounding mountains, and a lovely early sunset. 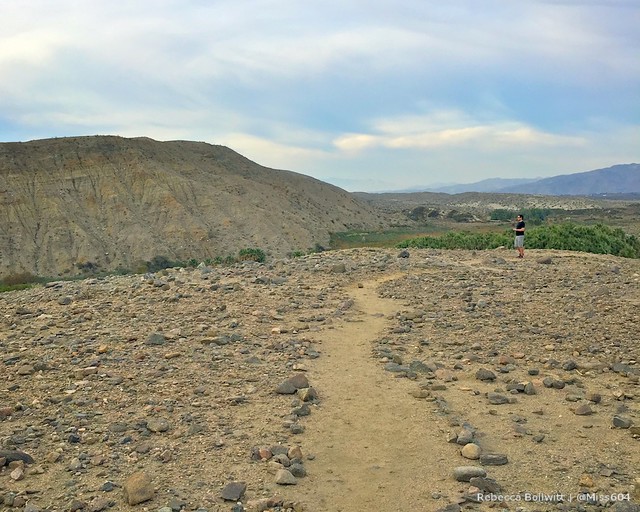 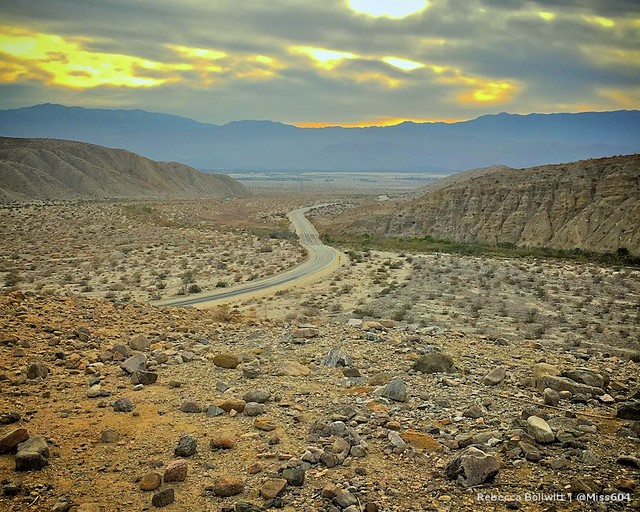 I called up an interactive Google Map of the San Andreas Fault on my phone and our blue location beacon overlapped with the red line of the fault. We were standing directly along the fault line. 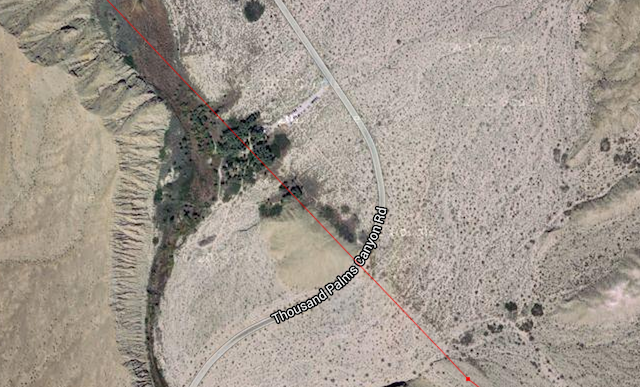 Living in Vancouver I’m constantly in awe of our coastal rainforests, islands and ocean shores and it was so interesting to explore a totally different and unique geographic and geological area. The walk along the McCallum Trail was about 30 minutes there and back with a mix of boardwalks and soft paths in the desert gravel.

The hike up the mound, where we stood atop the lookout, was very steep but there were small children who managed to get up and down right before us. Always check the weather when hiking in Palm Springs (it could be scorching or very breezy in the winter) and bring water with you all the time.

On the way out we also dropped a few bills in the donation box as there was no park fee and we felt we definitely got a lot of value out of this true oasis.

Share
Tweet1
Share
Pin5
Email
Reddit
WhatsApp
6 Shares
Current Contests on Miss604
*All contests are open to residents of Canada only, unless otherwise stated. Contest timelines are published on each individual post along with entry methods. Some contests may only be open to those 19 years of age and older. Winners are announced on the contest blog posts. Contest policy »

Also on Miss604.com
« Robert Burns Statue in Stanley Park
Things to do in Vancouver This Weekend »