The pair play a couple that has been married for 30 years and who recently moved from their comfortable family home in a wealthy suburb into a modern condo in bustling downtown Toronto. There they make a conscious effort to keep relevant, and begin again.

Davina soon finds that all their efforts do nothing to address the emptiness she feels inside while Al happily embraces the change; he has always followed Davina’s lead. Her questionable choices lead her to a better understanding of who she is at this point in her life, but at the cost of the one thing that was keeping her sane: her marriage.

HBO Canada subscribers get to watch all six episodes consecutively when the “binge watch” worthy series premieres on Sunday. I had the chance to catch up with Kim and Don in Vancouver this week to find out a bit more about this passion project:

Sensitive Skin is based on a British series of the same name and Kim first met BBC 2’s head of comedy, Jon Plowman (Absolutely Fabulous, The Office) while she was doing a play (David Mamet’s The Cryptogram) in London’s West End. The initial meeting was to discuss doing a series and he then put her in touch with Hugo Blick, who produced Sensitive Skin in the UK.

“I watched all six episodes, it was my first binge experience and I loved it,” Kim told me while we all sat around a table in MARKET by Jean-Georges at the Shangri-La on Alberni Street. She shopped the series around, got it in development at HBO in America, but it wasn’t until she met Don McKellar, who also directs all six episodes, that the series began to take shape in Canada.

“I felt so instinctually from the very beginning that [Don] and I would work well together.” ~ Kim Cattrall

“We met and a friend suggested we take it to Rhombus where Don has worked exclusively. We talked about how Don would be fantastic as Al, to play my husband, and I also thought they he would really make a great director.” The pair then brought on Bob Martin as a collaborator who adapted all of the scripts, and also has a role in the series. “We were like the three Musketeers working together,” said Kim as Don added, “And that was it, we were off!”

The series began shooting in Toronto last fall and as it wasn’t shot in sequence, it gave cast and crew the feeling of working on a feature film, which to Kim makes this Sunday feel like their opening weekend.

As for HBO Canada releasing all of the episodes at once Don said it will be a very different television experience. “Normally when you do a TV series and you start airing it, it takes a long time to get any response from people. We’re going to have people who have seen them all and who will talk about the ending by Monday.”

Both enjoyed working on the series and described the passion of all involved, especially since they were working with a shoestring budget. “It was great because we had control, and people wanted to do it, and people had their input,” said Don. 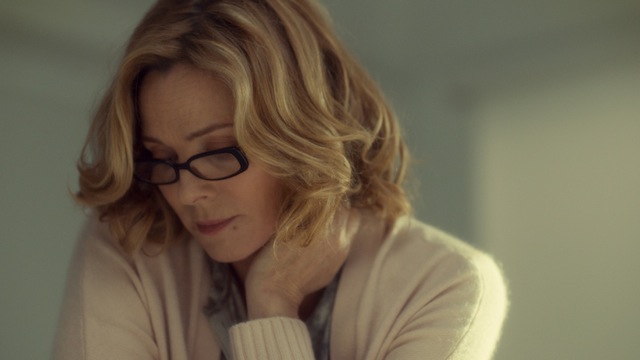 “It’s very funny, and it’s very clever, and I think the writing and the adapting is brilliantly done. Don took from the original show and just opened it up.”
~ Kim Cattrall

Although the show is set and filmed in Toronto, the same geographical issues can be applied to anywhere, especially Vancouver, and the underlying theme of making changes in life and growing older are universal. Whatever the audience’s takeaways might be, Kim said that first and foremost she wants you to be entertained.

“What I found as an actor to be really gratifying is to find aspects of myself and what I’m dealing with and really incorporate them in a very personal, in some ways – I didn’t realize this at the time but – profound ways for me. Those scenes where she’s examining herself are very personal moments, private moments. It was great to exercise those through my work in that way.”

Follow Sensitive Skin and HBO Canada on Twitter for the latest updates and to share your thoughts when you hunker down for a marathon screening session this weekend. Tune into HBO Canada or you can also watch via TMN GO, Shaw Go Movie Central app, Bell TV app, Telus Optik on the go, and on demand platforms.

Share36
Tweet
Share3
Pin
Email
Reddit
WhatsApp
39 Shares
Current Contests on Miss604
*All contests are open to residents of Canada only, unless otherwise stated. Contest timelines are published on each individual post along with entry methods. Some contests may only be open to those 19 years of age and older. Winners are announced on the contest blog posts. Contest policy »