Surrey’s Central City area is growing every day, providing a balance of work, life, and activities within a solid downtown core. You have access to transit, shopping, education, recreation and now a skyline showcasing modern design even the largest urban centres would be proud to showcase. The upcoming WYND high-rise, within walking distance of Central City, will offer the most three bedroom homes in the area along with leading edge architecture and extra large, curving balconies.

WYND offers a fresh take on modern design with its curving 28-storey tower now under construction in the growing metropolis of Central City. The new high rise is offering the most three bedroom homes in the area and WYND also features balconies up to four times the size of the standard Metro Vancouver condo, increasing the living space but not the purchase price. 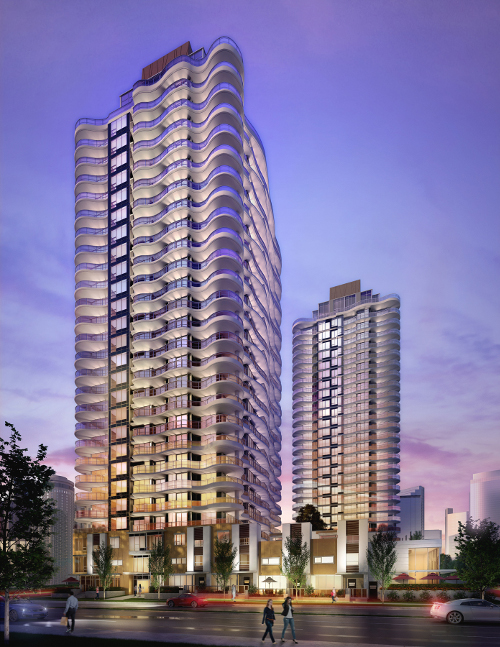 WYND’s highly efficient design including a sliding wall system that allows residents to transform their homes, giving homeowners the room and rooms they need. The sequel to Rize Alliance’s first Central City tower, Wave, WYND reflects the best of Wave, and responds to buyer’s feedback to increase the number efficient 2 bedroom plus den floor plans that allows two full bedrooms plus an extra room that’s ideal for an office or kid’s playroom.

Having been an apartment dweller for the last decade, I love the concept of extra large balconies, sweeping views (the views of the mountains from Surrey are fantastic), urban garden space, and even the pet wash area (well, if I had a pet). Not to mention this is also located very close to where I grew up so the area has a special place in my heart. I’m glad to see so much life breathed into this region.

To promote WYND’s incredible design and spacious living options, I have a Central City prize package to give away (valued at over $300) that includes the following items that will all come in handy in this neighbourhood:

Here is how you can enter to win:

I will draw one winner at random from all entries at 5:00pm on Sunday, June 29, 2014. Follow Rize on Twitter and Facebook for more information about WYND and their other developments in Metro Vancouver.

Share22
Tweet
Share
Pin1
Email
Reddit
WhatsApp
23 Shares
Current Contests on Miss604
*All contests are open to residents of Canada only, unless otherwise stated. Contest timelines are published on each individual post along with entry methods. Some contests may only be open to those 19 years of age and older. Winners are announced on the contest blog posts. Contest policy »

Also on Miss604.com
« Chefs Across the Water June 2014 Recap and Photos
Vote Now in the Best of Vancouver »