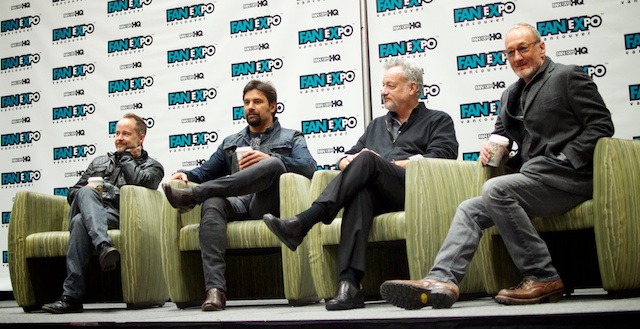 As throngs of cosplayers, fans, enthusiasts, and families filed lined up outside the Vancouver Convention Centre this morning I had the privilege to interview Billy Boyd ahead of the second action-packed day of Fan Expo Vancouver. Billy is well-known for his character Peregrin “Pippin” Took in the Lord of the Rings series, making him a big draw at fan expos and conventions. 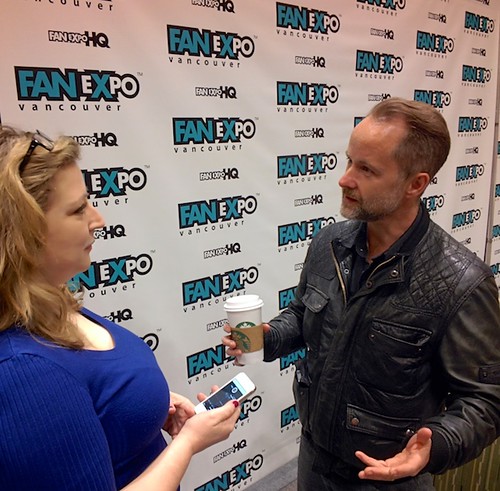 With only a few days in town, Billy managed to meet up with friends who live here and he also made it up to Grouse Mountain yesterday, before the skies clouded over. “The only thing I’ve worried about, because I’m going to stay for a few days, is that it’s going to rain like from now until I think the end of time.” We laughed and I assured him that it would probably only rain straight through to June now. “I left Glasgow for that, you know. It seems to rain more here than Glasgow!”

By next week he’ll be off to Calgary for another event and with his family in tow, he’s making this trip a Canadian adventure for them all. “The last time I was in Calgary I jumped off a mountain.” I asked if it was on purpose and Billy assured me it’s something he would never normally do, but it was for a TV show.

“If there’s one way of getting you to do something you don’t want to do it’s to put a camera on it, because then you’re like ‘God it’s going to be there forever’. Like if I was just there with no cameras I wouldn’t have done it.” Billy was a guest for an episode of Jack Osbourne: Adrenaline Junkie (Series 5, Episode 5, 2009) where they really did climb and jump off a mountain in the Rockies, although he says the jump experience was just awful.

“Everyone who I work with, who I meet in Canada, they either live in Vancouver or they love Vancouver.”

On top of portraying a memorable Hobbit, and his roles as Barret Bonden in Master and Commander: The Far Side of the World, and Glen in Seed of Chucky, Billy Boyd is also the lead singer of the Glasgow-based band Beecake. They’ve been awarded VisitScotland’s award for Best Live Act at the Tartan Clef Music Awards and released an EP, “Please Stay” in June of 2012.

“I was just working last night on a new song because we’re going a new album.” Preparing at first for another EP, Beecake will be putting out a full album since Billy says they have just enough songs. “We are getting really excited about it, I think it’s going to be our best album. We’ve got a new drummer so that’s put a new kind of energy into the band and he’s very keen to tour.”

“Yeah it’s totally different, you’re right, because as an actor – there’s something quite exciting about arriving in a town that you’ve never been and you’re just yourself. I like to go out and just walk and then you find a place, like I found a little oyster bar last night.”

“But, it’s even more exciting when you’re there with friends and then you know you get to share that experience rather than it just being you. There’s some fun about just being you but it’s definitely more fun when it’s with friends. Most of the guys in the band I’ve been friends with since school so we know each other pretty well so it’s not like it’s hard work.”

You can catch Billy Boyd at Fan Expo Vancouver today and tomorrow before he heads to Calgary Expo April 24-27. Fan Expo is open today until 7:00pm and Sunday, April 20th from 10:00am to 5:00pm at the Vancouver Convention Centre. You can still book your autographs and photo ops with Billy Boyd either online or on site.

Share14
Tweet
Share
Pin
Email
Reddit
WhatsApp
14 Shares
Current Contests on Miss604
*All contests are open to residents of Canada only, unless otherwise stated. Contest timelines are published on each individual post along with entry methods. Some contests may only be open to those 19 years of age and older. Winners are announced on the contest blog posts. Contest policy »
Comments are closed on this post
Advertisement