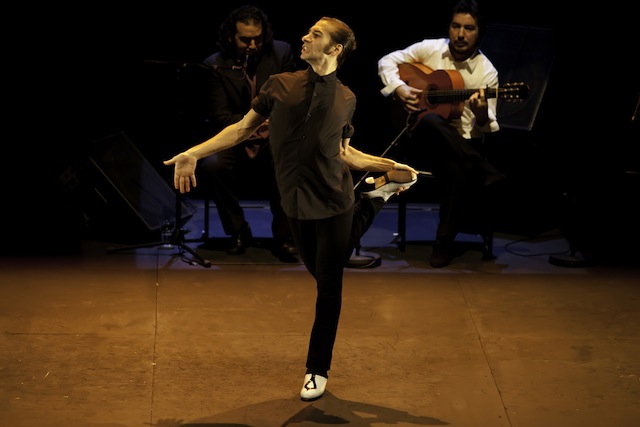 To share the creative, inspiring, and colourful experience of the Vancouver International Dance Festival with my readers, I have a pair of tickets to give away for La Edad de Oro (The Golden Age) where cutting edge Flamenco Master Israel Galván will make his Vancouver debut.

Bringing both great subtlety and explosive rhythmic movement to his work, the Seville-born artist is renowned for expressions that honour flamenco’s long lineage and history, while smashing stereotypes and preconceptions common to the form.

Hailing from Seville, Spain, Galván has dedicated a lifetime to exploring and sharing the percussive, passionate form that is flamenco, beginning under the tutelage of his parents, dancers José Galvan and Eugenia de los Reyes.

In Vancouver, he partners with cantor David Lagos and guitarist Alfredo Lagos in La Edad de Oro – a poised, kinetic exploration of the form. The work’s title translates to ‘The Golden Age’ and refers to a period beginning in the late 1800s and running until the 1930s. Historians of the form generally hold that this era represented a peak for flamenco, and that – apart from exceptional cases – no artist today could match the quality, purity, and creativity of practitioners from that age.

In La Edad de Oro, Galván approaches this sentiment in two ways: first, as a gauntlet to be picked up. Second, as an invitation to explore these popular conceptions; applying his unique, contemporary aesthetic to the very roots of flamenco and dancing the ‘golden age’ as though it were a new era.

I will draw one winner at random from all entries at 5:00pm on Friday, March 14, 2014. Follow the Vancouver International Dance Festival on Twitter and Facebook for more information about events and shows this month.

Update The winner is Grace!