The Vancouver Heritage Foundation has posted on their Facebook page that The Dorothies are getting ready to be moved to a new location. “Ever seen two mirror image heritage homes on stilts? The move is scheduled for March 10th 17th, where the homes will be relocated to a larger lot, restored and become central to a new infill project.” 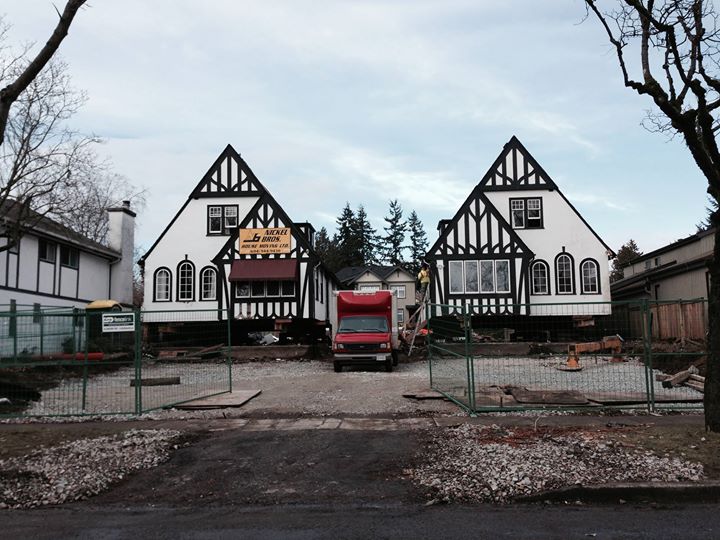 The Dorothies. Photo via The Vancouver Heritage Foundation on Facebook.

The homes, which currently sit at 2827 and 2837 West 43rd Avenue, were built in 1931 and they earned their unusual names because the original owners both had wives named Dorothy.

Back in 2013 the Huffington Post BC reported (via The Globe and Mail): “Their Tudor-style design is nearly identical, with French pane windows, pitched roofs and a driveway separating them that leads to matching garages out back. The homes were last sold for just over $2 million each, and the owner, Trasolini Chetner Corporation, has applied for a permit to knock them down and rebuild. The house at 2827 is currently awaiting approval, while a notice has gone around to neighbours about the redevelopment of 2837.

An effort was made to pick the houses up off their foundation and move them to Vancouver Island with the owner’s support, but the logistics proved too complicated and the $220,000 cost too expensive.”

In December it was announced that The Dorothies would be saved, thanks to residential developer Rob Chetner with the help of architect Timothy Ankenman. The Globe and Mail said: “[Chetnet] and Mr. Ankenman went searching for a nearby Kerrisdale property to relocate the houses to, and found it a couple of blocks away, on W. 41st Avenue.”

The plan needed to pass public consultation, which it eventually did. The idea is to preserve the houses and restore them inside and out, with their basements converted into garden suites and four coach houses built to the rear of the new location, totalling eight suites.

Also on Miss604.com
« Vancouver Art Gallery Family Fuse Weekend
Things to do in Vancouver This Weekend »