The new Surrey City Hall is open for business, 10.8km north of its previous location and now in the heart of Downtown Surrey. To put that into perspective, it would be like moving from South West Marine Drive up to Canada Place in Vancouver. The new Surrey City Hall has plenty of bells and whistles, including the new City Hall Plaza area around Surrey Central, a theatre/performing arts venue, meeting rooms, public daycare, public art, and more. 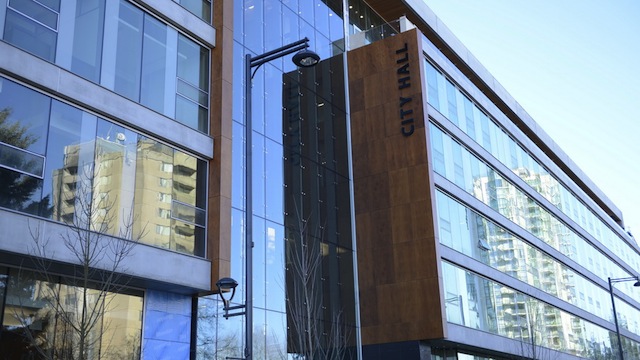 The Surrey Leader has given us a first look at the $97-million LEED GOLD certified building on 104th Avenue and University Drive (formerly West Whalley Ring Road):

Black marble walls reach up eight metres inside the foyer of Surrey’s new city hall, while six storeys of window panes offer a view of a public plaza, the city’s new library and Central City tower. The open atrium, with stone tile floors, spans the full six floors of the building, with a 20-metre-long artwork centerpiece – a metal flock of birds – flying toward the large window.

A wide staircase on the north side ascends, and at each landing, serves as a bridge between the east and west sides of the building. On Thursday, workers were still scrambling to put the finishing touches on the structure, sanding down surfaces, covering exposed wire, and screwing banisters into stairwells.

Much of the back areas of the hall are constructed as one would expect, with typical hub-style workstations separated by thick white dividers. The outermost offices, for managers and city councillors, have floor-to-ceiling windows and gracious views.

The councillors’ offices are located on the fifth level. The mayor’s office, with adjoining balcony facing south, is on the top floor, which was closed during The Leader’s visit on Thursday.

The new 180,000-sq.-ft. building is touted as being more than just a city hall, with its council chambers also serving as a performing arts venue and meeting place. [Source: Surrey Leader]

Surrey Place Mall, Whalley, and the Ring Roads are terms on the brink of extinction. I was born and raised in Surrey, grew up in Whalley, and attended West Whalley Junior High. I would have never thought that this area would build up as much as it has, starting with the renovation of Central City Shopping Centre at the turn of the century and looking ahead to dozens of new towers including the 52-storey Marriott at 3 Civic Plaza.

Surrey is a work in progress and you can’t deny that Vancouver is also ever-changing. A new crane, a fresh excavation, a road dug up here, another public hearing. When I visit family or attend a free cultural or music festival in Surrey I don’t find myself longing for the ‘old days’ and missing what is now gone or replaced. My hometown is growing, moving forward, and I’m looking forward to seeing how it shapes itself over the next decade.

Council meetings will begin at the new facility on March 31st, once all the audio-video work is complete. The official City Hall Grand Opening for the community will be held on Saturday April 26, 2014 in conjunction with the city’s Party for the Planet festival.