Over the next few days I will be profiling a handful of gadgets and tech gifts. Some will be a part of a general gift guide and others will include giveaways. They are all items that I have used (the giveaways will be brand new, just for the winners of course) and that I find useful.

I love my smartphone and all of the useful apps that I talk about when I get invited to join Dotto Tech‘s radio show however at this time of year the battery just drains at an expedited pace. Being on the go, checking email, taking photos of festive sights, running apps for shopping, parking, and productivity all mean that my battery isn’t going to last very long after it charges overnight. 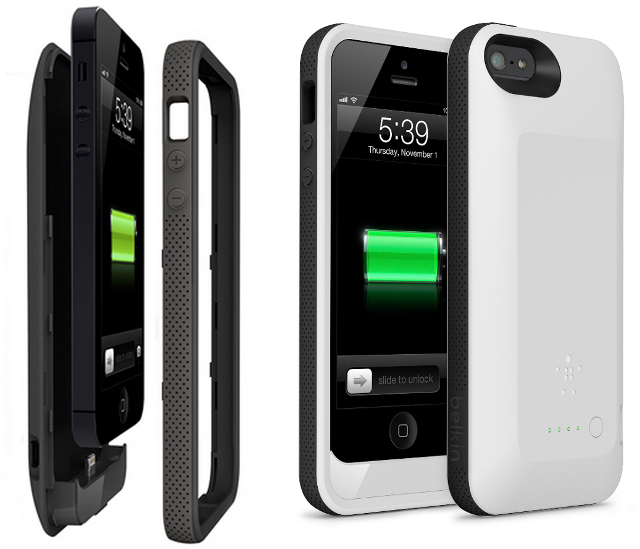 Fortunately the Belkin Grip Power Battery Case can keep you going, doubling battery life by providing a full, additional charge on the go.

The Grip Power Battery Case’s rechargeable 2000 mAh battery capacity means you can talk, text and browse the web twice as long on one charge than with your phone alone. It’s easy to use — just press and hold the power switch to turn the battery power on and off, and press it once to see the battery’s status.

I have been using a similar battery case from another manufacturer and two things it does not have, that the Belkin does, is headphone compatibility and the shock-resistant bumper with secure-hold grip.

Other features of the Belkin Grip Power Battery Case (for iPhone 5 and iPhone 5s):

If you would like to win a Belkin Grip Power Battery Case, here’s how you can enter the draw:

I will draw one winner at random from all entries at 12:00pm on Tuesday, December 17, 2013. Follow Belkin on Twitter and Facebook for more gadget gift ideas. The Belkin Grip Power Battery Case is for the iPhone 5 and iPhone 5s only and the prize is the white model.

Update The winner is Emilia!

Also on Miss604.com
« Things to do in Vancouver This Weekend
VanDusen Festival of Lights »