This post has been contributed by Rebecca Eames, Fundraising and Communications Specialist with the Stanley Park Ecology Society (“SPES”). I have been following SPES since I moved into the West End almost eight years ago and I recently became a member. I wanted to offer the team an opportunity to share their news, events, and work so I have created “SPES Saturday” where they will be contributing stories with my audience once a month.

Halloween is fast approaching and everyone is suddenly talking about mummies, ghouls, witches and werewolves! But here in Stanley Park we’re pretty excited to have some real creepy creatures! Does Stanley Park have wolves? Nope. No wolves here, let alone werewolves! But there’s no shortage of creepy crawlies like sinister spiders and slimy slugs. And maybe, just maybe, as you enjoy that evening stroll through the park you might feel the watchful eyes of an owl spying on you from deep within the forest.

Listed below are SPES’s Top 4 Creepy Creatures. We even rated them between 1 and 5 in terms of their scare factor (1 being knee-trembling and 5 being utterly blood-curdling). Look out for them next time you visit to the Park! The Wolf Spider (araneae lycosida), can reach up to 33mm in body length, some species can reach up to 5 cm. This may be small as far as arachnids go, but they are incredible predators. Larger females have been known to prey on small mammals like amphibians or reptiles. Unlike many other spiders that spin webs, these animals are known for burying themselves in a small hole (or burrow) and waiting for prey to walk by. If a prey item doesn’t conveniently pass by, they are not averse to running after their food as they are incredibly fast and can usually chase down any meal. So, watch your step when walking through the park. You never know what might be dwelling in a small burrowing hole!
Scare Factor = 3.5

There are lots of different species of bats that could swoop past you on a walk through Stanley Park. The little brown bat (myotis lucifugus), Yuma bat (myotis yumanensis), and the big brown bat (eptesicus fuscus) all call the Park home. They have wings made of a skin membrane and they rely on echolocation for finding their food at night. Contrary to popular myth, bats are not blind: their vision is very good. These nocturnal mammals spend the majority of the day roosting in places such as caves, cracks in rocks, under tree bark or in trees cavities.
Scare Factor = 4.5 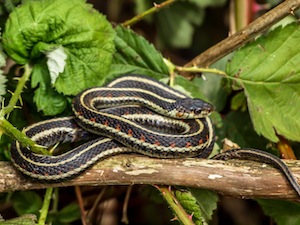 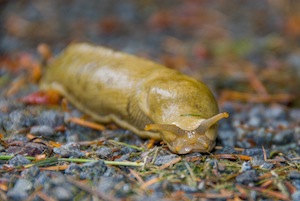 There’s no slimier creature than the Banana Slug (arionidae arilomax), the only native slug in British Columbia. This animal gets its name from its brownish-yellow colour and more often than not, it looks like an over ripe banana. But don’t let their colouration fool you; you don’t want to put this slimy critter in your mouth. The slime covering its skin will numb taste buds in an effort to dissuade predators from making a meal out of it.
Scare Factor = 4

To find out more about these and other spooky creatures, join Stanley Park Ecology Society (SPES) for, a theatrical 30-minute lantern-lit journey through the forest. Your guide will help you find some of Stanley Park’s most elusive nocturnal animals and uncover the truth behind a mysterious animal disappearance. This event is run in conjunction with the Ghost Train and leaves from the Stanley Park Miniature Railway area.

Also on Miss604.com
« Things to do in Vancouver This Weekend
Hound of the Baskervilles in Surrey »