As a very proud sponsor of the Vancouver International Film Festival I have the honour of sponsoring an individual film as well. This year I have chosen the world premiere of Leap 4 Your Life. This afternoon I caught up with the film’s writer and producer Taylor Hill who also stars in this mockumentary about a dance competition. 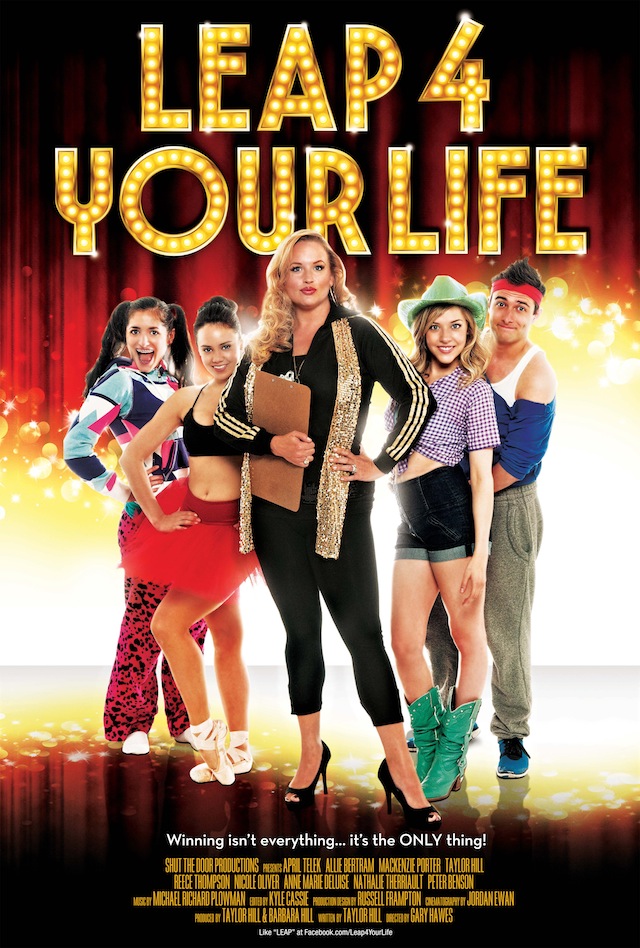 Backstage drama meets reality TV in this juicy mockumentary. April Telek hisses up a storm as Maureen, the leader of a teen dance troupe. She’s a dedicated woman, although she seems to be driven by spite as much as passion. Her team includes Hilary (Allie Bertram), a rich girl who knows how pretty she is and isn’t afraid to flaunt it; Molly (writer Taylor Hill), a flaky eccentric; and Matt (Reece Thompson), the “token guy” on the team. We follow them in the lead-up to a competition, in which Maureen will face rival coach Laine (Jill Morrison), a woman with whom she has more in common than she’d like to admit.

“It’s such a little indie that could. We don’t have a lot of money backing it but we do have a lot of heart and passion so I hope people get that out of it.”

“I used to be a dancer when I was younger and I’ve always been obsessed with Christopher Guest films,” Hill told me. “I’ve always had an obsession with reality TV and I’ve always thought that a dance competition would make a great mockumentary.”

Hill said that it was her mother who initially encouraged her to write. “I was kind of feeling down about not working enough in the acting world, and instead of waiting around for someone else to tell me to be creative, my mom was like ‘just be creative yourself’.” Hill set out to write the original script, inspired by the likes of Christopher Guest, Lena Dunham, and Tina Fey who write, produce, and act – as she has done with Leap 4 Your Life.

Praising her friends and colleagues for helping to make this film a reality, Hill said many volunteered their time and efforts, and they take turns supporting each other’s projects. “You click with people, you want to work with your friends, it just makes it so much more fun.” It’s a reflection of the BC film industry as a whole, with a strong community bond that can shine during events like VIFF. “There’s just so much talent here in BC,” she added. “We just need more avenues to showcase that.”

Tickets are available now through the VIFF box office for screenings on September 30th (world premiere) and October 10th. Check out the official trailer and follow Leap 4 Your Life on Facebook and Twitter to learn more about the film.

Leap 4 Your Life is also a part of the new #MustSeeBC spotlight on British Columbia film at the festival. The campaign invites audiences to preview trailers, promote BC filmmakers across social networks, and vote on the Audience Must See Award.

Share34
Tweet
Share
Pin
Email
Reddit
WhatsApp
34 Shares
Current Contests on Miss604
*All contests are open to residents of Canada only, unless otherwise stated. Contest timelines are published on each individual post along with entry methods. Some contests may only be open to those 19 years of age and older. Winners are announced on the contest blog posts. Contest policy »
Comments are closed on this post
Advertisement