When strolling around the Seawall in downtown Vancouver, Stanley Park or along False Creek, you are bound to see seagulls or herons, perhaps a harbour seal, and most likely a fantastic west coast sunset. Another staple sight on the waterfront is balanced rocks. Stacked high, sometimes with sticks incorporated between layers of stones, these sculptures stay tall until knocked down by incoming waves. 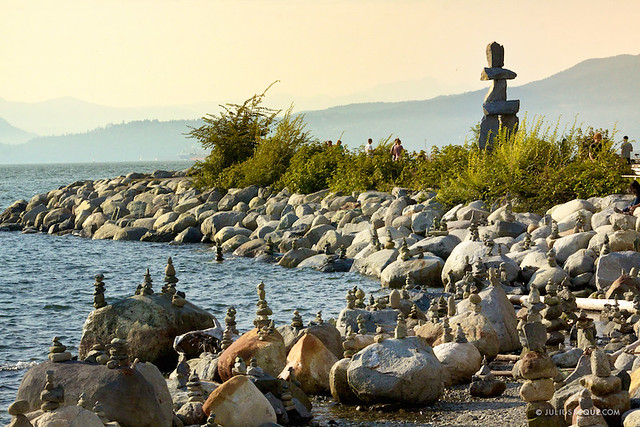 As for who is responsible for these man-made features, I have seen a few names pass by since I started reading about these balanced rocks in 2006. These include Ziggy (who started in False Creek in 2010), Terry Robinson (known as Rock Stacker on Flickr), Jozsef Roth (who balances rocks for charity at Granville Island or English Bay) and Kent Avery. Every now and then passersby will also join in to see how they can contribute.

Some are inspired by Inukshuk and others are just for fun — to see what’s possible and to entertain. In a video feature Kent Avery says: “It’s very soothing because you’re in a slowed down state of mind. You’re concentrating on that, you’re slow, there’s chatter going on in the background sometimes, there’s people yelling ‘Hey what kind of glue do you use’ but you just kind of have to focus that out.” To be clear no glue is used, just gravity. I tried my hand at rock balancing when I was a teenager at summer camp and a few times as an adult, when time has allowed. It takes a while to find the right angles and balance points but if you can calm your mind and steady your hands, you’ll be surprised at what you can stack. The first rock balancing photo I took in 2006. I believe the sculptor was Terry Robinson.

I can’t imagine the focus and concentration that these volunteer, temporary sculpture builders must have. However, I sincerely appreciate the element of wonder they bring to our waterfront landscape. 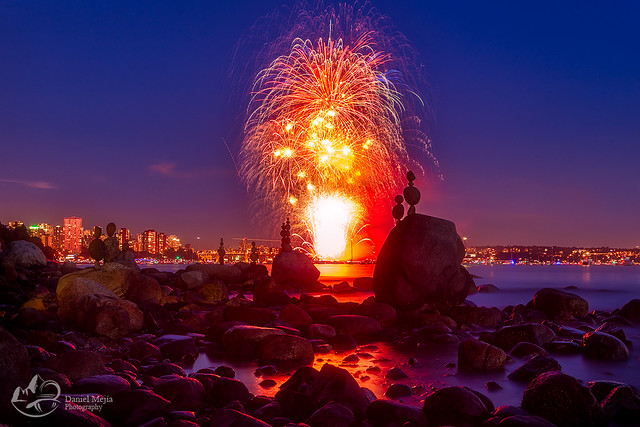 If you know of a rock balancer, or are one yourself, I would love to hear from you in the comments to share your story.

Also on Miss604.com
« Things to Do in Vancouver This Weekend
Andy Dixon: Pleasure Studies »