We’re fortunate enough in Vancouver to have many dietary options available to us in our grocery stores, markets, and restaurants. “Gluten Free” is the latest offering and according to a survey (commissioned by Udi’s Healthy Foods) 4 million Canadians are saying goodbye to gluten, making the movement much more than a passing trend.

17% of British Columbians have also stated they are gluten free or reducing gluten in their diet, which is more than anywhere else in the country. The top reasons for the switch are a gluten intolerance and supporting a family member. On top of that, many people feel happier and more energetic along with reporting improved gastrointestinal health.

There are many ways to reduce your gluten intake and still enjoy delicious meals, that don’t purely consist of kale (but really, kale chips are delicious aren’t they?). Bread is usually the hardest food item to give up and the aforementioned survey found that one in four Canadians who are gluten free or gluten reduced “cheat” with bread. I know from talking to friends who are gluten free that if they do eat something with gluten, provided they do not have a serious allergy that requires medical attention, the after effects are not pretty. So while the temptations are there, it’s best to find alternatives — and you certainly do not need to give up bread entirely.

Udi’s Healthy Foods has offered up a prize pack (valued at $150) for one Miss604 reader that includes a full menu of comfort foods for fall that is entirely gluten free. 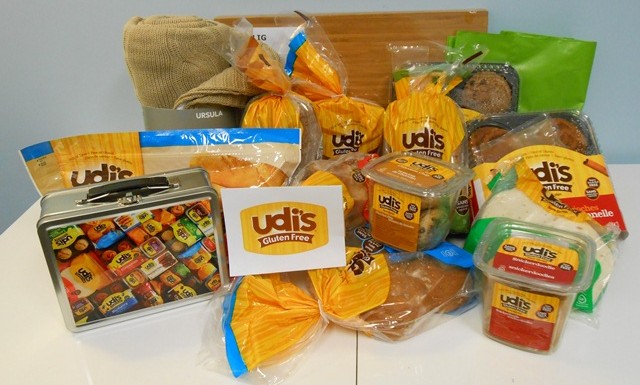 Whether it’s part of your diet already or you would like to give gluten free a try, here’s how you can enter to win this Udi’s prize pack:

I will draw one winner at random from all entries at 12:30pm on Wednesday, October 2, 2013. Follow Udi’s on Twitter and Facebook to find out more about their product line and where it can be purchased around Vancouver.

Update The winner is Janice!

Also on Miss604.com
« Architecture and Design: Film Night at the Hollywood
Things to Do in Vancouver This Weekend »