Earth Day is coming up on Monday, April 22nd and London Drugs is reminding consumers that they host a variety of options for recycling and purchasing eco-friendly goods. Leading by example, more than 74 per cent of the company’s waste is recycled or repurposed, instead of going to landfill. The Olympic Village Store in Vancouver has also achieved a 96% recycling rate. Since the 2008 launch of London Drugs’ educational ‘What’s the Green Deal‘ program and the support from its staff and customers, London Drugs now tallies more than 42 million pounds of materials recycled including: Styrofoam, batteries, computers, televisions, cell phones, paper, plastic, cardboard, and metals.

London Drugs recycles responsibly, shipping TVs, computers, VCRs, printers and other electronics (in BC) to Genesis Recycling. Non-toxic materials are sorted and bundled for sale as commodities for remanufacture. Circuit boards and TV tubes are sent to North American smelters such as TECK (in Trail, BC) where they are safely melted down and their precious metals recovered. They’re even getting into recycling candybar wrappers and beauty packaging.

The following items can be recycled at London Drugs locations:

To celebrate the 150+ products on London Drugs shelves that have environmentally-preferable benefits or certifications, they have offered up a prize pack valued at $200 for me to give away to one lucky reader (pictured below). 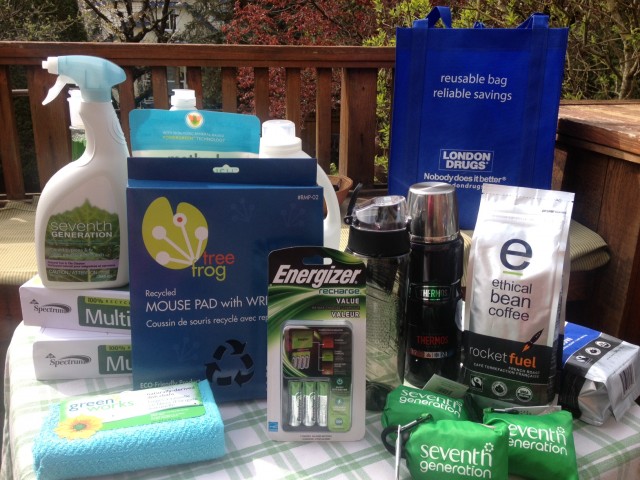 Here’s how you can enter to win this eco-friendly prize pack:

I will draw one winner at random from all entries at 12:00pm on Wednesday, April 24, 2013. Learn more about London Drugs’ green product information by following What’s the Green Deal on Twitter.

Update The winner is Elizabeth B!