The Vancouver International Auto Show is coming up next week so with all of the event notifications I’m receiving this week I have cars on the brain. Therefore in the search for today’s Vancouver history piece, Canada’s first gas station came to mind.

Vancouver was the home of the first service station in the country when Imperial Oil opened up on the corner of Smithe and Cambie in 1907. According to Chuck Davis’ History of Metropolitan Vancouver, the first car to appear in Vancouver was a Stanley Steamer, in 1899. The first gasoline-powered car arrived in 1904.

The opening of the gas station is actually very well-documented as the Founder of the Vancouver Archives, Major J.S. Matthews, worked as an employee of Imperial Oil at the time (he was in his twenties).

“One day, the telephone rang. The call came from the Hastings Sawmill and the speaker asked me if we had any gasoline which could be used in automobiles.

The office boy replied that we had three kinds: One was ‘74’-brand Baume gasoline and was supplied to drug stores, who sold it to ladies for cleaning their gloves; the second kind was deodorized stove gasoline, used in plumber’s firepots for heating soldering irons, and the third kind was benzine, used for dissolving lacquer in the salmon canneries along the Fraser to prevent the salmon cans from rusting.

The office boy went to the warehouse and told the foreman to send a four-gallon can of ’74’ down to John Hendry, manager of the mill.

That can was the first gasoline ever sold in British Columbia for motorcar use.” 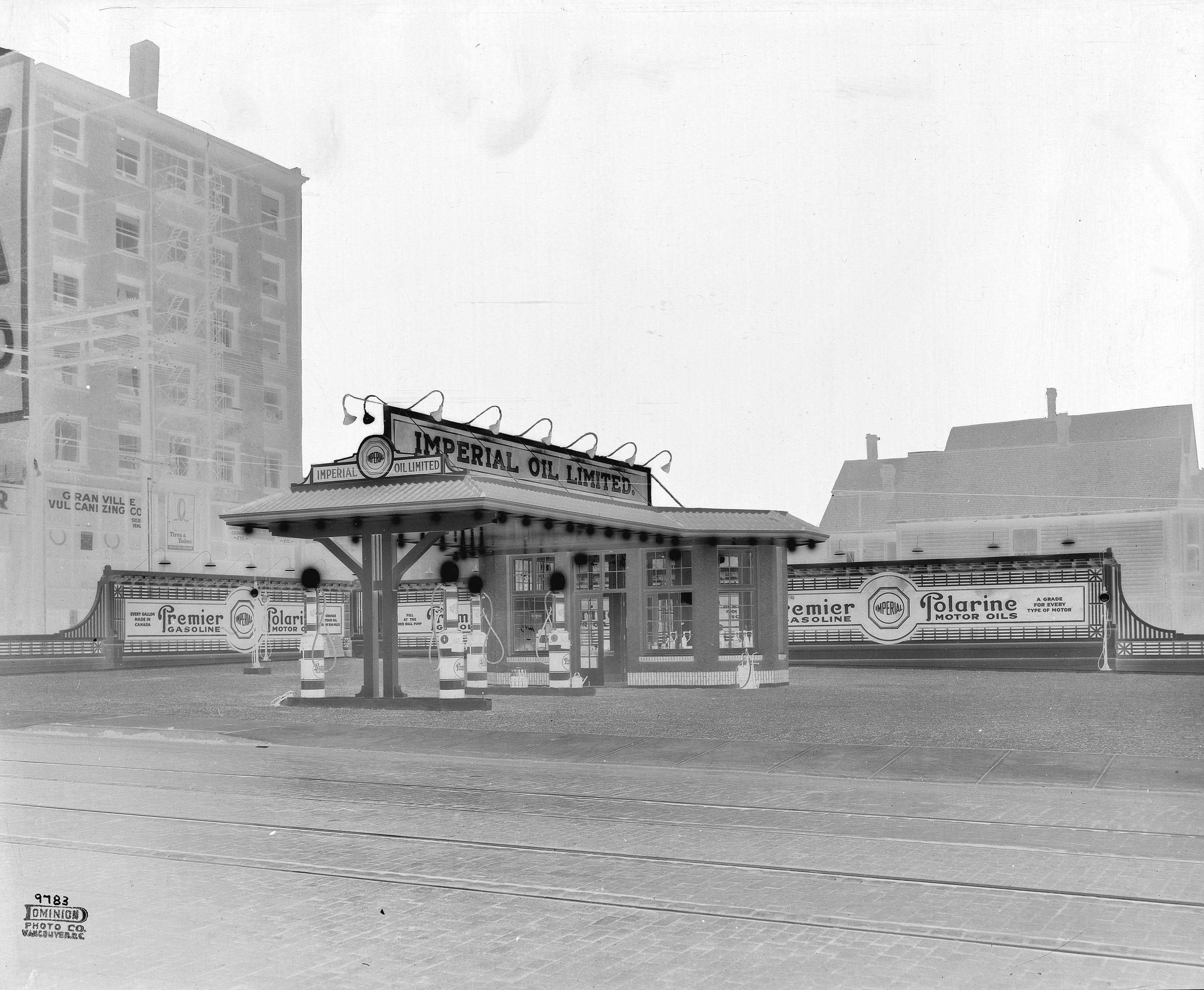 After a while the number of vehicles in Vancouver grew, from a handful to perhaps two hands full, yet the method used to refill their tanks was inefficient and dangerous. “So a 13-gallon (59-litre) kitchen hot-water tank was procured and a length of rubber garden-hose was attached to it.” A night watchman, J.C. Rollston, was the first attendant, they got him a chair (his wife made a cushion for it) and he sat in a corrugated tin shed. The country’s first gas station was established.

“…Ofttimes as I passed and waved good morning, [Rollston] would call out, ‘I’ve been busy this morning!’

‘How many?’ I would call, and he would answer back, ‘Three cars this morning!’ Two local bicycle shops began selling gasoline, which they bought from Imperial for 20 cents a gallon and sold for 40. [Vancouver History]

Chuck Davis writes: “Some have claimed that Imperial’s station was the first in the world. Not by a long shot. There’s no doubt, however, that Vancouver’s first service station was also Canada’s first.”

Share81
Tweet20
Share
Pin47
Email
Reddit
WhatsApp
148 Shares
Current Contests on Miss604
*All contests are open to residents of Canada only, unless otherwise stated. Contest timelines are published on each individual post along with entry methods. Some contests may only be open to those 19 years of age and older. Winners are announced on the contest blog posts. Contest policy »
Comments are closed on this post
Advertisement