Racing across my Twitter streams this afternoon was the news that the Waldorf Hotel in East Vancouver was closing its doors and soon a link to the official press release appeared:

Rest In Peace @waldorfhotel. Thank you for an amazing 3 years as an arts and culture hub in our city ow.ly/gGdZU

The Waldorf closing is a big loss to our growing creative community, they built a great culture hub 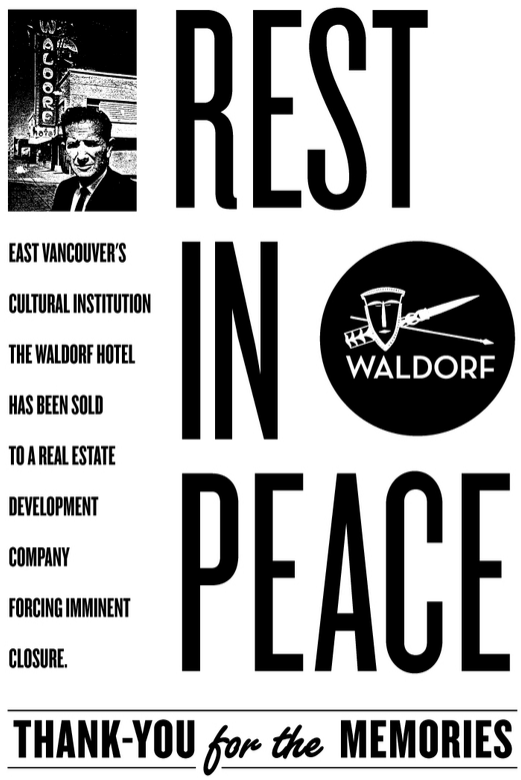 …In early January 2013, Anselmi and Gomez were informed that the complex had been sold to the Solterra Group of Companies, a condominium developer. “Solterra were unwilling to sit down and discuss negotiating long-term lease possibilities. We were offered a week-to-week lease until September 2013, when the property must be delivered vacant. We obviously can’t move forward under these conditions as our business requires commitments to artists, organizations and entertainers months in advance,” Anselmi explains. He then adds: “This has cost 60 people their jobs. This has destroyed our business.

…”The irony that the Waldorf was taken over by a condo developer in the very area we helped reinvigorate is obvious to anyone. The Waldorf filled a void. People responded because they needed it. We tried to stand for something authentic and real in a city with thousands of empty condominiums and a community starved for cultural spaces,” says Anselmi. [Read the full press release online] Back in 2010 I profiled the re-opening of the hotel due to its historical significance at one time being one of North America’s top tiki lounges in the 1950s.

According to Heritage Vancouver (who did a search at the time this post was written) the Waldorf and the Waldorf Tiki Bar are not protected or listed on the City’s heritage register. Losing a historic landmark and such a hub for the community will be quite a blow. Perhaps the story is still unfolding and there will be more developments but for now Vancouver is already mourning the Waldorf. The keys will be handed over on January 20th.

Update: Already something coming out of City Hall as Mayor Gregor issued a statement that includes: “The site at 1489 East Hastings is currently zoned for mixed-use commercial purposes, not residential development. Any change in zoning would require extensive neighbourhood consultation and approval by City Council.”

Update: You can sign an online petition to save the Waldorf.

Update: January 10, 2013: I received a press release by email with a statement from Gerry Nichele, CEO of Solterra Group: “It will be a while before we take possession of the property, and right now the Puharich family is still responsible for the ongoing operations of the hotel. We have an open mind about the future of this site and we are studying all the options. I can say that at this point we certainly have no intention of demolishing the Waldorf Hotel. We want to work with the City to explore possible ways to retain and improve the hotel.”

Update January 13, 2013: There is a Love-In at the Waldorf Hotel TODAY starting at 2:00pm. Food cart festival, press conference, family-friendly.