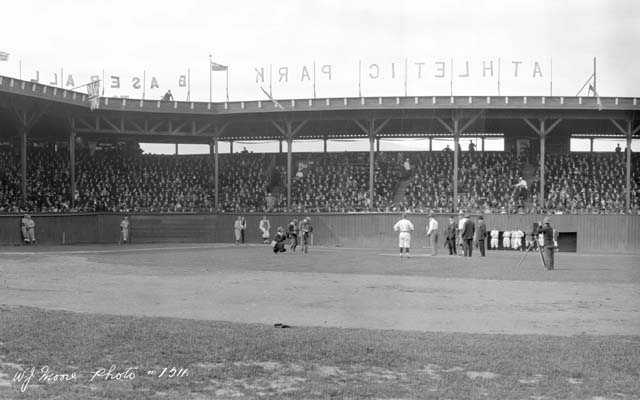 Chuck Davis writes: “The park was built by Bob Brown, who would come to be known as Mr. Baseball here. Brown had purchased the Vancouver Beavers club of the Northwestern League for $500 in 1910. He was the club’s owner, president, manager and shortstop… …The Beavers went on to win the league pennant. Alas, the club disbanded at the end of the 1922 season, and the city went without pro ball for 15 years.” 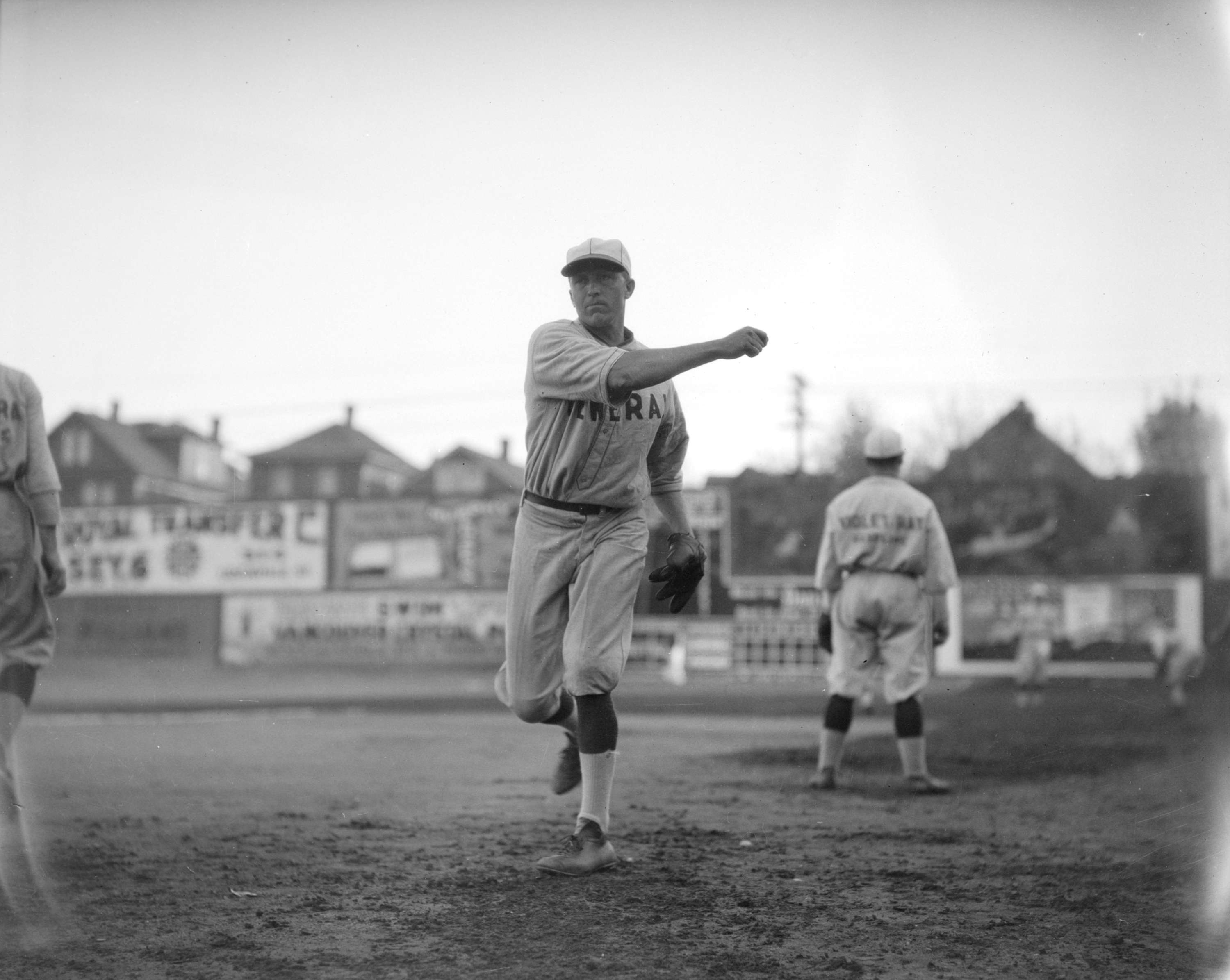 According to an article about Vancouver Baseball History written by Jim Bennie, Athletic Park suffered a fire in 1926 but it survived to host the first night baseball game in Canada (a double-header) on July 3rd, 1931.

Three thousand fans showed up the next day in pelting rain that lasted the whole game, with the field ankle-deep in mud, but the players—the Babe included—stayed, and so did the crowd. Said Lefty O’Doul in the dugout, “Say, this is some baseball town, isn’t it? Back in Portland there weren’t five hundred out and on a bright and sunny day.” Ruth, who had hit 60 home runs for the Yankees a couple of years earlier, told the Sun’s Hal Straight that nobody would ever hit 60 again. [Vancouver History]

Pictures and sounds and people—Lou Gehrig wearing rubber boots and carrying an umbrella in a storm which flooded a major league exhibition at Athletic Park in 1934 … Babe Ruth wallowing to the plate in the mud, turning to 6,000 zealots sitting soddenly in the downpour and shouting, “Well, if you fans can sit in it, we can play in it” … Nat Bailey peddling his hot dogs in a high tenor voice, chanting: “A loaf of bread, a pound of meat, and all the mustard you can eat …” [Vancouver Baseball] 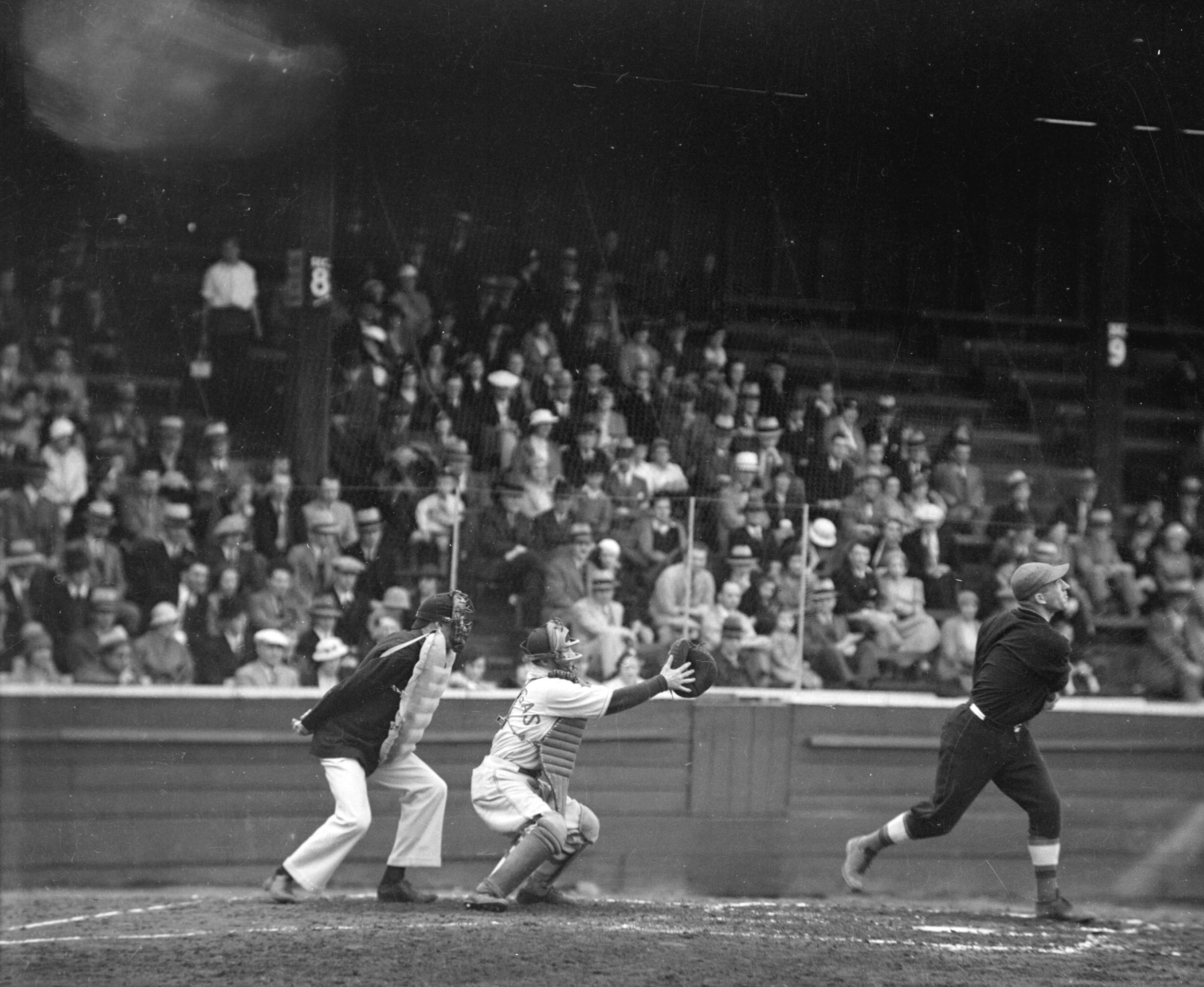 In 1944, Seattle beer magnate Emil Sick bought Athletic Park and renamed it “Capilano Stadium”. The season stopped due to war-time travel restrictions but would pick up again in 1946. A new Capilano Stadium was built (near Queen Elizabeth Park) in 1951 and was then renamed Nat Bailey Stadium in 1978.

If you haven’t done so already, sign up and join me at the Vancouver Canadians Tweetup happening April 28, 2012 when the Toronto Blue Jays take on the Seattle Mariners in MLB action.

Share18
Tweet3
Share2
Pin
Email
Reddit
WhatsApp
23 Shares
Current Contests on Miss604
*All contests are open to residents of Canada only, unless otherwise stated. Contest timelines are published on each individual post along with entry methods. Some contests may only be open to those 19 years of age and older. Winners are announced on the contest blog posts. Contest policy »