My Vancouver Icons series began as a way to showcase photos of buildings, statues, and everyday Vancouver scenes that have a history that most don’t know. However, there are some subjects are captured more than others when I browse the images that have been added to the Miss604 Flickr Pool. One that keeps popping up at least once a week is Douglas Coupland’s Digital Orca, which was installed at Jack Poole Plaza in 2010. 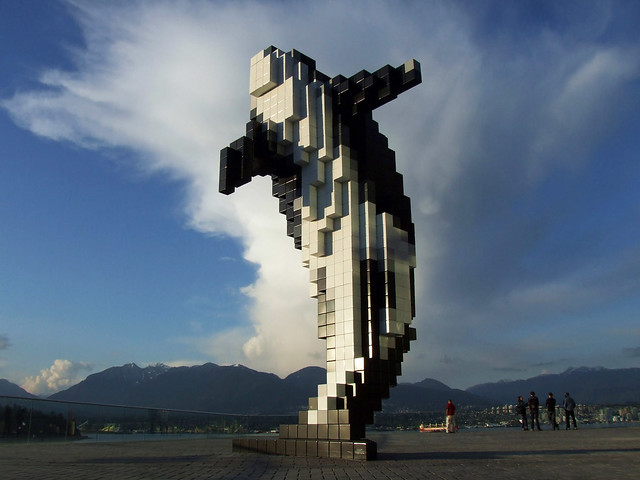 From BC Living: “Douglas Coupland’s first piece of public art in Vancouver, Harbour Spirit Digital Orca, is both beautiful and bizarre, appearing as digital art in the three-dimensional world. Made using a steel armature with aluminum cladding, black and white cubes comprise the orca’s body, “making a familiar symbol of the West Coast become something unexpected and new,” Coupland writes on a plaque near the sculpture. It also touches upon the importance of technology and nature in the province.” 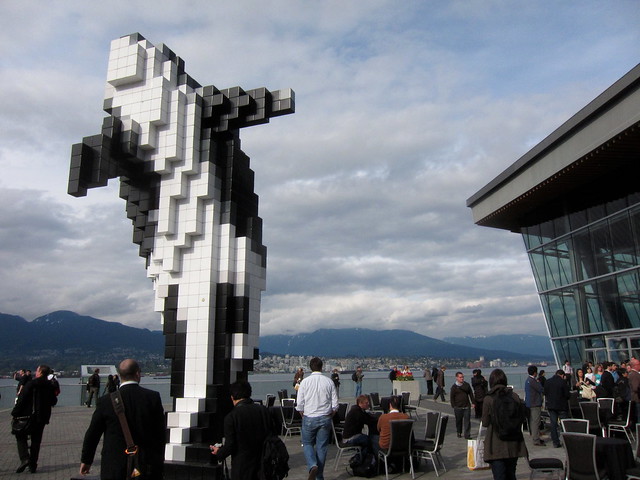 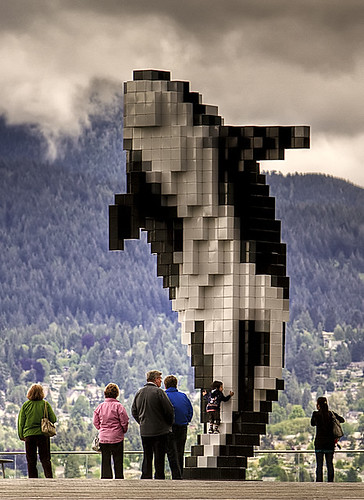 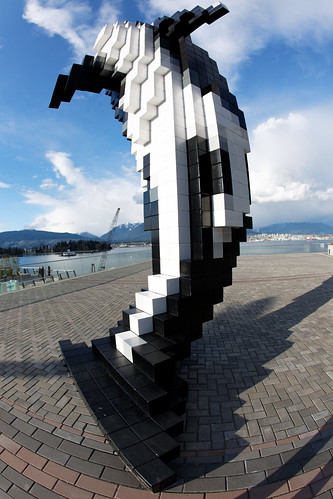 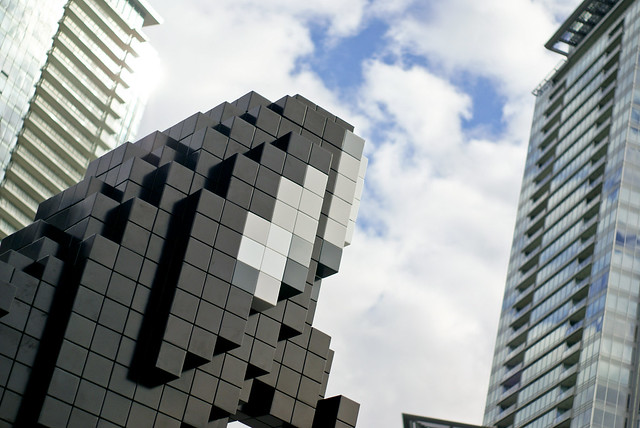 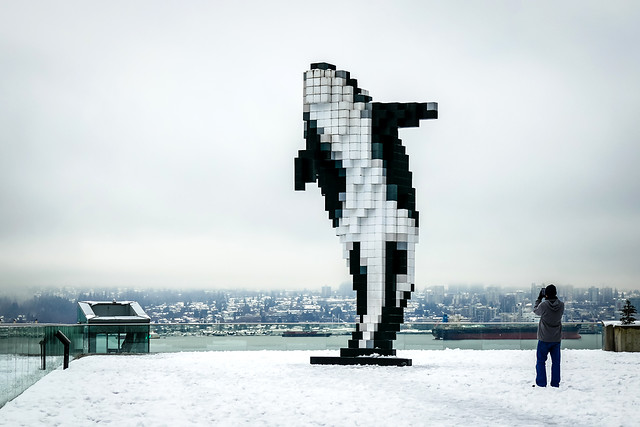 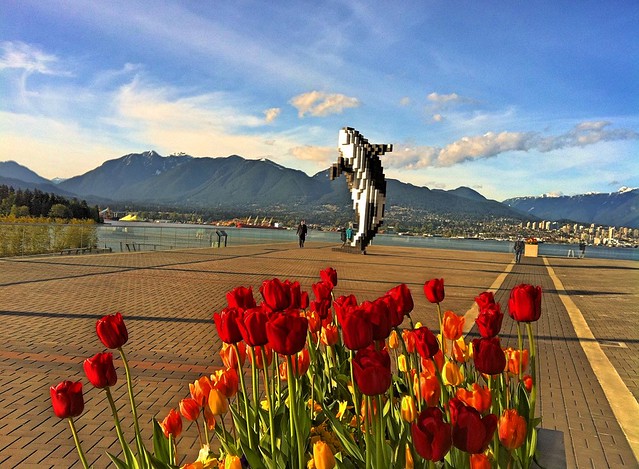 From Vancouver Observer: “One of Vancouver’s most beloved and well known public art pieces is the Digital Orca at the new convention centre. The familiar symbol of the West Coast is represented by 3D cubes, giving the appearance of a 2D object. It’s kind of like looking at a photograph with really bad resolution.”

From Jaunted.com: “Most people call the Digital Orca either “Lego Orca” or “Pixel Whale,” a sure sign that, once again, a Douglas Coupland creation is drawing attention and sparking a reaction. There’s a clear “do not climb” plaque at the foot of the inviting square “steps” that form the whale’s tail, yet invariably people climb it to pose for pictures. It’s just too much like a fun, gigantic toy!” 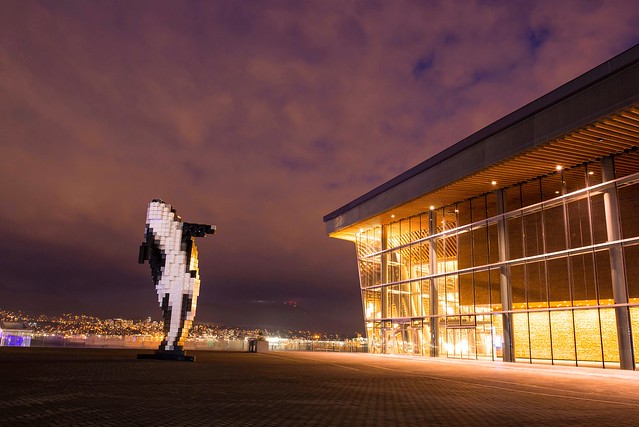 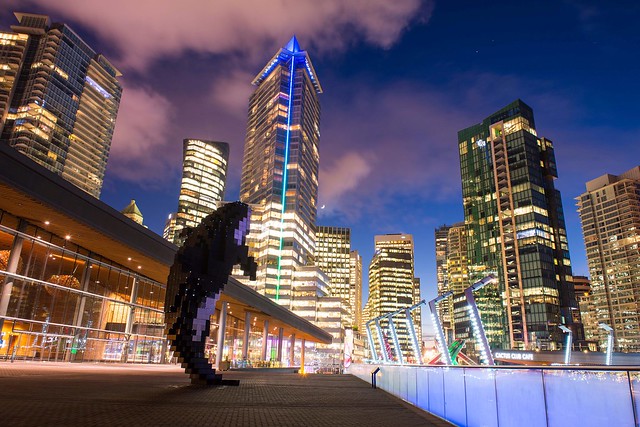 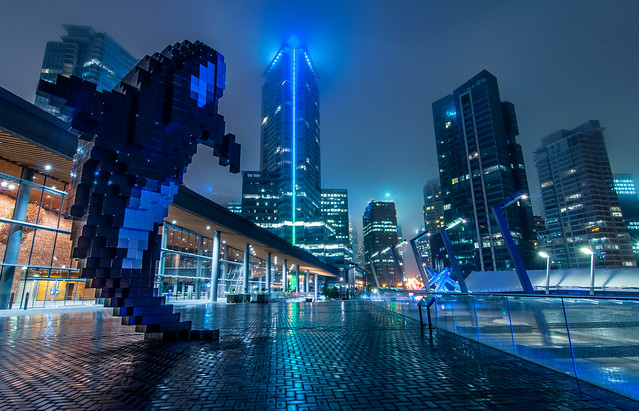 If you’re not a fan of the whale itself, you can’t help but love the view. I noticed that the majority of Digital Orca photos that I came across are all shot facing north, capturing the mountains in the background. The piece is only two years old but it’s quickly turned into a true Vancouver Icon.

Previous Vancouver Icons posts include: The Crab Sculpture, Girl in Wetsuit, The Sun Tower, The Hotel Vancouver, The Gassy Jack Statue, The Marine Building, and The Angel of Victory. Should you have a suggestion for the Vancouver Icons series please feel free to leave a note in the comments. It should be a thing, statue, or place that is very visible to the public every day.

Share8
Tweet1
Share1
Pin14
Email
Reddit
WhatsApp
24 Shares
Current Contests on Miss604
*All contests are open to residents of Canada only, unless otherwise stated. Contest timelines are published on each individual post along with entry methods. Some contests may only be open to those 19 years of age and older. Winners are announced on the contest blog posts. Contest policy »