Last year Tales of the Cocktail (“TOTC”), the legendary New Orleans-based festival for bartenders, mixologists, and lovers of libations, went on tour for the first time and was hosted in Vancouver. It was such a success that it has returned for a second year to celebrate the city’s emerging cocktail culture. 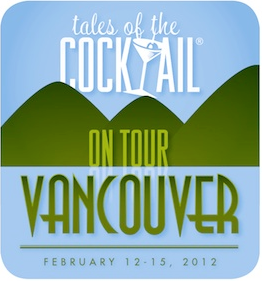 Held once again at the stunning Fairmont Pacific Rim Hotel, the festival continues to grow with several new events including five tasting rooms, Meet the Maker, a specialty coffee bar and the Mott’s Clamato Caesar Bar.

Toasted at events throughout the four days will be Jacob Sweetapple’s Roaming Buffalo Punch, the official cocktail of Tales of the Cocktail on Tour Vancouver 2012. The Vancouver mixologist’s bourbon, Cointreau and cognac concoction was chosen by a panel of cocktail experts from more than 50 submissions by Canada’s most accomplished bartenders.

Last year I interviewed Jay Jones about TOTC coming to Vancouver. Jay is Consulting and Founding member of the Canadian Professional Bartenders Association and Lead Bartender at Market by Jean-George at the Shangri-La. He was also recently named Canada’s Top Bartender by EnRoute Magazine. He told me previously that hosting this smaller festival, based on the New Orleans event, reflects Vancouver and also Canada’s growing cocktail culture. “We’re known for our hospitality, natural beauty, restaurants, chefs, wine, and environment, and now you can add ‘great cocktails’ to form a complete package.”

These are just a few of the events lined up each day: Your choice of 3 Seminars: Born to Mix with Dushan Zaric, Punch and Beyond: Colonial American Drinks with Wayne Curtis, Bitter Not Twisted with Jacob Briars, Tequila Evolved with Eric Lorenz, Charlotte Voisey and Iván Saldaña

Not included in the pass price, you can choose from 8 separate Spirited Dinner Series events all happening on Monday night. Tickets can be purchased individually for these events if you’re not planning on attending the rest of the festival. Choose from East Meets West at Granville Room, Vodka’s Dead Long Live Belvedere! at Chambar Restaurant, Hendrick’s Gin Spirited Dinner at West Restaurant + Bar, A Spirited Affair at The Waldorf Hotel, Twisted Classics at The Refinery, Genever Say Never at MARKET by Jean-Georges, La Belle Époque at Kale and Nori, or Sazerac Southern Style at Hawksworth.

Share2
Tweet
Share1
Pin
Email
Reddit
WhatsApp
3 Shares
Current Contests on Miss604
*All contests are open to residents of Canada only, unless otherwise stated. Contest timelines are published on each individual post along with entry methods. Some contests may only be open to those 19 years of age and older. Winners are announced on the contest blog posts. Contest policy »
Comments are closed on this post
Advertisement