This post was published on the night of the riot downtown. Please scroll down to view updates and details that have been published throughout the days that followed. After the Vancouver Canucks lost their battle for the Stanley Cup to the Boston Bruins over 100,000 people downtown began their journey home. Unfortunately, many of those thousands stuck around to wreak havoc, engage in violent activity, start fires, loot stores, and harm others. Police read the riot act about two hours in and said whoever stayed downtown could get arrested however if you left, you could go home in peace. Unfortunately a mob of criminals (let’s not call them Canucks fans) has been making its way down Georgia Street. They smashed windows at The Bay, looted, and moved on to London Drugs at Granville, Chapters on Robson, and are now moving West.

Throughout all of this despicable activity, cameras have been rolling. We’ve seen looters in plain sight on CBC News, CTV News, and Global. We’ve seen the faces of the men who lit the car fire on Hamilton. We have witnessed unruly men and women throwing newspaper boxes and walking out of stores with goods in-hand. All those of us at home can do is watch, and hopefully get the word out about transportation and alerts – for everyone’s safety.

If you would like to help out in any way – because we all care about our city – here are a few ways:

This violence is embarrassing and above all dangerous to emergency crews and the general public. “There’s hardly a window around us,” reported Chris Gailus on Global BC. CTV’s Rob Brown said, “It’s amazing that people feel so comfortable walking in front of their fellow citizens and stealing.”

After Vancouver finally showed its beauty and grace on the world’s stage during the Olympics last year, this has bumped us back down a notch. We won’t wake up tomorrow and mourn the Canucks’ loss. We’ll mourn the loss of civility and order that was experienced on the streets tonight.

Update 11:30pm For some perspective, this is happening blocks away from my house. As a Canucks fan, resident of downtown Vancouver, and someone with a voice online, I’ll be sharing updates for as long as it takes to get through this.

Update June 16 12:00am Please read the official statement from Vancouver’s Mayor Gregor Robertson (this was his second of the night) and this article from the Globe and Mail, which is why the more uplifting “#thisismyvancouver” was also trending on Twitter into the early hours of the morning. 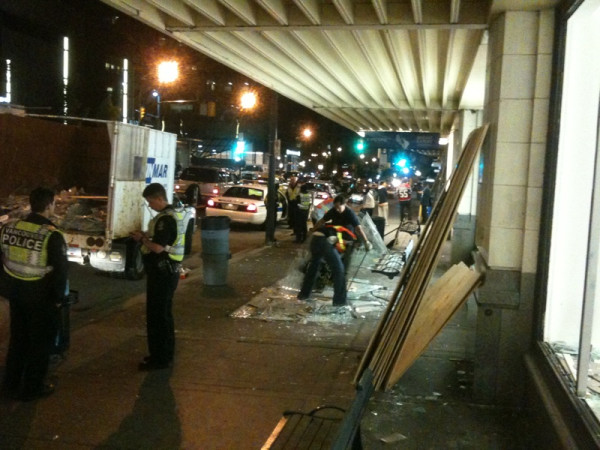 Update June 16 Ed Lau also posted a plea on his blog, For Our City, For Our Canucks, End the Stupidity Now” and Steffani Cameron has published a fan’s poem. Kimli has also identified several of the rioters on her blog. 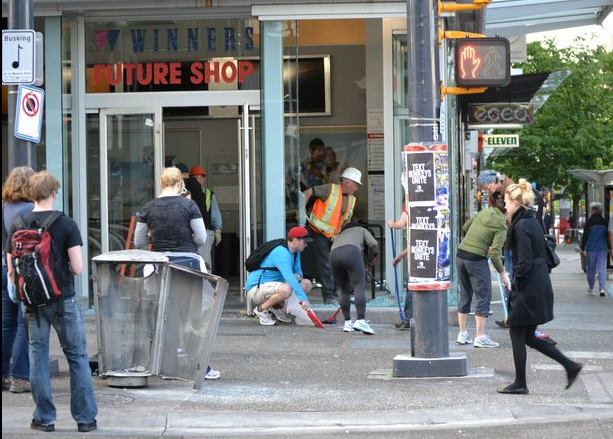 Update June 16 8:00am I was on CanadaAM at 5:05am to talk about how people have rallied through social media and started organizing events for the morning to help clean up. As of about 8:00am June 16th several people had already started to assist with cleanup efforts after City crews worked through the night. Cleanup photos submitted to me by my friend Natalie Binns (right)

Update June 16 11:20am The Vancouver Chief of Police is saying the riots were caused by anarchists and criminals disguised as Canucks fans. 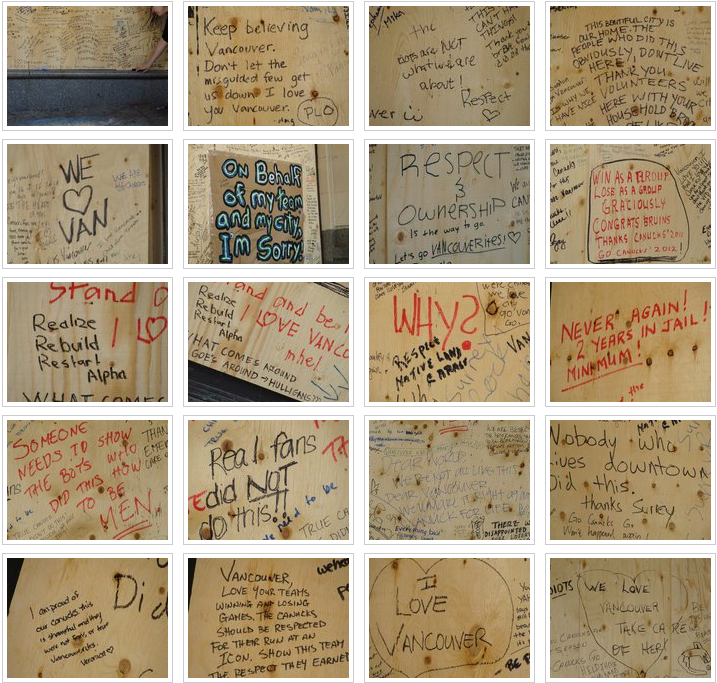 A collection of photos from the “Wall of Love” at the boarded up Bay downtown.
Assembled by the Downtown Vancouver BIA The support from Vancouverites continues to pour in. There’s even a “Wall of Love” outside The Bay, which was smashed and looted. People are signing it and offering words of encouragement and sympathy… along with apologies. Update June 16, 2:00pm After scores of people came downtown to help clean up the aftermath, the City of Vancouver issued an official statement thanking them for their efforts.

“The final sparkle to our clean-up effort has been thanks to the scores of volunteers who headed Downtown this morning with determination, garbage bags and other supplies to help with the clean-up. Those efforts are truly inspiring and appreciated. The city is certainly returning to normal very quickly.” The tag #vancouvercleanup was used all day on Twitter by volunteers who were picking up trash, scrubbing storefronts, leaving messages of support – and thanks. Update June 17 2:50pm It has come to my attention that The Bay downtown will be hosting a FREE pancake breakfast tomorrow, Saturday June 18 from 9:30am to 11:30am. They would like to thank the volunteers and helpful citizens who showed them support after the store was a prime target during the riot Wednesday night. I confirmed with my source at The Bay that this will be taking place and they wanted to get the word out through grassroots channels — the same way word spread about the cleanup.

I spoke to The Bay’s media contact and received the following quote by email from Dana Hall, Store Director: “After seeing the huge amount of support on Thursday morning, the Bay really just wanted to be able to give back to those who volunteered their time and energy to repair our store and the rest of the Downtown core. Not only are we hoping to say thank you to the clean up volunteers but also to those who put themselves in harms way on Wednesday night to protect downtown. We are truly thankful that those people stepped up to show the city what the real Vancouver is made of. It was amazing to see the community come together on Thursday for something good and we wanted to pay it forward.”

A few people have asked on Twitter if they can volunteer for the breakfast. My contact told me that the associates would like to do it for the community but if they need assistance they’ll put out a call.

Update June 18 11:00am The CBC has tracked down the couple from the famous “kissing couple” photo during the riots to get the real story behind the image.

Update August 2011 The Vancouver Police have published a website where they are asking the public to help identify riot suspects.

Update September 1, 2011 The independent review of the riot has been released.

Also on Miss604.com
« Worldwide, We Are All Canucks
FUSE at the Vancouver Art Gallery »