Even though Vancouver is a hockey town, there is a strong history of baseball that runs deep. From the Asahi at the Powell Street Grounds to our Little League World Champion participants and of course, the legendary Nat Bailey Stadium where Babe Ruth once visited. I admit, it wasn’t until I married a man from Iowa that my passion for baseball grew. He took me to my first Vancouver Canadians game, Seattle Mariners game, and to see the Cedar Rapids Kernels in 80% humidity on a steamy midwest afternoon. We’ve even played catch at the Field of Dreams.

Thanks to the BC Sports Hall of Fame, I’ve been able to learn more about baseball history and some of the great British Columbians who have played the game over the last few decades. Each week, for the next three weeks, I’ll be featuring a Hall of Fame Inductee and their contributions to baseball. Today’s featured BC Sports Hall of Fame baseball inductee is Larry Walker 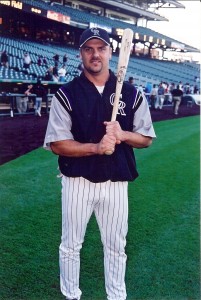 Courtesy BC Sports Hall of Fame

Hometown: Maple Ridge, British Columbia
Inducted: 2009
Biography: Larry Walker is one of the greatest Canadian-born ballplayers of all time. Larry played 17 major league seasons from 1989-2005. Walker established himself as one of the most feared combinations in all of baseball fusing blanket fielding with a monster bat. Over the course of his 17-year career with the Expos, Colorado Rockies and St. Louis Cardinals, he would win seven Golden Gloves, three Silver Sluggers, and was named to five All-Star Games.

His career season came in 1997 with the Rockies, where he hit .366 with 49 homers, 130 RBIs, and 33 stolen bases earning the National League MVP, the first Canadian-born player ever awarded this honour. A year later, Walker won the Lou Marsh Award as Canada’s most outstanding athlete.

With each profile, I will also be hosting a series of giveaways that include 10 tickets as well as the chance to throw out the ceremonial first pitch. I’ll be drawing one winner each week who will be able to bring their own cheering section with them, using all 10 tickets.

Here’s how you can enter to win for the game Monday, June 20th at 7:05pm against the Yakima Bears.

I want to throw out the first pitch & win 10 tickets to see @VanCanadians thanks to @BCSportsHall & @Miss604 http://bit.ly/kM6ZY8 Fresh off Stanley Cup fever, Vancouverites can enjoy ‘Nooners at the Nat and warm summer evenings at the ballpark starting June 17th as the Vancouver Canadians begin their season.

With individual game tickets in the reserved grandstand starting at just $12.50, it’s an ideal destination for families, and even fun night out with someone special (with a dog ‘n a beer).

Update Thanks to Rich at Patterson Brands we also have a Vancouver Canadians cap to give away with this prize package (value $25).

Update The winner is Josh!