The mascots for the London 2012 Olympic Summer Games have been revealed and coming fresh off a Quatchi-high in Vancouver, I can’t help but compare.

The Vancouver 2010 mascots were revealed in 2007 as Sumi, Quatchi, Miga and their unofficial sidekick Mukmuk appeared in a West coast inspired cartoon introduction. The London 2012 mascots have been presented with a similar way, with a full background story about the chosen pair, Wenlock and Mandeville. They came from the molten steel in Bolton that was used to build the Olympic stadium and were lovingly hand-crafted for two lucky children. They then sprung to life thanks to a magical rainbow and are now blogging up a storm.

Now the mascots feel the need to be in London for 2012 – and the creative teams are working on the journey they’ll make to be there in time for the Games. As I’ve said before, the mascots are entirely owned by the London Organizing Committee (Locog). But we’ve been aware for some time of what was being planned and – if creatures made from steel can be said to evolve – we’ve followed their evolution. So do I have a view on them? Well, in this case it’s irrelevant what I think. The judges are the people of Britain and beyond. 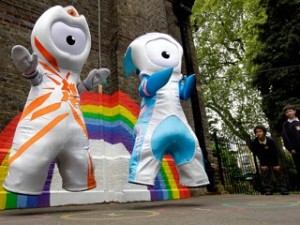 Miga, Quatchi, and Sumi made it across the province, were the highlight of the Olympics for some, and wound up in some pretty interesting places around town. In fact 42% of my readers said the mascots were their favourite symbols of the Vancouver 2010 Games.

I’m curious to see how the one-eyed Wenlock and Mandeville will be accepted but for now, I can follow both on their official Twitter accounts (@iammandeville @iamwenlock) to see what they get into leading up to 2012.

Also on Miss604.com
« Sex and the City Scratch & Win Ticket Prize Pack
A Night at MOV with Conor Holler, Volume 1 »