The play, Refuge of Lies, is based on the real-life story of UBC botany instructor Jacob Luitjens who, in 1992, at the age of seventy-two-years of age, was accused of having collaborated with the Nazis in Holland during World War Two. Vancouver playwright and director Ron Reed was so struck by this scandal, and, in particular, the extent to which the Mennonite church, to which Luitjens belonged defended and supported this man, that he decided to write a theatrical adaptation of the events. 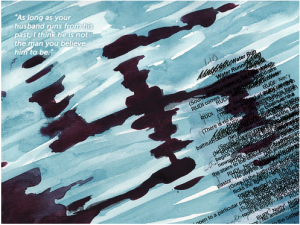 In Reedâ€™s version, devout Mennonite Rudi Vanderhaal (Terence Kelly) confronts his dark past when Dutch-Jew Simone Katzman (Howard Siegal) travels from Holland to Vancouver to publicly reveal that Mr. Vanderhaal is not who he says he is; that in fact, Vanderhaal aided and abetted the Nazis in the murder of his relatives during war and concealed his past when immigrating to Canada fifty years ago.

The play then flips back and forth between the perspective of Vanderhaal and the perspective of Katzman, who is accompanied by his young niece Rachel (Erin Germaine Mahoney). What then ensues is Vanderhaalâ€™s internal battle Vanderhaal externalised through dreams and hallucinations, and an external battle between Katzman and his niece on the justness the nature of justice internalised by silent moments and objects (plastic wrapped sandwiches and old prayer shawls).

Scenographic Designer Laughlin Johnston did an amazing job with the little (but charming) space the Pacific Theatre has. For instance, a bed tucks neatly under the top floor, doubling as both the Vanderhaal residenceâ€™s top floor and heaven/dreamland. There were other exquisite touches to the set, like having tiles on the floors and walls imprinted with portraits of Holocaust (symbolizing how memories are part of our internal structure) and having a bathtub, whose facet would occasionally run at the right moment in the play (symbolizing cleansing and rebirth).

Both Kelly and Siegal gave incredibly strong performances, and I found myself switching from empathizing with the old man seeking forgiveness to the old man seeking justice for his families and all victims of the Holocaust. Mahoney, in particular, gave a heartfelt performance of a young Jewish woman, fresh out of university, trying to reconcile the traumatic past of her ancestors and her political beliefs on what constitutes true justice. I also really enjoyed Anthony F. Ingramâ€™s performance as the Mennonite pastor, torn between shepherding his member, Vanderhaal, to the light and really helping him understand that the past is sometimes not past and that forgiveness doesnâ€™t simply happen with just a prayer.

Though I thought the blocking got a little chaotic at times as there was a lot of traffic on stage between the (sometimes short) scenes (I found myself often distracted from the story by watching actors walk through move the set around), I really enjoyed this play. In particular, I really liked the ultimate, over-arching questions Reed poses: What is forgiveness? Who grants forgiveness? And who is the ultimate judge? Man or God?

Michelle Kim is a Vancouver-based novelist and actor. You can read her other posts contributed to Miss604.com here.