About an hour outside of Prince George along Highway 16 lies a practically unmarked treasure, the Ancient Forest. 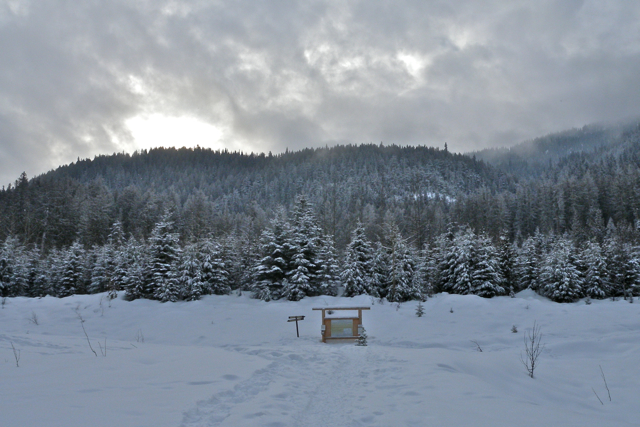 What makes this plot of land so unique, aside from being a grouping of 800-2,000 year old cedars, is that it’s a rainforest… but it’s inland. Being 800km in from the coast of British Columbia this pocket is actually a snowforest and I was lucky enough to explore under the canopy of these aged coniferous giants last weekend. 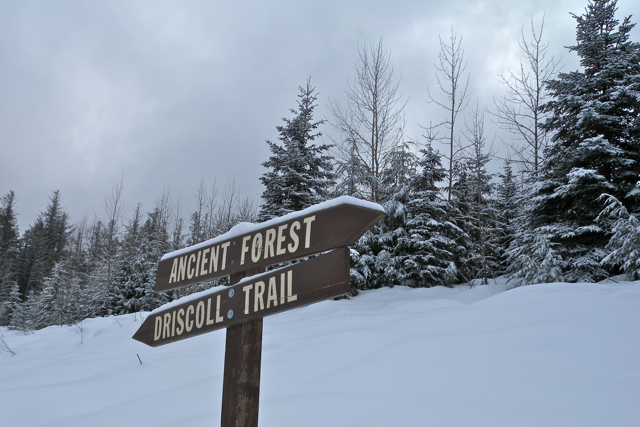 The Ancient Forest is free to visit year-round but for the sake of learning a bit more about the area we were escorted by Trevor and Laurella of The Outdoor Life Adventure Company. We also had Dave Connell along with us who is an Environmental Planning Professor at the University of Northern BC. Together our group set out on snowshoes along a looped trail that takes about two hours to traverse. 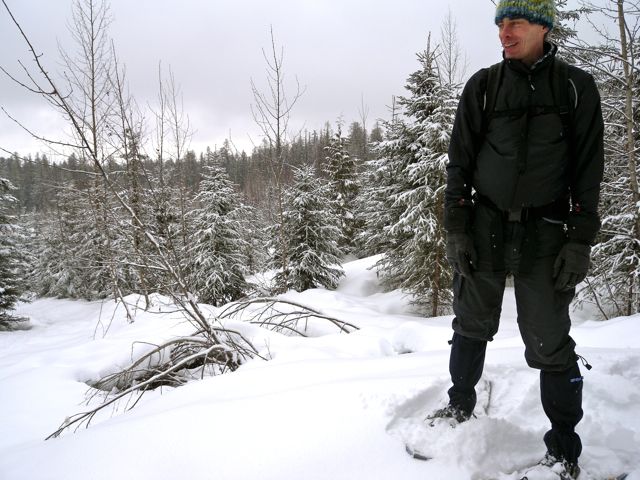 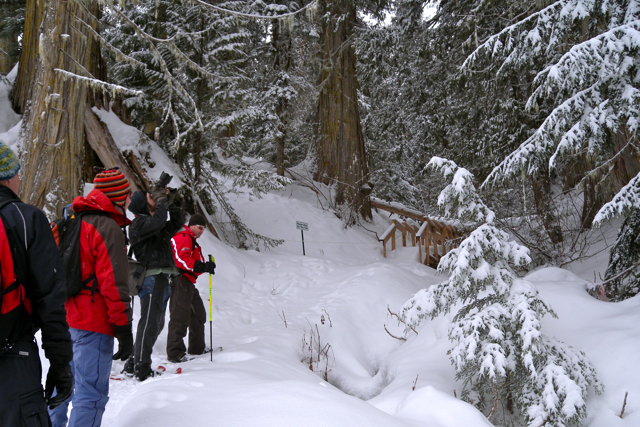 Our first pitstop was at the “Big Tree”. Now I’ve seen some big trees in my time and this one’s at the top of the list at 16 feet in diameter. 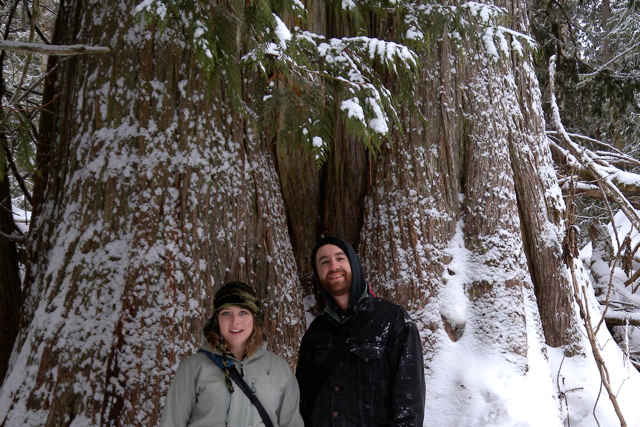 We continued along the trail, over creeks, wood-planked bridges, and through clusters of trees reaching up to the sky. At one point I think it stopped snowing but flakes continued to float around like flour, gracefully sifted through the outstretched arms of the giants. 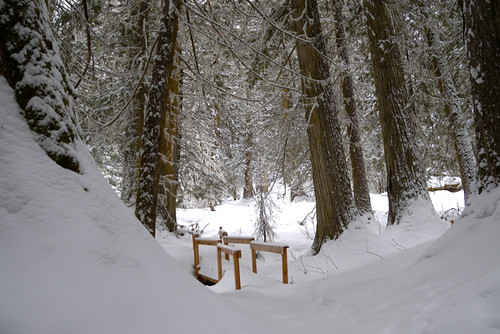 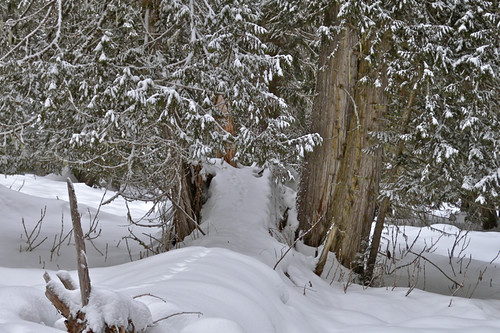 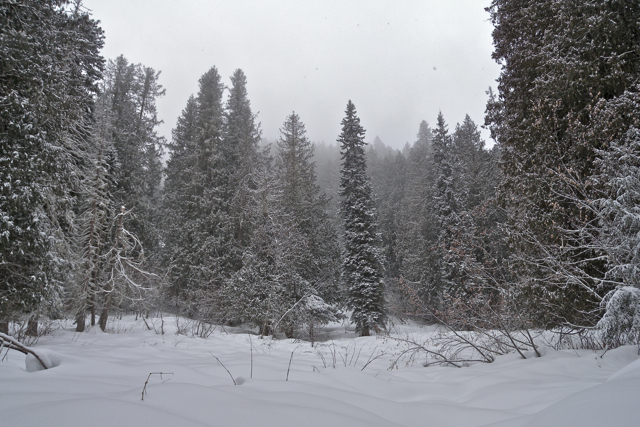 Dave said that he’s heard a visitor refer to the forest as “decadent” which is pretty spot on. Covered in snow we couldn’t spot the rich, entangled root systems or the natural mulch that lined the path however the are is filled with Red Cedars and various types of plants, fungi and lichen that thrive in a snowforest ecosystem. 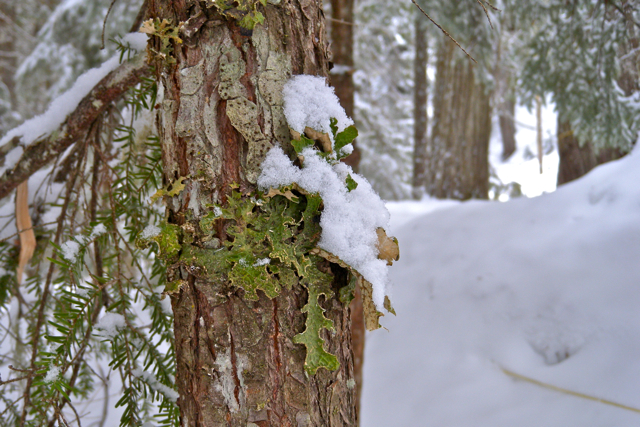 From “old man’s beard” moss, to smooth flat fungus, or technicolor yellow striping along the side of the trees. Even in the dead of winter the forest is absolutely alive with colour. 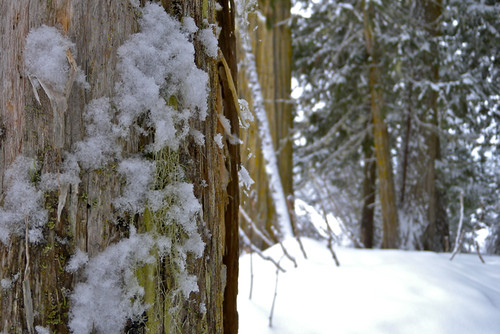 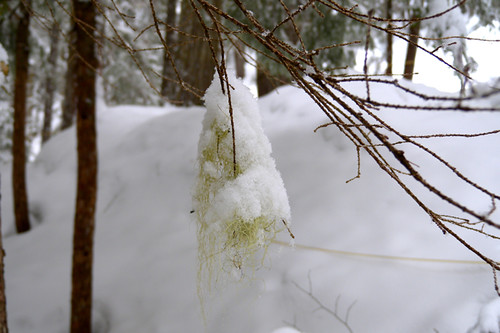 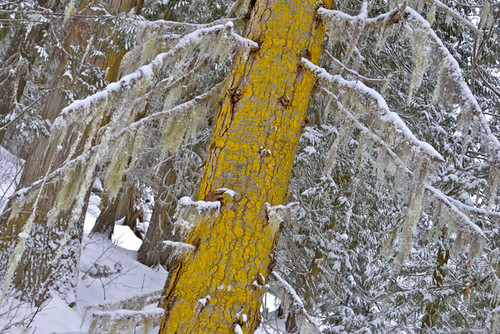 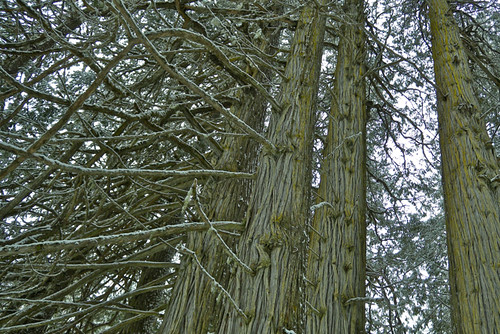 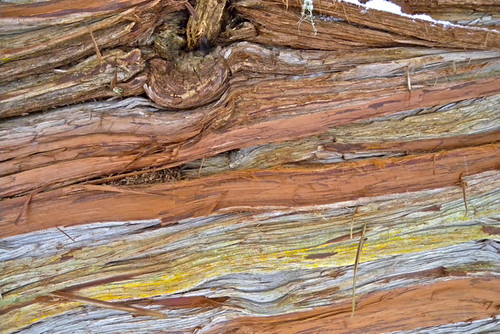 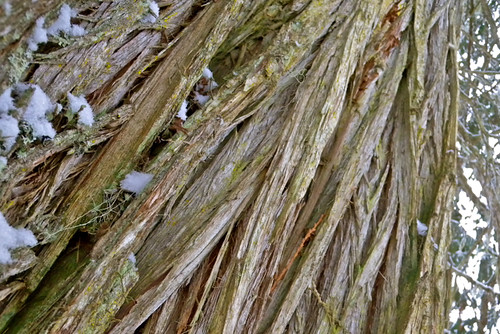 “It’s a sense of awe and a sense of being,” said Dave. “And not like being in the city, but as in being human.” 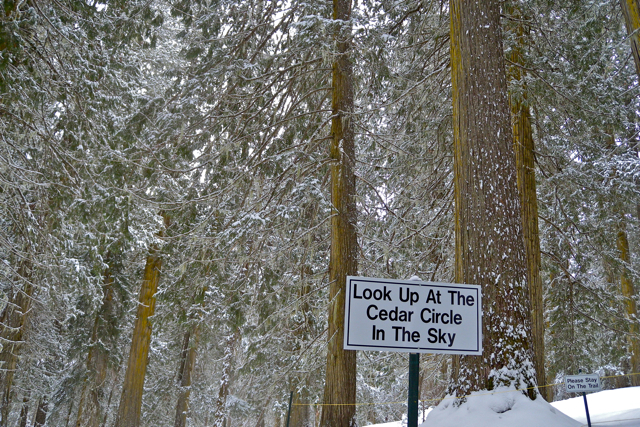 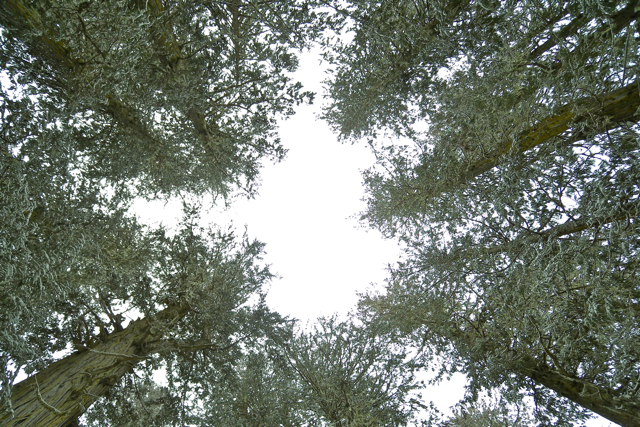 We took the trail loop up to Treebeard Falls and then down and around to old Treebeard himself. A towering cedar with arms outstretched toward the sky, aptly named after the character in the JRR Tolkien books, The Lord of the Rings. 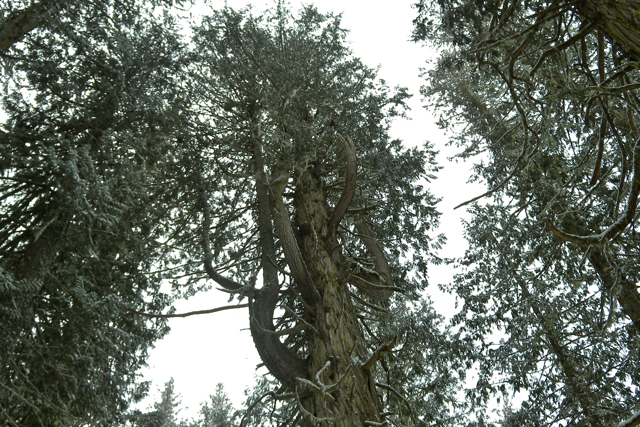 There are information signs at each specific point of interest on the trail and my favourite element was that some of the messaging was written on behalf of a tree. 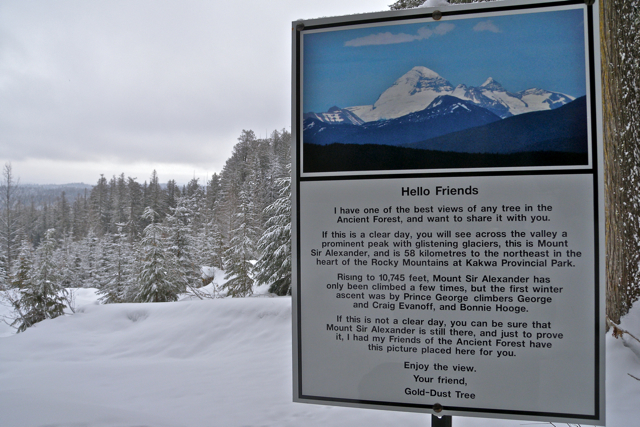 Along our route there was evidence of the logging industry coming in and marking territory using bright orange spray paint. The Ancient Forest lies on a patch designated as “Block 486” and its future is still on shaky ground but there’s hope. 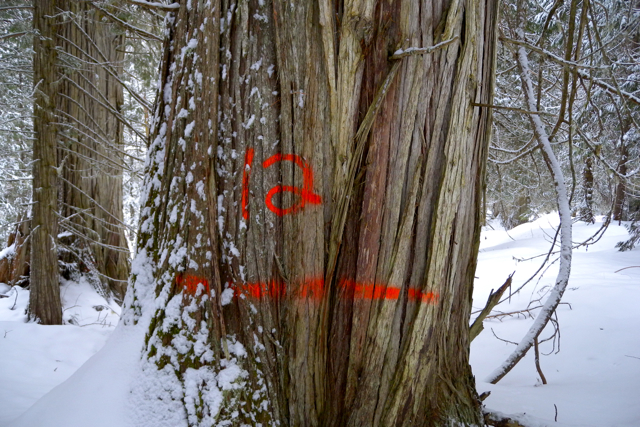 Without the continuing research and dedication from the folks at UNBC at the Dome Creek Forest Information Committee, the Ancient Forest may not be around today or in the future. There’s a documentary film available called Block 486 that explains a bit of the story. 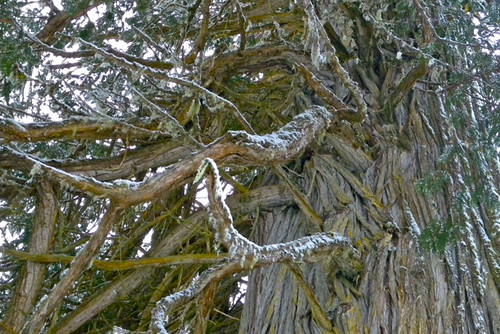 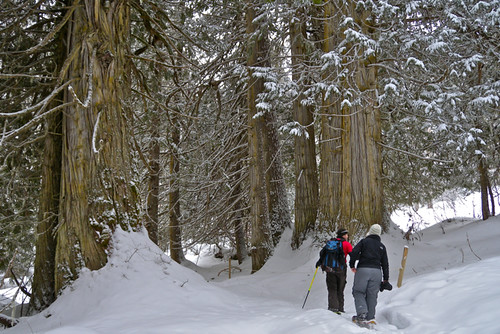 Dave is hoping people like me can get the word out about this fantastic place and that we’ll be able to explore the non-timber side of forest economics. If we can get more visitors then maybe everyone will be able to discover just how special this area really is – making sure the land is protected and appreciated. 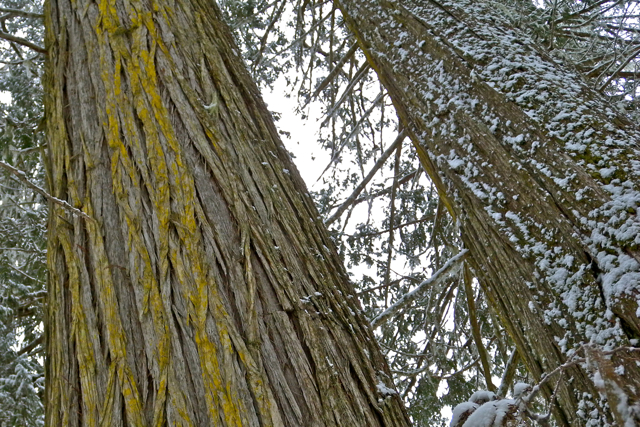 When I was growing up my family took part in many forest-exploring adventures. Each week it was a different park in the Lower Mainland and each summer it was a unique camping experience. I love being among the trees even when I can only get my fix by venturing down the lesser-known trails in Stanley Park. I’ve stood among the Redwoods in California and I’ve named my favourite Western Red Cedar in Stanley Park. Now, I’ve snowshoed the Ancient Forest. 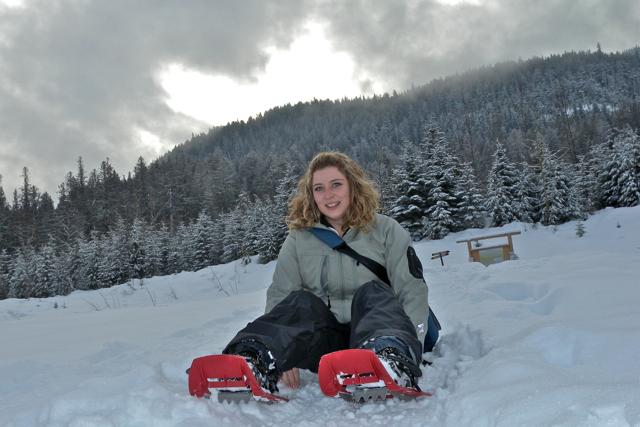 Here’s hoping I can help just a bit by spreading the word so that this gem can live on for even more generations.

Share47
Tweet
Share
Pin
Email
Reddit
WhatsApp
47 Shares
Current Contests on Miss604
*All contests are open to residents of Canada only, unless otherwise stated. Contest timelines are published on each individual post along with entry methods. Some contests may only be open to those 19 years of age and older. Winners are announced on the contest blog posts. Contest policy »