Recently the Vancouver International Airport (YVR) completed its new, free, and public Observation Area. I was invited to come and check it out a while back but since I’ve been traveling so much, I’ve been at YVR for many other reasons lately. I was finally able to take the Canada Line out yesterday and explore the renovated and Olympic-ified Domestic Terminal. 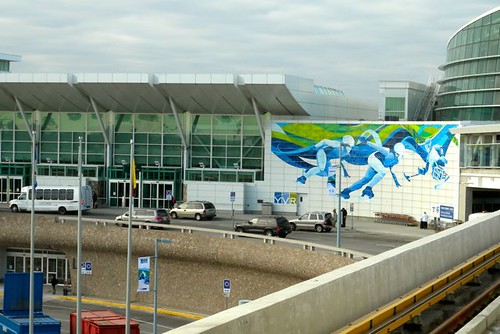 Located on level four of the Domestic terminal, you can get to the Observation Area by heading straight back to the food court and up the escalators located near the windows. From there you can explore their mini aviation interpretive centre including oodles of information about YVR, the history of flight in BC, Sea Island, the Musqueam people (as Sea Island is their land), and of course all you wanted to know about airplanes and airports.

The first thing I did was push some buttons on the scale model of Sea Island. Each button lights up little bulbs that highlight a runway, terminal, roadway or area of interest on the map. 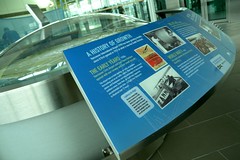 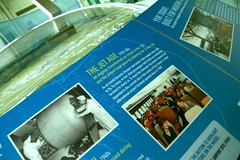 Three touch-screen video podiums guide you through quizzes and videos such as a look at the First Nations art around the airport — most of which is behind security lines so this is a good chance to check it out. Other videos include the history of flight in BC, job shadowing with people such as the wildlife manager, air traffic control, and various ground crew workers. The biggest hit so far is the video “Follow My Bag” that gives you a suitcase’s view of its trip through the belly of the YVR luggage handling system. 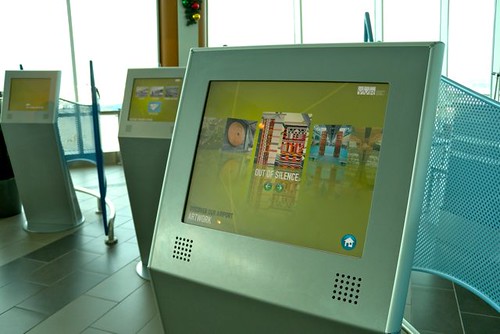 Along the windows which face the Strait of Georgia and Vancouver Island, there are information boards that guide you through things like RADAR, types of airplanes, and what all those short vehicles are doing as they whiz past, following the painted lines on the concrete. There are also eight telescopes at various height levels so that you can spot bags being loaded, view passengers through windows, or actually peer into the cockpit of an arriving plane. 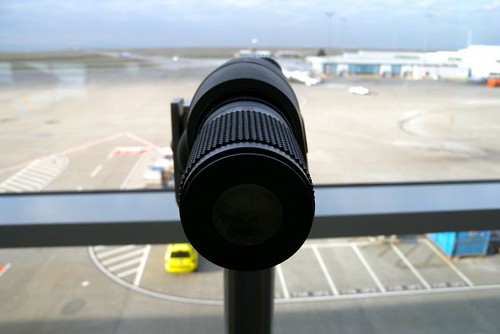 I also spotted some solar panels on the roof of the domestic terminal and was told they are used to heat water in the terminals. These have actually been there since 2003 and heat 800-gallons of hot water every hour. Another thing I discovered was that what my family used to call the “golf ball” out between runways is actually something called the golf ball. It is a crucial component to the RADAR system, communicating information up to the air traffic control tower. 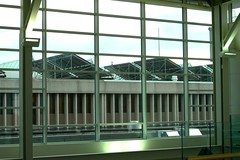 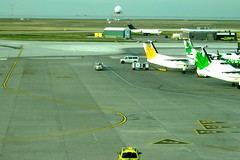 Back over at the video kiosk, I could click on WebTrak and see a live map graphic of planes currently in the air over the region. With a 10 minute delay you can actually see which flights are where, a system that is helpful when it comes to noise concerns. If a big jet flies over your house and wakes everyone up, you can go on WebTrak, see the flight path and make your report to YVR.

YVR also scored the “BC Explorer“, a flight simulator that has made the rounds across the globe to showcase our province. With the joystick you can “fly” over the province and “land” in various communities where interactive and informational videos will play, to educate you a bit about the region you chose. 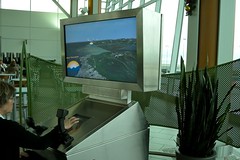 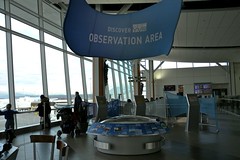 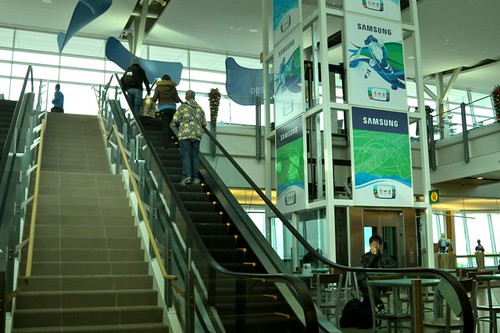 The 500 square-meter Observation Area is an extension of the food court so you can shop, grab a bite to eat, sit on one of the 150 seats, and hang out while awaiting a flight or just as an afternoon outing. There’s also free wifi everywhere in YVR so you can sit by the windows, watch plans come and go, and get some work done on your laptop. There are a lot of history components in the displays, which instantly draw me in, but I couldn’t help imagining the sunsets you must be able to catch from that towering view. I profiled Flight Path Park back in 2007 because it was a favourite of my niece and nephews but now they have another place to get their fill of free airplane fun, indoors. With those floor to ceiling windows that face directly West, you can have lunch or simply some fun playtime while towering over the tarmac — watching as planes touch the ground and reach the sky. Stop by the Observation Area within the next few weeks and you can enter to win a behind the scenes tour of YVR for you and 3 friends or family members. The tour will take you down on the tarmac and around baggage loops with an all-access guide. You can also download the entry form online but it will need to be dropped off in person.