As we were taking a stroll down Dunsmuir Street in Cumberland this weekend, Keira was filling me in on all of the regional history. I realized that even though I’ve profiled the origins of street names in Vancouver, I have never mentioned Dunsmuir and the family’s impact around the province.

Aside from the street traversing downtown Vancouver, I’ve noticed the Dunsmuir name in a few other locations so here’s a brief introduction to the family and their legacy.

Robert Dunsmuir was a coal baron whose family ruled the industry in BC from the 1870s until the turn of the century. From railroads, the formation of towns, and even government office, the Dunsmuir name helped shape the province in many forms. Although the reign was not without scandal, such as the Dunsmuir’s opposition to organized labour, Dunsmuir was an economic force to be reckoned with for decades.

In the 1890s Craigdarroch Castle in Victoria was built for Robert’s wife, Joan Olive (White) Dunsmuir. 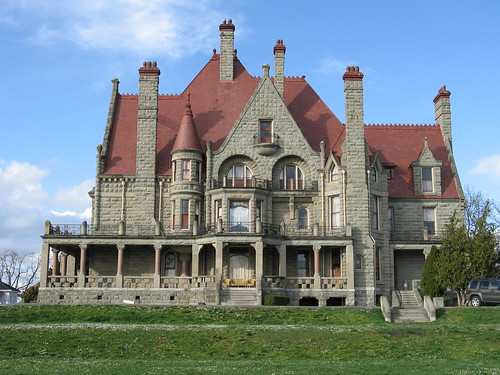 Robert’s son, Alexander, moved to the San Francisco Bay area in 1878 to manage the family business and built Dunsmuir House for his wife Josephine in 1899.

Heir to the Dunsmuir business fortunes, James managed the Dunsmuir coal empire from 1876 until 1910 and sold his Esquimalt and Nanaimo Railway to the Canadian Pacific Railway in 1905.

James was elected to the BC legislature in 1898 and also served as the Premier until he resigned in 1902. “Appointed Lieutenant-Governor in 1906, he was an uneasy occupant of the Vice-Regal office. The criticism he received when he refused to give Royal Assent to anti-Oriental legislation turned to howls of outrage when it was discovered he was recruiting cheap Japanese labour to work in his mines.” [Hatley Castle] 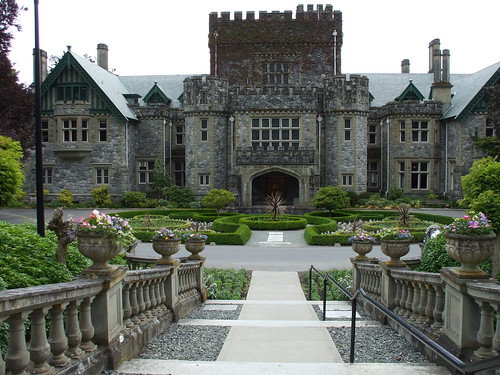 James had Hatley Castle / Hatley Park in the Colwood area built for his family in 1908. You may recognize it as the home of Lex Luthor on the series Smallville, where they use exterior shots as Luthor Manor. The X-Men films were shot inside Hatley Castle as it served as Professor Xavier’s School for Gifted Youngsters.

In 1909 James also founded the town of Ladysmith, naming it after the victory at the Battle of Ladysmith during the Boer War (the first war in which Canada participated).

Hatley Castle is now the home of Royal Roads University and a museum that runs tours as well as bookings for private functions. Members of the Dunsmuir family are scattered across the globe yet in recent years several have been back to the Castle to visit and reminisce. [Royal Roads]

I would highly recommend checking out these two castles and while you’re in the Greater Victoria area, Fort Rodd Hill & the Fisgard lighthouse offer up some excellent local history as well.