In my daily quest to find history tidbits to share with my readers about our fair city sometimes the best leg work that can be done is by simply going for a walk. As I was walking down Richards street yesterday on my way to dinner I passed the large “Richards” condo development sign, next to Richards on Richards. 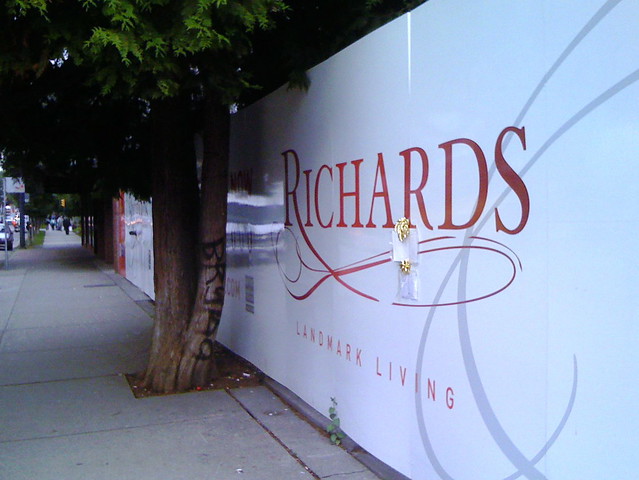 If you recall last June the “little green house” at 1062 Richards street was sold to make way for development. The owner, Linda Rupa, held out for many years and finally sold her cottage and two 25-foot lots in 2007 for $6 million, which is a nice chunk of change compared to the $16,000 she paid for it in 1962. 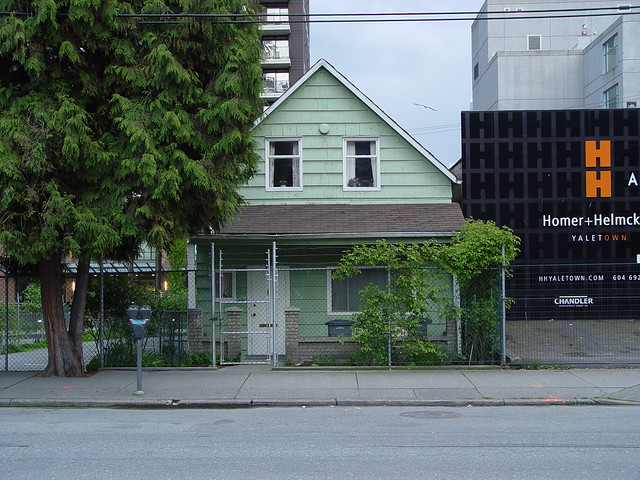 Putting it off for so long because she loved the house so much, the 80-something year old’s bank account finally caved and the $36,000 a year for property taxes on the lots proved to be too much (leaving her with literally pennies to her name) pretty much leaving her no other option but to sell.

“I’ve been here a long time, and I’m just a Safeway girl, I worked for Safeways throughout my career. And the Army and Navy department store when I first came to Vancouver. In those days we only made 99 cents an hour. [Vancouver Sun]

Rupa watched as the properties around her were bought up and the landmark houses where her friends lived for 50 years were demolished one by one. She reminisced in the Sun article, dropping names of her neighbours and fellow Vancouverites from back in the day.

It was a lovely neighbourhood, where people cared about each other,” says Rupa, who gives her age as “just about 80.” “Really a nice neighbourhood. Mr. Kripps on Granville street, who has the drug store, he’s an old-timer here. We had the Filippone and Iaci families.

You may recognize the name “Fillipone” or Philliponi which is the family that owned The Penthouse over the years [VancouverHistory].

The slick orange and white boards advertising the proud project by the Aquilini Investment Group sits next to the old night club and current live music venue. However, during my walk yesterday I spotted something taped to it that seemed a little out of place. Upon closer inspection I had found two birthday cards dated June 8th. Directly underneath it, wrapped in the same protective plastic was another card, “Happy 100th Birthday little green house there’s been many warm memories of people and pets through the years. Enjoy your new facelift, (signed).

Pieces of Vancouver’s past disappear everyday, sometimes it’s for the best and shows our growth as a city, but many times we still need to slow down and appreciate where the city came from. I bet those little houses on Richards street sure could tell some stories.

If you’re interested in these shadows and traces of old Vancouver, check out the Flickr group Vanishing Vancouver.

Share16
Tweet
Share
Pin
Email
Reddit
WhatsApp
16 Shares
Current Contests on Miss604
*All contests are open to residents of Canada only, unless otherwise stated. Contest timelines are published on each individual post along with entry methods. Some contests may only be open to those 19 years of age and older. Winners are announced on the contest blog posts. Contest policy »