Next up in the Metro Vancouver Park Series is a guest post written by Terry from West Van who covers the beautiful and multi-functional Ambleside Park. 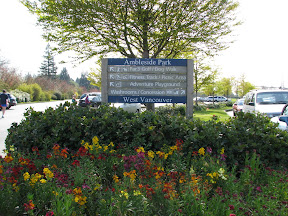 Ambleside Park is the best know attraction in West Vancouver that is not a shopping mall or a ferry terminal. West Vancouverâ€™s citizens gather at Ambleside to socialize, engage in either organized or pickup sports, to exercise themselves and their canine friends or just to enjoy the sea air.

Metrics The park is bounded on the East by the Capilano River. On the west by 13th Street and Hollyburn Sailing Club. On the North by Marine Drive. On the South by the northern shore waters of English Bay. Ambleside is bisected by the Canadian National rail line.

The beach within Ambleside is a combination of rip wrap stones and sand beach. The sand is 600 meters long and located at the west end of the park. There is 1.2 km of seawall which hugs the shoreline from Park Royal to 13th Street. The park includes 6 sports fields, 2 artificial, 2 grass and 2 all weather (that means gravel). Typical configuration in spring is a baseball diamond, softball diamond, and field hockey. In winter rugby, soccer and football are all played in Ambleside.

Between the CN Rail bridge over the Capilano River and the Ambleside Pitch n Putt there is a modest fitness circuit. The park also includes a skateboard area, 3 basketball courts and 3 tennis courts.

The Pitch n Putt is a small Par 3 course with 1189 yards of total length. The 7th hole is longest at 114 yards and the 45 yard 17th is the shortest. Golfers of all ages and skills harmoniously enjoy leisurely paced golf at Ambleside. Cost is Adults $10 Seniors $8 children $6. 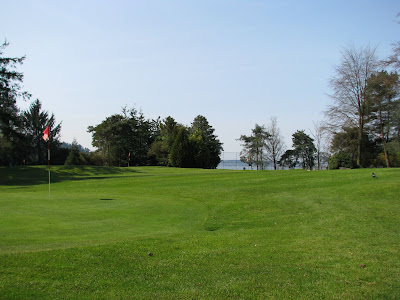 The park has a picnic shelter, total of 18 picnic tables and three barbeque pits. While youâ€™d enjoy a summer day, packed picnic, there is no need no bring your own food as there is a concession and several good near by restaurants. The concession building also houses large change rooms and a life guard station.

Near the concession building there is a play area with swings and other play apparatus suited to children under the age of ten.

Locals refer to the large off leash area east of the end Argyle Ave as Dog Beach. This area is extremely popular with north shore dog owners.

How to get there There are actually three accesses to Ambleside Park. Other than savvy West Van residents, the majority of use comes from the access off the foot of 13th Street in West Vancouver. Make your way to Park Royal mall and continue west to make a left at 13th Street and you are there. There is parking immediately to the left on either side of the rail tracks or in slots along Argyle facing the beach. Get off the 250 Blue Bus at 13th Street and you are within a few steps of the park entrance.

The other popular entry point to the park is from south of the Park Royal shopping mall. There is a gravel trail that skirts the west shore of the Capilano River and arrives at the Dog Beach portion of Ambleside. Many dog owners use this entrance as there is good parking and never a need to leash fido. 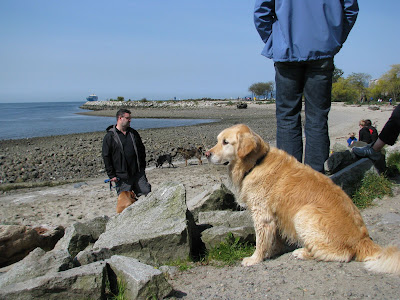 Finally, when you are traveling eastward on Marine Drive there is an access road between the western extent of Park Royal Village and the eastern most artificial turf field. This road is the access to the West Van Youth Center and the SPCA. There are a number of parking spots that are often used by those involved in organized sports.

Park Use I find it hard to say which of many activities is more popular in Ambleside Park. Just to walk on the seawall seems to be a simplistic approach to a park with so much to offer. But for many that is Ambleside park: a portion of the North Shore sea wall that run west to Dundrave pier.

Upon closer investigation you will often find a variety of uses and users.

Young, and not so young, new moms and dads tend to their children in the play area. Older folkes lounge on the benches. People of all ages swim or use the summer volleyball nets.

Young guys gather in the skate board park or in pickup basketball games on the courts daily. The slightly older dudes park their â€˜mercs and beamers along the beach. They gather in small groups to discuss, often in Farsi, the things guys of that age discuss. The counterpart girls are often clutched together on the logs arranged on the sand beach or enjoying a frozen treat from the concession.

Uber power momâ€™s armoured with latest Lulu Lemon wear purposely stride in pairs along the sea walk making their way to or from their next engagement. Toned metro-sexuals jog at a brisk yet polite pace.

Retired execâ€™s and their wives stroll in pairs. Often the overheard conversation is of kids in university or the merits of a Lexus over the Land Rover.

Down the east end at Dog Beach the pooches rule. An increased level of activity fills the air. Dogs chase their grotty old tennis balls or a stick flung into the ocean. Owners call after their barking dogs. Children noisily interact with their canine best friends.

Across the rail tracks, over at the organized sports fields, the kids compete while the into it moms hang on the chain link fence shouting encouragement. The more laid back parents line the bleachers in their designer shades sipping the Venti sized paper tumblers of fancy coffee drinks.

Clearly Ambleside is the focal meeting place of West Vancouver. Regardless of age, original culture or current socio-economic status our park by the sea has something to offer everyone.

History Ambleside was originally a garbage dump and log sort. A near by ferry terminal at the foot of 14th Street made the area popular with locals. Park status was given in 1912. While ferries ran to Vancouver beginning in 1868 this site became the ferry terminal in 1914. The Lions Gate Bridge which towers over the east end of the park opened in 1938. Yes, in West Vancouver we do refer to it as the bridge over the moat. 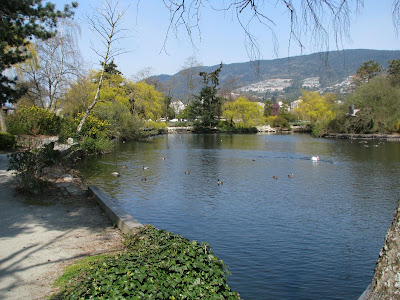 What you might not know. Green Heron nest in the duck pond at Ambleside Park. This is the only known nesting site, for these birds, on the North Shore.

In addition to ducks and swans there are turtles in the duck pond.

The best time to see cruise ships power out of Vancouver harbour towards Alaska, and the setting sun, is at 5:00PM on Sundays.

The sea wall walk passes under the rail road tracks at the Capilano River. The bed of the rail line is no more than three meters from the ground. Depending on how tall or brave you are, with the luck of timing, you may get far closer to the underbelly of a train than you may care.

Read more from Terry at the West Vancouver Blog where he offers plenty of hockey, Canucks and West Van commentary.

Also on Miss604.com
« Happy Birthday Ethan
H&M Vancouver and the Apple Store, a Match Made in Heaven »