I was at Simon Fraser University last September for the launch of the Spread the Net challenge and it was a pleasure to be back to hear the announcement that they were the winning school.

The challenge was to see which school across Canada could raise the most in support of Spread the Net’s mosquito net campaign with UNICEF. On Monday I sat down for a chat with campaign co-founder, Rick Mercer who is the host of CBC’s The Mercer Report. We chatted about SFU’s victory and how social media played a role.

You can listen to our conversation by clicking on the player below: Kudos to SFU’s UNICEF Club and all SFU students for a job well done raising $16,000 this school year. The Spread the Net Challenge will kick off again next fall however you can still learn more, donate or participate anytime, online.

Background music on the audio recording is by Spoon.

The Vancouver 2010 Paralympic Torch Relay will arrive in Vancouver March 11th and make a 24-hour loop around downtown until the Opening Ceremony March 12th. Events
Robson Square will host live entertainment as well as sponsor activities, sport demos and cultural craft displays. You will be able to skate for free on the ice rink and the free zipline will open up again March 12th at 10:00am.

Y.E.S! Vancouver (Young Executives for Success) is hosting a workshop March 23rd featuring panelists that will discuss how philanthropy fits into their lives.

Panelists include Chris Breikss of 6S Marketing Inc., Heather White of 2020 Communications, Judy Brooks of Blo, and philanthropic leader Matt Hill of Run for One Planet. The moderator will be Katrina Carroll-Foster, Co-Founder of Y.E.S! Vancouver and owner of WiseWinston.

I’ve had the opportunity to speak at a Y.E.S! event before so I can say that this networking group is inspiring, motivated, and probably some of the friendliest local executives (and small business owners) you’re likely to meet in one place. They also have a longstanding partnership with the non-profit, Dress for Success.

Dress for Success (DFS) Vancouver is a registered Canadian Charity that provides low income women with professional attire, career development tools and a network of support to help women thrive in work and in life.

The Olympics are gone but the excitement of the Paralympics is about the take over the town as LiveCity returns. One of the most popular attractions during the Olympics, LiveCity’s downtown location will re-open March 12th featuring pavilions and performances you might have previously missed due to long lines. â€œLiveCity Downtown will be a great place to take in the excitement, triumphs and achievements of Paralympic athletes from around the world,â€ said Vancouver Mayor Gregor Robertson. â€œThe site was a hub of celebration during the Games and we welcome everyone back to keep that level of excitement and support going for our Paralympic athletes over the next two weeks.â€

You can read more about what to expect during the Paralympics in this post, or read my article on the Opening Ceremony, which will feature a performance by Said the Whale.

There are names you see around town yet rarely place them or their historical significance. From Abbott to Tatlow or Shaughnessy, Malkin is right up there.

W.H. Malkin was a a major food wholesaler (Malkin’s Wholesale Grocers was at 57 Water Street) who became the Mayor of Vancouver 1929-1932. He slipped into the Mayor’s office between two of L.D. Taylor’s seven terms as Mayor of Vancouver and remained an important business figure in the City.

He oversaw the construction of the iconic Marine Building and was also the first Mayor of an amalgamated Vancouver, when Point Grey and South Vancouver officially became part of the City. Malkin was also the one in office when the legendary Commodore Ballroom officially opened in September of 1929. The ceremony was led by Malkin’s wife, Marion. It was in her honor that W.H. later dedicated the Malkin Bowl in Stanley Park. 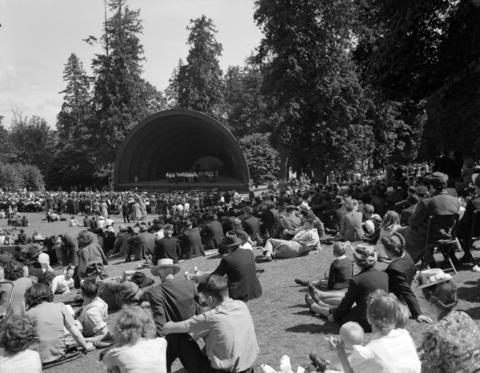 On May 21st, 1934 construction began on Malkin Bowl in Stanley Park. “The bowl was a gift to the city from Malkin as a memorial to his late wife Marion, who had died in 1933. Its formal name is the Marion Malkin Bowl.” [VancouverHistory] It replaced a circular bandstand with a Hollywood Bowl style structure.

In 1940 the first performance of Theatre Under the Stars took place at the Malkin Bowl, and over the years its seen many acts grace its stage. In 1982 an arsonist set fire to it, which ended up burning through decades of history. Names of performers that had been into its wooden walls were lost but the bowl was soon to be rebuilt. From Elvis Costello to the New Pornographers, the Malkin Bowl is still one of Vancouver’s most cherished live venues.