The 27th annual Whistler Pride and Ski Festival returns January 20 to 27, 2019. As one of the largest gay and lesbian ski weeks in North America, the festival brings a schedule packed with skiing and snowboarding, parties, daily après, a comedy night, and its signature pride ski parade. 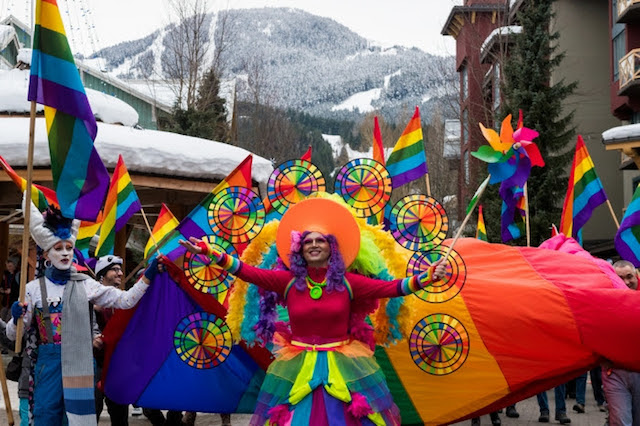 Festival guests will be eager to hit the slopes at Whistler Blackcomb as the resort recently celebrated a record-breaking 384cm of snowfall for the past month of December, making it Whistler Blackcomb’s snowiest December on record. Festival guests can enjoy the prime conditions with daily guided ski and snowboard groups followed by free après ski sessions at CABN in the Aava Whistler Hotel from January 21 – 26, 2019.

Flying High with Pam Ann January 23, 2019
Whistler Night of Comedy presented by Delta Air Lines
International celebrity entertainer Caroline Reid returns to Whistler as famed air-hostess Pam Ann, bringing with her a brand new show; an entertaining night of comedy not to be missed at the Whistler Conference Centre.

Whistler Pride SkiOUT and March January 25, 2019
Skiers and riders can join in the annual pride parade as participants swoosh down Olympic Run on Whistler Mountain towards the village. The parade will continue from the mountain base, through the Village Stroll and end at the Whistler Conference Centre where the festival’s T-Dance party will begin featuring DJ Corey Craig.

Jackie Beat is going Downhill Fast! January 26, 2019
Guests can join iconic drag star Jackie Beat at CABN along with her razor-sharp comedy and hysterical song parodies. After the show, DJ Foxy Moron will hit the stage for a night of dancing.

For guests looking to celebrate pride in Whistler, a wide range of accommodation along with Travel Alternative Group (TAG) approved options can be found throughout Whistler Village.