Canadian Icon, and star of Canada’s longest-running late-night show, Ed the Sock, is blazing through Western Canada on his War on Stupid Tour. Ed’s razor-sharp wit and fearless honesty have made him a hero to Canadians – especially us 90’s kids – and Right or Left, he’s going to spill your Kool-Aid. Ed’s War on Stupid multimedia tour tears it all apart, taking no prisoners and showing no bias. 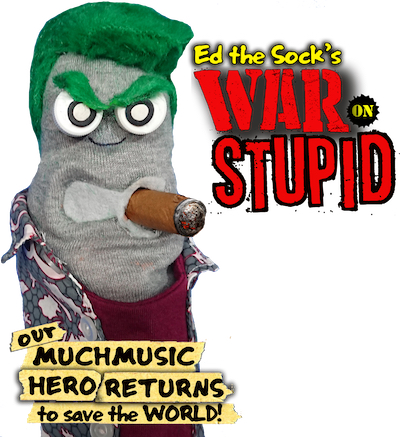 “You would watch me and I would say what you were thinking. I was your voice out loud. Then I went away for a while… and look what you’ve done with the place! Fact is opinion and opinion is fact. Literally also means figuratively. Knowledge isn’t power, power is spreading your lack of knowledge. Gen X’ers hate on Millenials without realizing who it was that raised them!” [See more of Ed the Sock on ET Canada]

In a special treat for fans of classic Muchmusic, Ed also unveils video clips of his interviews with celebrities & notable Muchmusic moments, spilling the beans on the backstage stories and celebrity politics never before revealed.

I have a pair of tickets to give away to the Vancouver show at the Biltmore! Here’s how you can enter to win:

Update The winner is Jason!