Montreal born and former Vancouver resident, Sean Casey Leclaire is pleased to bring his solo show, Small Town Boys, to the Vancouver Fringe Festival playing from September 6 to 16 at the Waterfront Theatre on Granville Island. This timely play is about the power of vulnerability in men, deep friendship as a form of love, and how a person can become whole and live with deeper awareness. The story is punch-in-the-gut tough, and hilarious at the same time. 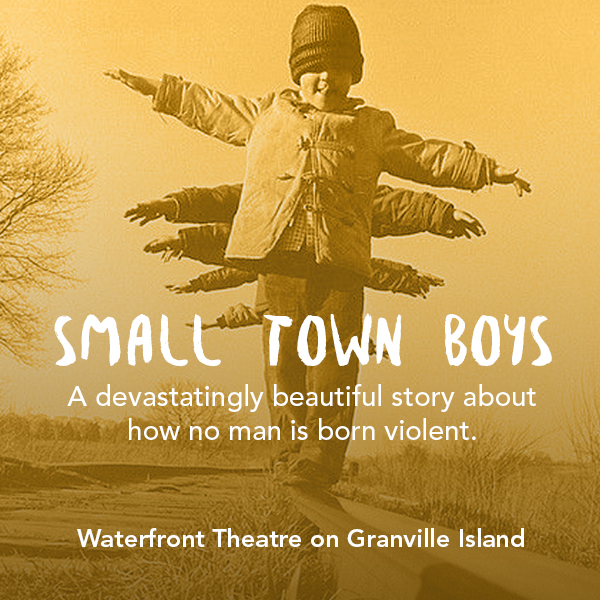 The play takes place in the 1970s, in a small-town tavern, and in various locations across Canada. The story is about a band of high school boys in a rough and tumble town near Montreal. After a life changing moment of violence in their lives, Small Town Boys illuminates the different paths their lives take.

The narrator, one of the boys, follows two older boys out west, and the journey unfolds in terrific and wacky ways. With ruthless self-scrutiny and compassion the story dives into the nature of deep friendship, forgiveness, and the fleeting and fragile moments that define our lives.

This solo show is written and performed by Sean Casey Leclaire, a Canadian now living in New York and Boston. Sean is a poet, actor, and an executive coach. He lived in Kitsilano in the 1980’s and was the former Managing Partner of Leclaire Hamilton Inc.

Directed by Lisa Dalton, a Fort Worth, Texas resident, Lisa is President of the National Michael Chekhov Association. She is a master teacher of Michael Chekhov¹s acting technique and a noted documentarian, and author.

I have a pair of tickets to give away to opening night on September 6th. Here’s how you can enter to win:

I will draw one winner at random from all entries at 12:00pm Wednesday, August 22, 2018. The Vancouver Fringe Festival runs September 6 to 16, 2018. Follow on Facebook and Twitter for more show information.

Update The winner is James!

Also on Miss604.com
« Campbell Valley Country Celebration 2018
Things to do in Vancouver This Weekend »