Early Music Vancouver (“EMV”) proudly presents the return of the Vancouver Bach Festival, July 30 – August 10, 2018 at Christ Church Cathedral in the heart of downtown and the Chan Centre for the Performing Arts at UBC.

Since its inaugural iteration in 2016, the festival has grown to offer a remarkable 15 concerts ranging from intimate chamber music programmes to concerts featuring full orchestra, soloists, and a choir. This year’s festival includes performances by many of the top west coast artists specializing in period performance, as well as by gifted artists from all over Europe. 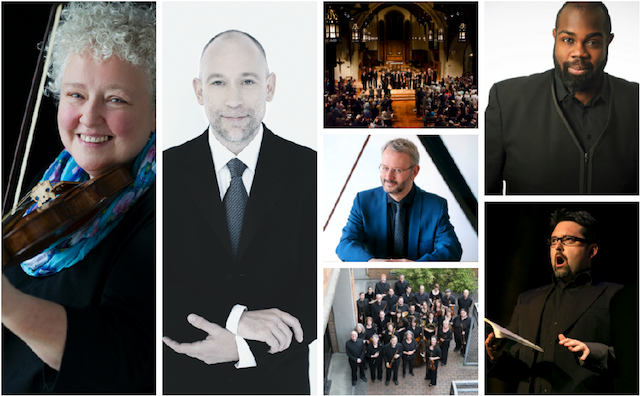 I have a pair of tickets to give away to the following shows:

Praised for his “crystalline diction and pure, evenly produced tone” (Miami Herald), countertenor Reginald L. Mobley makes his highly-anticipated Vancouver return, performing with musicians of Pacific Musicworks and led by revered GRAMMY Award-winning lutenist and conductor Stephen Stubbs. Featuring a rarely-performed dramatic cantata by Antonio Vivaldi – Cessate Omai Cessate, as well as one of J.S. Bach’s most beloved solo cantatas – BWV 82 / Ich Habe Genug, audiences will be spellbound by the beauty of Mobley’s voice and charmed by the warmth of his personality.

EMV is delighted to welcome Switzerland’s celebrated ensemble Gli Angeli Genève back to Vancouver to perform a selection of Early Cantatas by J.S. Bach (BWV 4, 131 and 106), as well as G.P. Teleman’s masterpiece Du Aber Daniel. Led by renowned baritone Stephan MacLeod, Gli Angeli Genève is an ensemble of soloists that performs vocal and instrumental repertoire of the renaissance, baroque and classical periods on stages the world over. They are widely considered one of Europe’s top ensembles specializing in Bach’s sacred music.

Bach, Beethoven, and Brahms have been considered the backbone of the Classical canon since the late nineteenth century. Baroque violinist Monica Huggett and fortepianist Byron Schenkman explore some of those composers’ most beloved works, using instruments and playing styles appropriate to the time when that canon was being established, including Early Music Vancouver’s magnificent 1870 Broadwood piano. The programme includes Bach’s great Chaconne in D minor for solo violin.

In celebration of Francois Couperin’s 350th anniversary, this programme includes his sumptuous trio sonata L’Impériale and a complete performance of one of the masterpieces of French baroque music, his surviving three Leçons des Ténèbres, for two sopranos, viola da gamba and basso continuo.

Vancouver’s own Alexander Weimann leads the PBO and the soloists of Gli Angeli Genève in a dramatic reading of one of Bach’s greatest works of mourning, the Trauer Ode. Bach composed this large-scale secular cantata for orchestra and soloists in 1727 to commemorate the death of Christiane Eberhardine, the wife of Augustus, the Elector of Saxony and King of Poland. It is unusually richly scored, even for Bach, and includes not only pairs of flutes and oboes d’amore, but also of violas da gamba and lutes in addition to a full string orchestra. This great work will be performed alongside another masterpiece by Bach, his cantata BWV 146 – Wir müssen durch viel Trübsal.

Update The winner is Angela M!