Combine the Steveston Salmon Festival, fireworks, headliners Big Sugar, and you one excellent roster of Canada Day festivities in Richmond! 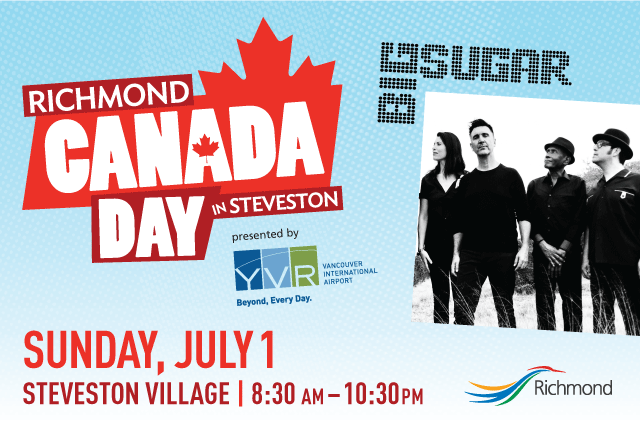 Highlighting the day is the Steveston Salmon Festival, known as Canada’s biggest little birthday party, the festival is famous for its salmon barbecue where over 1,200 pounds of wild salmon filets are grilled over open fire pits. An annual tradition since 1945, the Salmon Festival also features a huge Canada Day Parade through historic Steveston Village.

The Street Party also features an artisan village, marketplace and plenty of food trucks. New this year is the Hockey Zone, featuring a fun 3-on-3 competition in honour of Canada’s favourite national sport, with a special guest appearance by Vancouver Canucks mascot Fin.

Visitors can also explore the Village with additional activities at the Gulf of Georgia National Historic Site, Steveston Interurban Tram and Steveston Museum.

The day kicks off with Salmon Festival’s pancake breakfast at 6:30am, followed by a special Canada Day flag raising ceremony at 8:40am. The Canada Day Parade gets underway at 10:00am.

Big Sugar will hit the Bayview Stage at 9:00pm, followed immediately at 10:15pm. by a fantastic fireworks show along the historic Steveston waterfront, presented by Dueck GM.