Royal City Musical Theatre presents Cabaret, the landmark musical from director/producer Harold Prince, and songwriters John Kander & Fred Ebb. A Tony Award winning musical that has been a play, a musical, and a film. 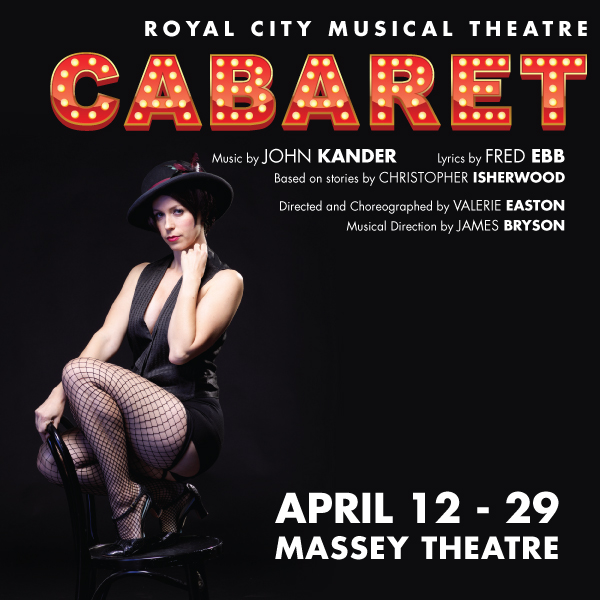 Since opening on Broadway in 1966 the show remains a devastatingly relevant work of art and continues to be both entertaining and unsettling.

Based on a book written by Christopher Isherwood, Cabaret is set in 1931 Berlin in the seedy glamour of the Kit Kat Klub. It’s bawdy Emcee, hard living entertainer, Sally Bowles and a raucous ensemble take the stage nightly to tantalize the crowd and leave their troubles outside. This decadent nightlife takes place during a disturbing time with the collapse of Weimar Germany and the rise of the Nazi Party.

Come hear some of the most memorable songs in theatre history, including “Cabaret,” “Willkommen” and “Maybe This Time” along with dance numbers, a love story, and with an overwhelming wake up call and a reminder to be vigilant, that things can change so quickly that suddenly without you knowing, you’re in a scary world.

Come and leave your troubles outside – life is beautiful at the Cabaret – all about following your heart while the world loses its way.

Update The winner is Andrea!