One of the things I love move about the JUNO Awards, on top of celebrating the best in Canadian music, is that whenever they roll into their host city, plenty of concerts, activities, and fun things happen during JUNO Week (this year’s being March 19-25 in Vancouver). The event announcements keep coming and today’s news is about the 15th annual JUNO Cup presented by CBC Sports.

When: Friday, March 23, 2018 at 7:3pm
Where: Bill Copeland Sports Centre (3676 Kensington Ave, Burnaby)
Tickets: Individual tickets to the JUNO Cup are priced at $20 (plus fees). Tickets are available online. $15 tickets (plus fees) are available when purchasing 10 or more, with all proceeds benefiting MusiCounts. 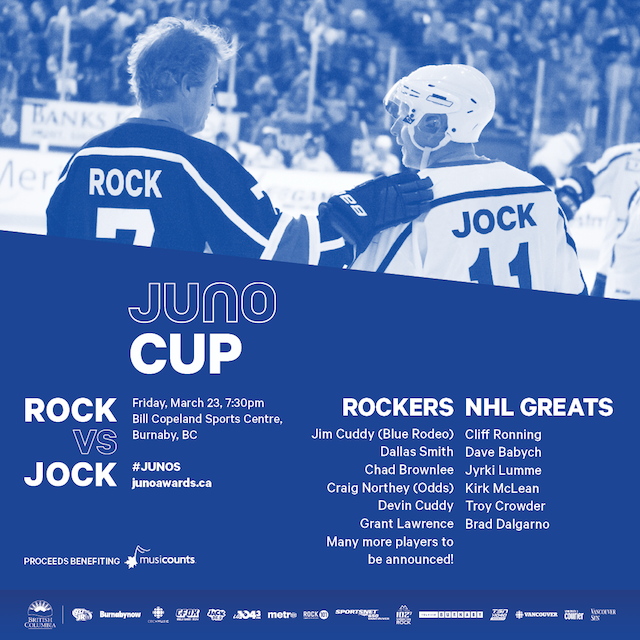 Taking place during JUNO Week, this annual celebrity hockey game has raised over $840,000 for MusiCounts. The charity associated with CARAS puts instruments in the hands of kids who need them most and supports music education initiatives across Canada.

JUNO Week in Vancouver takes place March 19-25, 2018, culminating with the awards gala. This will be the fourth time that Vancouver will host Canada’s Music Awards ceremony; shows previously took place in 1991, 1998, and 2009. Follow the JUNO Awards online with the tag #JUNOS on Facebook, Instagram, and Twitter.

Also on Miss604.com
« Things to do in Vancouver This Weekend
Vinoscenti Vineyards Presents: European Wine & Culture 2018 »