The 47th annual JUNO Awards and JUNO Week 2018 will be hosted in Vancouver from March 19 through March 25, 2018, culminating in The JUNO Awards Broadcast on CBC on Sunday, March 25, taking place at the Rogers Arena. During the ceremony, an iconic act will be inducted into the Canadian Music Hall of Fame.

The Canadian Academy of Recording Arts and Sciences (“CARAS”) and CBC are pleased to announce the 2018 inductee into the Canadian Music Hall of Fame will be world-renowned rockers Barenaked Ladies – Ed Robertson, Jim Creeggan, Kevin Hearn and Tyler Stewart – alongside original member, co-founder and singer-songwriter Steven Page. 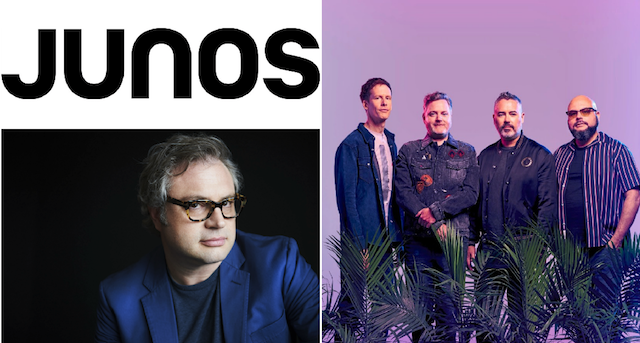 Barenaked Ladies to be Inducted Into Canadian Music Hall of Fame

Formed in 1988 in Scarborough, Ontario, the chart-topping Barenaked Ladies have been making music for three decades and have sold over 15 million albums worldwide. The band’s style has evolved significantly over the course of their career, favouring acoustic in the early days and growing to encompass a mixture of genres.

The 1991 release of The Yellow Tape, initially meant as a demo cassette, would go on to become the first independent tape to ever achieve platinum status, with over 100,000 copies sold in Canada. Following multiple indie cassette releases, the band signed to Sire Records, with whom they released their first full album entitled Gordon. Gordon was a cultural phenomenon in Canada and was certified Diamond (selling over 1 million records).

Stunt, released in 1998, would become the band’s most commercially successful record, climbing all the way to No.3 on the Billboard album chart, anchored by the smash hit “One Week,” which peaked at No.1 on the Billboard Hot 100.

This will be the fourth time that Vancouver will host Canada’s Music Awards ceremony; shows previously took place in 1991, 1998, and 2009. Tickets are available starting at $59 (plus fees) through the Rogers Arena Box Office, by phone at 1-855-985-5000 and online at ticketmaster.ca.

Also on Miss604.com
« The Science Of Ripley’s Believe It or Not!
Ballet BC Presents Romeo + Juliet: Win Tickets »