The Museum of Anthropology (“MOA”) along with the Musqueam Indian Band present the inspiring and interactive new exhibition The Fabric of Our Land: Salish Weaving, running from November 19, 2017 to April 15, 2018.

Curated by MOA Curator Susan Rowley, in collaboration with Salish weavers, the exhibition will feature the historically significant, but relatively unknown, loom-weaving tradition of Salish peoples, showcasing one of the world’s largest collections of intricately designed blankets on loan from contemporary weavers, as well as museums in Europe and the eastern United States. 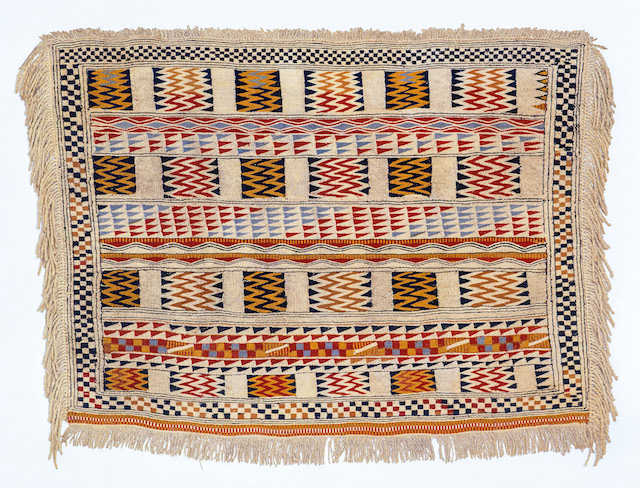 Collection of the National Museum of Finland. Photo: Markku Haverinen.

The Fabric of Our Land: Salish Weaving

The exhibition is the result of a request from Musqueam Councillor and master weaver Wendy Grant John, who after viewing some of the weavings at the Smithsonian in Washington, DC was struck by their power to impart knowledge and inspiration to Salish weavers and the public. She has worked for more than 30 years to bring transformative change to Indigenous communities across the country and build stronger relationships between Aboriginal and non-Aboriginal people.

“The process of colonization took the same devastating toll on Salish weaving as it did on countless other Indigenous cultural practices,” said Rowley, MOA Curator. “Mass-produced Hudson Bay Company blankets replaced hand-woven creations, the reserve system constrained access to required resources, the Indian Act banned ceremonies where blankets played an integral role, and residential schools broke the intergenerational transmission of knowledge. The resilience and strength of amazing women have led to the revival of Salish weaving in different communities at different times.”

The Fabric of Our Land: Salish Weaving will take visitors on a journey through the past 200 years of Salish wool weaving from the early 1800s through to today’s vibrant Renaissance.

Ten of the earliest known Salish weavings are showcased in the exhibition on loan from the National Museum of Finland, the Perth Museum (Scotland), the Pitt-Rivers Museum (England), the Harvard Peabody Museum, and the Smithsonian Institution’s National Museum of Natural History. These institutions acquired these treasures from early traders and explorers who removed them from their traditional territories. Territories encompass the Lower Mainland of British Columbia, southeastern Vancouver Island, the Sunshine Coast, the Fraser Canyon, and Puget Sound.

These early works will be featured alongside five mountain goat wool blankets from MOA’s collection dating from the late 1800s and early 1900s. More than 20 weavings from the 1960s to present day – some from MOA’s collection and others on loan from contemporary weavers – will demonstrate the continuity of weaving despite colonization.

At various times throughout the run of the exhibition, Musqueam master weaver and educator Debra Sparrow will reactivate an old loom from MOA’s collection by weaving a new blanket. Visitors will also have the opportunity to further their understanding by learning through doing at several looms in the exhibition space.

I have a family 4-pack of tickets to give away for the opening day of this exhibition, on Sunday, November 19, 2017. Here’s how you can enter to win:

[clickToTweet tweet=”RT to enter to win @Moa_ubc passes for The Fabric of Our Land: Salish Weaving http://ow.ly/jB2q30gtJsa” quote=” Click to enter via Twitter” theme=”style6″]

I will draw one winner at random from all entries at 12:00pm on Thursday, November 16, 2017. Follow MOA on Twitter and Facebook for more information about this exhibition and more.

Update The winner is Nathalie Lopez!

Also on Miss604.com
« Things to do in Vancouver This Weekend
Building a Future for Birds in Stanley Park »