The Chan Centre for the Performing Arts at UBC presents Ruthie Foster, Jimmie Dale Gilmore, and Carrie Rodriguez, the Lone Star State’s diverse and celebrated songwriters on November 8th at the Chan Shun Concert Hall. Performing as part of of the Texas Troubadours project, these three distinctive voices come together for the first time to swap songs and collaborate. 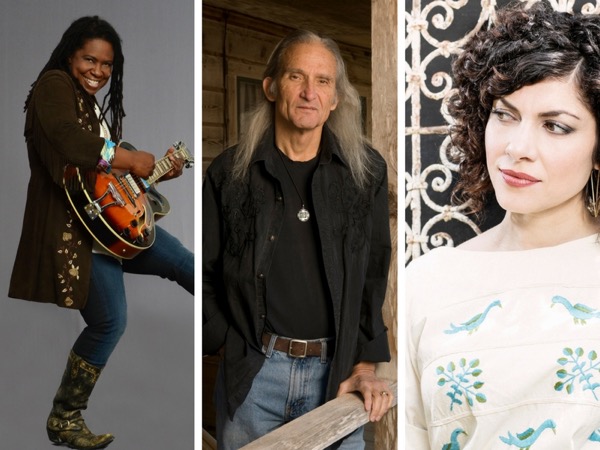 Born and raised in the small town of Gause, Texas, Ruthie Foster has been described by Rolling Stone as “pure magic to watch and hear.” Taking inspiration from such singers as Mavis Staples and Aretha Franklin, she developed her own soulful sound tied to several southern-rooted styles. She has recorded three GRAMMY-nominated albums: The Truth According to Ruthie (2010), Let it Burn (2012), and Promise of a Brand New Day (2014). In 2017, Foster released Joy Comes Back, an album showcasing her power-house voice on honest and heartfelt songs blending blues, folk, soul and gospel.

Hailing from the West Texas town of Lubbock, Jimmie Dale Gilmore’s career spans more than five decades. Like Foster, his inspired music cannot be categorized but combines elements of folk, rock, country, blues and bluegrass. Gilmore pursued his first solo project, Fair & Square (1988), and recorded several more albums which brought international success, and resulted in Rolling Stone naming him ‘Country Artist of the Year’ for three consecutive years. His latest solo album, Come on Back (2005), was dedicated to the memory of his late father, and garnered him a GRAMMY nomination.

Carrie Rodriguez, an Austin native, began her musical journey as a classical violin prodigy, having by the age of 10 already performed at Carnegie Hall. Following a year studying in the classical department at Oberlin Conservatory, she pledged herself to her true love: the fiddle. Rodriguez’s career took flight when she joined forces with Chip Taylor (the songwriter of Angel of the Morning and Wild Thing) to produce four critically-aclaimed duet albums. For her latest release, the 2016 Spanish-English album Lola, Rodriguez looked to the legacy of her great aunt –1940s-era Chicana singing sensation Eva Garza. The album was recognized by NPR as one of 2016’s top 30 releases.

A series of ancillary events programmed in conjunction with Chan Centre performances, exploring the role of arts and artists in society. There will be a Pre-Show Talk on Wednesday, November 8, 2017, 7:15pm at the Chan Centre’s Royal Bank Cinema. JUNO award-winning songwriter and multi-instrumentalist Shari Ulrich discusses the power of “the song,” shedding light on this fascinating art form from an artist’s perspective.

Win a Date Night with Dinner and Tickets

The Chan Centre has offered up two tickets for a lucky Miss604 reader to see the Texas Troubadours, along with a set dinner menu for two at Sage Restaurant ahead of the show.

You can view the set menu for the Texas Troubadours pre-show dinner online now. Sage Restaurant is located at UBC (6331 Crescent Rd, Vancouver) across from the Chan Centre. Follow the Chan Centre on Facebook, Twitter, and Instagram for the latest show info.

I will draw one winner at random from all entries at 12:00pm on Tuesday, November 7, 2017. Prize must be redeemed/used on the same day as the show. A reservation will be made for the winner and their guest.

Update The winner is Eileen Hwang!

Also on Miss604.com
« Things to do in Vancouver This Weekend
Lindt Chocolate Shop Grand Opening at The Exchange Tower in Downtown Vancouver »