Remembrance Day, November 11th, is a day to remember the courage, service and sacrifice of thousands of men and women, and to honour them by never forgetting them.

Your city will most likely have a service or ceremony on November 11th, around its local cenotaph, and to make things easier I have rounded up a list of events (that have been publicized, as of the date of publishing of this post) that you can attend.

If I am missing an event, please feel free to leave a comment with details and I will be sure to add it to the list.

Event: Vancouver Ceremony at Victory Square
Where: Victory Square Cenotaph at W Hastings St and Cambie St
When: 10:00am
Details The ceremony will begin with a performance by the Vancouver Bach Youth Choir and Sarabande. At 10:10am veterans, military marching units, and bands will be led to Victory Square by the Vancouver Flag Party for the cenotaph ceremony. Shortly afterward, there will be a combined performance by Vancouver Fire and Rescue Services and the Regimental Pipes and Drums of the Seaforth Highlanders of Canada. At 11:00am the Last Post will be sounded. Two Minutes of Silence, during which a 21-gun salute by the 15th Field Artillery Regiment will be heard from Portside Park. Lament and Rouse will follow. The Royal Canadian Air Force will conduct a fly-past moments later, weather permitting. The enduring In Flanders Fields will then be sung by the Bach Youth Choir and Sarabande and wreaths will be placed at the Cenotaph.

The Remembrance Day parade will begin once the ceremony finishes. Participants will march west along Hastings past the reviewing stand between Homer and Richards, turning right at Richards, east on Cordova, then south on Cambie. The veterans’ section of the parade will march west along Hastings Street past the reviewing stand and disperse.

Event: Remembrance Day at Mountain View Cemetery
Where: Celebration Hall, Mountain View Cemetery (5455 Fraser St, Vancouver)
When: 11:00am to 2:00pm
Details All performances are free and accessible and take place in the Celebration Hall. Also on display will be our collection of archival photos of Canadian forces in WW2 as well as the early years of the Veterans Housing Project.

Event: Remembrance Day Ceremony at UBC
Where: War Memorial Gymnasium, UBC (6081 University Boulevard)
When: 10:30am
Details: The annual Remembrance Day Ceremony at UBC is a special annual commemorative ceremony on November 11th in the UBC War Memorial Gym to engage the on and off UBC campus community in paying tribute to the men and women who have made tremendous sacrifices and have selflessly served our country in the defence of peace and freedom.

Event: Vancouver Community Remembrance Day
Where: CRAB Park at Portside
When: 10:55am

///Event: North Vancouver Service
Where: Centennial Theatre
When: 6:30pm to 9:30pm
Details A commemoration of the brave women and men who have kept our freedom alive, this concert will honour our veterans, living and dead, with music from the soul. The dark-hued and somber sounds of the viola, played by our brilliant Principal Violist Isabelle Roland, will be featured in intensely personal and moving works by Paul Hindemith and John Williams.
Pre-concert chat with Maestro Clyde Mitchell at 6:30pm.

Event: Remembrance Day Service & Parade North Vancouver
Where: Victoria Park Cenotaph
When: 10:30am to 11:30am
Details Join Mayor Mussatto at the North Vancouver Remembrance Day commemoration ceremonies. 2018 marks the 100th anniversary of the end of WWI. The park is located in the 100 block of East Keith Road and Lonsdale Avenue. Expect traffic delays in the area.

Event: West Vancouver Service
Where: Memorial Park (Marine Drive between 19th & 20th St, West Vancouver)
When: 10:45am to 11:30am
Details The Royal Canadian Legion – West Vancouver Branch #60 holds the sacred trust of ensuring the tradition of Remembrance is observed by Canadians every year at the 11th hour on the 11th day of the 11th month. This service is for the public to gather and honour our veterans and those currently serving in the Canadian Armed Forces. All members of the public are welcome and encouraged to attend.

Event: Chor Leoni: One Last Song
Where: West Vancouver United Church (2062 Esquimalt Ave, West Vancouver)
When: 1:30pm to 3:00pm
Details Chor Leoni continues its beloved tradition of Remembrance Day concerts with a program of powerful music paired with thoughtful readings focused on the 100th anniversary of Vimy Ridge and its mythic place in Canadian history. Musical highlights include Kurt Bestor’s Prayer of the Children and a new setting of In Flanders Fields by Michael Betteridge. As always the concert closes with The Last Post and the singing of Rupert Lang’s Kontakion. All seats reserved. 1-877-840-0457 or go online to book.

Event: Chor Leoni: One Last Song
Where: St. Andrew’s-Wesley United Church (1022 Nelson St at Burrard, Vancouver)
When: 8:00pm
Details Chor Leoni continues its beloved tradition of Remembrance Day concerts with a program of powerful music paired with thoughtful readings focused on the 100th anniversary of Vimy Ridge and its mythic place in Canadian history. Musical highlights include Kurt Bestor’s Prayer of the Children and a new setting of In Flanders Fields by Michael Betteridge. As always the concert closes with The Last Post and the singing of Rupert Lang’s Kontakion. 1-877-840-0457 or go online to book.

Event: New Westminster Remembrance Day
Where: 10:30am to 11:30am
When: City Hall Cenotaph (511 Royal Ave, New Westminster)
Details Outdoor service at Cenotaph located in front of City Hall 511 Royal Avenue. The service will commence at 10:30 am. Parade assembly 10:25 am at Queens Avenue and 6th Street. Wreath pick up from tent on City Hall front lawn beginning at 8:00am. All members of the public are invited to attend.

Event: Richmond Remembrance Day
Where: City Hall Cenotaph (6911 No. 3 Road, Richmond)
When: 10:20am
Details A parade will start marching at 10:20am towards the cenotaph, which is located on the east side of City Hall. The parade includes the Royal Canadian Legion, Canadian Army, Navy and Air Force Veterans Association members, Richmond’s permanent Canadian Forces Unit 39 Service Battalion and representation from public safety agencies and cadet organizations. All in attendance are invited to a Remembrance Day reception in the City Hall Galleria. This is a free event where people can warm up with a hot drink and snack, discuss the ceremonies, connect with other community members, and view a number of special displays put together by the City of Richmond Archives and the Friends of the Richmond Archives. Richmond’s Remembrance Day service will also be streamed online.

Event: South Burnaby Remembrance Day
Where: South Burnaby Cenotaph (Bonsor Park at Imperial St and Nelson Ave)
When: 10:30am
Details Parade begins at 10:30am from Fire Hall #3, 6511 Marlborough Ave, and proceeds west on Bennett St, south on Nelson Ave and southwest onto Jubilee Ave. Ceremony begins at 11:00am at the cenotaph in Bonsor Park. 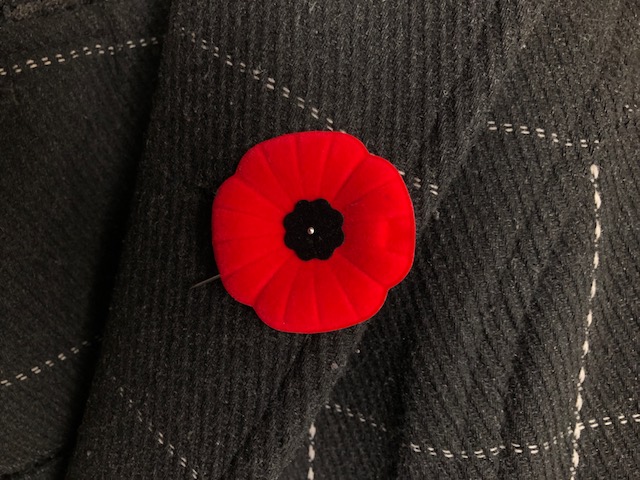 Event: Surrey Remembers
Where: Veterans’ Square (17671 Highway 10 (56 Ave)
When: 9:30am to 1:30pm
Details A Remembrance Day service commemorating Canadian soldiers will take place at 10:25am. Organized by the Cloverdale Legion, the large annual event typically draws crowds wishing to pay their respects. Visitors are invited to warm up at the Surrey Archives from 9:30am to 1:30pm for family friendly activities, including refreshments, crafts, wartime displays and the opportunity to write postcards for war veterans. Free public parking is available throughout Cloverdale and at Cloverdale Traditional Elementary School. Please note the Surrey Museum and parking lot are currently closed due to construction.

Event: Langley Remembrance Day
Where: Douglas Park Cenotaph (20550 Douglas Crescent, Langley City)
When: 10:30am
Details Join Langley Legion Branch 21 for the Remembrance Day parade and ceremony. The event starts at 10:30am. For more information contact the Langley Legion at (604) 534-3615.

Event: Coquitlam Remembers
Where: Como Lake Middle School & Cenotaph at Blue Mountain Park
When: 9:45am
Details The Royal Canadian Legion # 263 will host a traditional Remembrance Day ceremony at the Blue Mountain Park Cenotaph. The ceremony will start at 9:45am at Como Lake Middle School (1121 King Albert Ave), followed by a parade starting at 10:30am along Winslow Ave to the cenotaph on Veteran’s Way. The service at the cenotaph will begin at 11:00am followed by a veteran, police and Fire/Rescue parade to the Royal Canadian Legion, Branch 263 (1025 Ridgeway Ave) Grandchildren and great grandchildren are invited to march with the veterans. Lunch will be available at the Legion for a nominal fee, followed by live music and other activities.

Event: Port Coquitlam Remembrance Day
Where: Wilson Centre (2150 Wilson Ave)
When: 9:30am and 11:00am
Details This is an indoor service and there is seating available. Following the Wilson Centre Service, veterans and members of the Royal Canadian Legion, Branch #133 will lead a parade from the Wilson Centre along Wilson Avenue to Shaughnessy Street to the Cenotaph services at Veterans Park (2580 Shaughnessy St). This is an outdoor service. Seating is limited and reserved for the veterans in attendance. Those attending the Cenotaph Remembrance Day Service are encouraged to dress warmly and to bring an umbrella in the event of rain.

Event: South Delta Remembrance Day
Where: Cenotaph at Memorial Park (47 Ave & Garry St, Ladner)
When: 10:15am
Details The Royal Canadian Legion Branch 61 and the Corporation of Delta invite you and your family to attend a parade and wreath laying ceremony in Ladner. The parade begins at the Legion branch (4896 Delta Street), at 10:15am. Ceremony to commence at the Cenotaph at Memorial Park in Ladner at 10:45am.