Visit the tallest living Christmas trees in the world during Canyon Lights at Capilano Suspension Bridge Park this season! Enjoy hundreds of thousands of lights throughout the park including an illuminated Treetops Adventure, Cliffwalk, rainforest and canyon which will be transformed into a world of festive lights and visual enchantment. 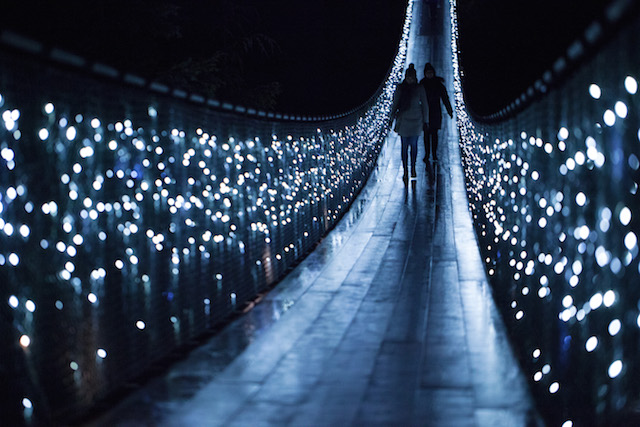 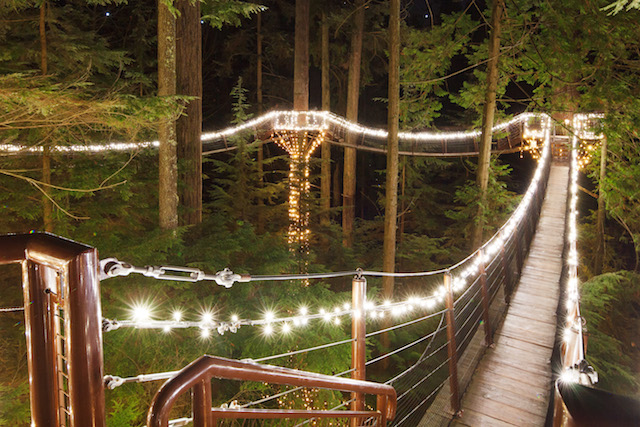 This year the 30-ton Douglas firs of Treetops Adventure receive star treatment. Treetops Adventure is a series of seven suspension bridges attached to eight 250 years old Douglas-firs with viewing platforms, reaching up to 110 feet above the forest floor. These magnificent Douglas firs will be lit above and below the collars, making these trees the eight tallest Christmas trees in the world!

Back by popular demand, go on a Snowy Owl Prowl, decorate gingerbread cookies (by donation) and sing-along carols with the holiday band. Two new children’s activities this year include decorating wooden ornaments and make your own holiday badge (by donation) in the Winter Craft Tent.

Pro Tip: If it’s open, grab a hot chocolate or pumpkin spice latte (with locally roasted Moja Coffee) in the Bridge House and purchase your tickets right there too. It’s on the same side of the road as the parking lot. Then when you’re ready, head over to the entrance to the park.

Canyon Lights is now in its 12th year and for the 9th year, I have an awesome prize package up for grabs! It includes a family pack of passes to Canyon Lights (2 adults and 2 kids 16 and under), vouchers for fudge at the Trading Post Gift Shop, and some hot chocolate to warm you up. Here’s how you can enter to win:

I will draw one winner at 12:00pm on Monday, November 27, 2017. Capilano Suspension Bridge Park is located at 3735 Capilano Road, North Vancouver. Follow on Twitter and Facebook for more information about Canyon Lights and year-round activities.

Update The winner is Lisa Smith!