Returning to Greater Vancouver for the first time since 2010, Menopause the Musical will take to the stage at the Bell Performing Arts Centre in Surrey, and at the Vogue Theatre in Vancouver this week. It’s the longest-running scripted musical in Las Vegas history, and there’s a reason why it’s so successful: It’s the ultimate girls’ night! 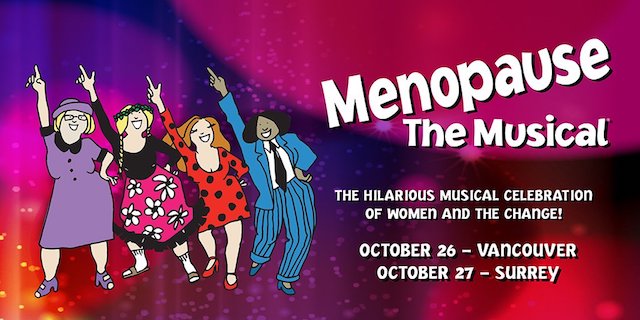 Set in a department store, four women with nothing in common but a black lace bra… come to realize they have more to share than ever imagined. The All -Star Canadian cast makes fun of their hot flashes, night sweats, mood swings, wrinkles, not enough sex, too much sex, chocolate binges and a whole lot more.

Tickets are available now for Vancouver and the second night in Surrey.

Written by a woman (Jeanie Linders) for women, the show features 25 hits of the 60s, 70s, and 80s. I spoke with the show’s producer, Mark Zimmerman, about how he brought Menopause the Musical to Canada a dozen years ago and how it continues to be such a success.

“It’s so relatable,” Mark told me over the phone from the show’s Kelowna stop. “I think also why it is so successful is that years ago menopause was somewhat in the closet, certainly my parents never talked about it.”

He says that what happens is that women no longer see themselves as alone, going through this change of life alone.

“In the four characters on stage, they see themselves.”

When Mark first brought Menopause the Musical from Las Vegas to Toronto, it played for 513 consecutive shows. It’s now traveling across Canada with half a dozen stops in BC.

“It’s impossible not to laugh!”
THE NEW YORK TIMES

“Not only do the actors bond on stage and become best of friends through the show, but the women in the audience become almost like a sisterhood and they bond over the relatedness of the topic.”

While the subject matter is for women, by women, and at some theatres even serve up whimsical cocktails like the Menopaus-litan, and Estro-gin and Tonic, men are of course welcome at the show too.

“Yes there are small numbers of men in the audience, but men do love the show. They actually walk away with a closer appreciation of what their partner is going through because they see how similar these symptoms are and what the change of life holds. It brings people closer together.”

Mark says that this show has a power. It’s a power to bring people together over a common experience, laughter, life, and great music.

I have a pair of tickets to give away to the show on Sunday, October 29th in Surrey. Here’s how you can enter to win:

Update The winner is Kellie Nehring!

Share324
Tweet42
Share
Pin2
Email
Reddit
WhatsApp
368 Shares
Current Contests on Miss604
*All contests are open to residents of Canada only, unless otherwise stated. Contest timelines are published on each individual post along with entry methods. Some contests may only be open to those 19 years of age and older. Winners are announced on the contest blog posts. Contest policy »

Also on Miss604.com
« A Full Okanagan Valley Experience with Dax Justin
Festival of Hallows in Yaletown »