Created and produced by Project: Humanity, Freedom Singer is a new documentary theatre piece co-created by Khari Wendell McClelland and Project: Humanity’s Andrew Kushnir with CBC journalist Jodie Martinson. It was inspired by the journey of singer-songwriter McClelland in retracing his great-grandmother’s steps to escaping slavery in the United States. 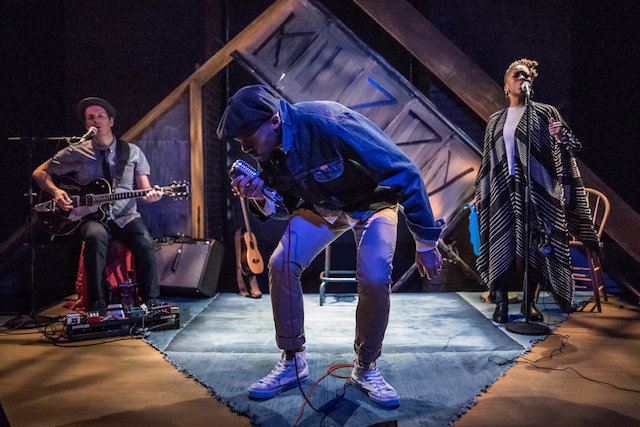 Freedom Singer premiered on stage in Toronto in February 2017 and is now on a cross-country tour, with a stop in Vancouver this fall at the Goldcorp Stage at the BMO Theatre Centre.

In 2015, Juno Award nominee McClelland retraced the steps of his great-great-great-grandmother Kizzy, and using contemporary styles like hip hop, funk and soul, he personalized the songs that likely accompanied her and thousands of others as they escaped US slavery. In sharing this music, Khari is brought face to face with his own “unrecorded” heritage, and the realities and myths of one of our quintessential historic narratives: the Underground Railroad.

The Detroit-born, Vancouver-based singer/songwriter talked to historians, museum curators, and descendants of slaves. His journey was recorded for a CBC documentary.

October 8th is a Pay What You Can performance (admission at the door), October 10th has ASL Interpretation and a Talkback, and October 17th is also a Talkback performance.

I have a pair of tickets to give away to opening night of Freedom Singer on October 7th, here’s how you can enter to win:

I will draw one winner at random from all entries at 12:00pm on Monday, October 2, 2017. Follow Urban Ink on Twitter and Facebook for more information about this production.

Update The winner is @carmentsemakeup!