Each season Major League Soccer clubs recognize a community champion and this year Sandy Teel, strong supporter of Covenant House Vancouver, is the selection for Vancouver Whitecaps FC. As the Whitecaps’ Community MVP, she is now entered into the running to become the MLS Works Community MVP, where she could win $25,000 for the charitable cause of her choice. 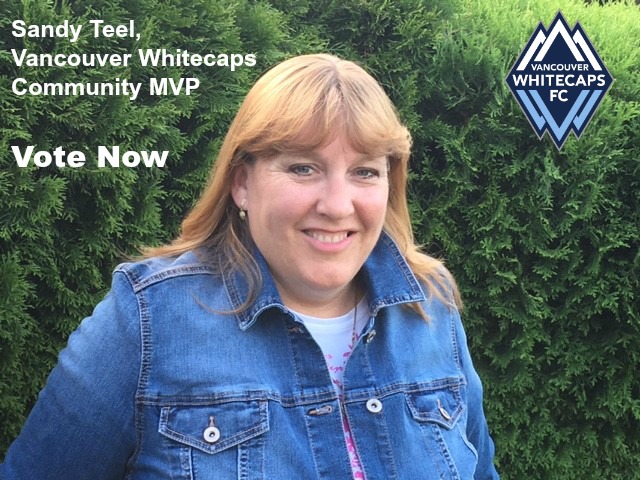 Sandy and her whole family are incredible supporters of Covenant House and you can read why she was selected as the Vancouver Whitecaps FC Community MVP:

Sandy Teel is living proof that acts of kindness can change lives. Her son, Andrew Teel, spent his early childhood growing up in many different foster homes. Some of his foster experiences were very negative, but Andrew’s life changed forever when he was adopted by Sandy and her husband. Sandy has helped Andrew overcome the negative experiences of his childhood by sharing her passion for soccer and helping him find positive ways to give back to their community.

MLS Works is Major League Soccer’s community outreach initiative. It is dedicated to addressing important social issues and serves as a platform for both league and club philanthropic programs.

One Community MVP finalist from each of the 22 clubs has been chosen to receive an all star prize package and $1,000 for the cause of their choice and one Grand Prize winner will be announced during halftime of the 2017 MLS All-Star Game presented by Target and receive a $25,000 donation for a charitable cause.

You can help ensure that the winner is Sandy, and Covenant House Vancouver! Voting ends Wednesday, August 2nd at 11:00am PT so be sure to cast your vote daily.